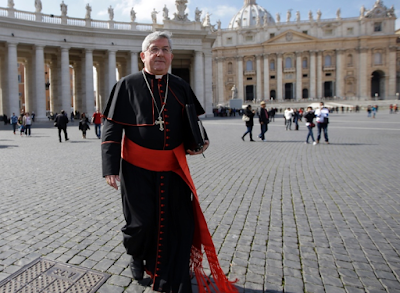 Released this morning in Rome.

[01661-EN.01] [Original text: English]
Relatio – Circulus Anglicus “D”Moderator: Card. COLLINS Thomas ChristopherRelator: S.E. Mons. CHAPUT, O.F.M. Cap. Charles JosephThose of us taking part in Circle D are grateful to Pope Francis for calling for this synod, and we are honored to be part of the process. We also want to express our gratitude for the hard work embodied in the Instrumentum Laboris (IL). We suggest that the document should start just as we begin any celebration of the Mass – with a kind of Confiteor, putting ourselves in the midst of the failures of the members of the Church, rather than judging them from the outside. We need to acknowledge and ask forgiveness for our own mistakes as pastors, especially those that have undermined family life.We had two general observations:First, while various elements of the IL are admirable, we found much of the text to be flawed or inadequate, especially in its theology, clarity, trust in the power of grace, its use of Scripture and its tendency to see the world through overwhelmingly Western eyes. Second, we felt limited in our ability to respond by not knowing clearly who the audience of the document is. In other words, are we writing to the Holy Father, to families of the Church, or to the world?Most of our group felt the IL should begin with hope rather than failures because a great many people already do successfully live the Gospel’s good news about marriage. Our group expressed concern that readers will simply ignore the document if it begins with a litany of negatives and social problems rather than a biblical vision of joy and confidence in the Word of God regarding the family. The huge cloud of challenges pervading the first section of the text unintentionally creates a sense of pastoral despair.Several group members felt that Section II should precede Section I. Others supported the current arrangement of the text. A shared concern was that most people won’t read a dense or lengthy document. This makes the IL’s opening section vitally important; it needs to inspire as well as inform. Additionally -- recalling the work of Aparecida -- members stressed that the focus of the text should be on Jesus, through whom we describe and interpret the world’s present situation. We should always begin with Jesus.If marriage is a vocation, which we believe it is, we can’t promote vocations by talking first about its problems.As the Trinity is the source of reality, and because all communities originate in the community of the Trinity, some thought that the Trinity should be the document’s starting point.Members noted that in his letters, St. Paul would often write a prologue of praise to people whose sins he would then critique. This was a common style in his epistles, and effective.Our group thought there were a number of elements missing from the text: a serious reflection on gender ideology, more reflection on pastoral care for the differently-abled, the role of fathers and men as well as the role of women, and a deeper treatment of the destructive nature of pornography and other misuses of electronic technology.Members criticized many of the paragraphs in the first section. Some thought the presentation was chaotic, without inherent logic. Sentences seemed to be tossed together without any organic connection to one another.Some thought the text worked well because the family today does, in fact, face serious problems. That’s why we’re here at the synod: to deal with those problems; and people who suffer want to see their reality touched by what we say. So it’s important to speak in a way that will draw people’s attention.Still others thought that the text lacked anything that would attract people. If the document is destined to the general public, they felt that stories from family life, or the lives of the saints along with illustrations, should be included to make the material more compelling. They stressed the need to review the language of the document and ensure that it appeals to both men and women, leaving no one out.Members worried that the English translation may not be faithful to the official Italian text. Others complained that many of the document’s statements were too general and not specific enough. Still others felt the text had many inaccurate generalizations, was verbose and repetitive.Members said that some of the sections seemed narrow in scope and excessively inspired by West European and North American concerns, rather than a true presentation of the global situation. Some of the members thought that terms like “developing nations” and “advanced countries” were condescending and inappropriate for a Church document. Others thought that the language of the text was too careful and politically correct, and because of that, the content was unclear and sometimes incoherent. Wonderfully good points were made in some paragraphs, but they were addressed too briefly and in a poorly developed manner. They seemed to be simply pulled together and listed, rather than presented logically.Overall, members felt that Pope Francis and the people of the Church deserve a better text, one in which ideas are not lost in the confusion. Our group suggests that the text should be turned over to a single editor for clarification and refinement. The current material is obviously the work of a committee. Because of that, it lacks beauty, clarity and force.Finally, members felt strongly that even in difficult situations, we need to underline the fact that many Christian families serve as a counter-witness to negative trends in the world by the way they faithfully live the Catholic vision of marriage and the family. These families need to be recognized, honored and encouraged by the document. Thus the first section of the IL text, which is about “observing” the facts, ought to highlight the good as well as the bad and the tragic. Heroic holiness is not a rare ideal and not merely “possible,” but common and lived vigorously in much of the world.
Posted by Barona at 08:50

We know now with certainty who Pope Paul VI and Pope Benedict XVI were referring to when they warned of "the smoke of Satan" and "the wolves" inside the Church.

Thank you for posting the relatio of Circulus Anglicus D (CAD) and for highlighting the section on the Trinity!

It would appear that Archbishop Chaput's focus on the power of grace is beginning to find its rightful prominence in the thinking of at least some of the Synod fathers.

We can only hope more of the Synod delegates come to their senses and speak as forthrightly and faithfully as CAD in defence of the Faith.

Indeed John: they are directly responsible for allowing Satan in. Liberal modernism is Satan undoing the church before our very eyes since the 1960s.