ABORTION, PORNOGRAPHY, grave evils against the family ~ but all we hear from the heretics is Holy Communion for adulterers and homosexuals

For over two weeks these evil men have clamored and strived to destroy the Church, they have worked day and night to defile matrimony and profane the union betwixt Christ and His Church. They have panderer to, excused, strived to water down, confuse the issues over the abomination of homosexuality. Yet during this entire time, a great worldwide holocaust of unparalleled  proportions is taking place: a Third World War against the unborn. Where are they? Why do they not speak up? Indeed, shout from the rooftops! But they are silent. God will judge these evil malefactors who dare to masquerade as priests of Jesus Christ.

Silent they may be on abortion and other grave evils, but inactive they are not. Just as the devil never sleeps, so it would seem that the heretical malefactors who do his dirty work do not rest either. Having felt the powerful blows from Catholic bishops, the dissenting conspirators are now trying to sneak Holy Communion for adulterers (and homosexuals) in through the "back door" - so to speak. The wicked Cardinal Marx is proposing the "Internal Forum Solution".

On October 22nd, following Marx's latest attempt, Thomas Rosica CSB - who has distinguished himself as a propagandist for the heretics - re-tweeted this: 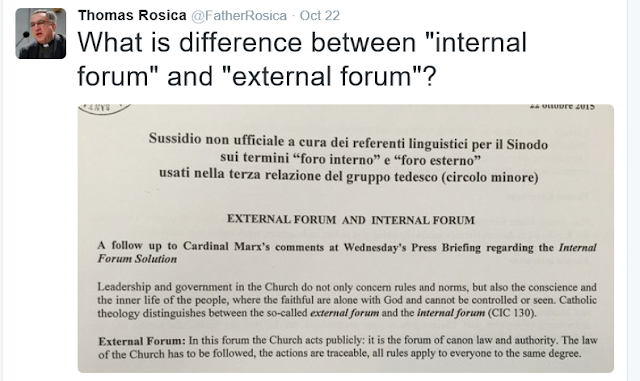 However, St. Pope John Paul II, a priori, refuted the adulterists and homsexualists on all counts:

From Veritatis Splendor, we find another gem, burying the attempts to detach "pastoral" decisions from doctrine. What is intrinsically evil, may never be open to exception:

In their desire to emphasize the "creative" character of conscience, certain authors no longer call its actions "judgments" but "decisions" : only by making these decisions "autonomously" would man be able to attain moral maturity. Some even hold that this process of maturing is inhibited by the excessively categorical position adopted by the Church's Magisterium in many moral questions; for them, the Church's interventions are the cause of unnecessary conflicts of conscience.

In order to justify these positions, some authors have proposed a kind of double status of moral truth. Beyond the doctrinal and abstract level, one would have to acknowledge the priority of a certain more concrete existential consideration. The latter, by taking account of circumstances and the situation, could legitimately be the basis of certain exceptions to the general rule and thus permit one to do in practice and in good conscience what is qualified as intrinsically evil by the moral law. A separation, or even an opposition, is thus established in some cases between the teaching of the precept, which is valid in general, and the norm of the individual conscience, which would in fact make the final decision about what is good and what is evil. On this basis, an attempt is made to legitimize so-called "pastoral" solutions contrary to the teaching of the Magisterium, and to justify a "creative" hermeneutic according to which the moral conscience is in no way obliged, in every case, by a particular negative precept.

No one can fail to realize that these approaches pose a challenge to the very identity of the moral conscience in relation to human freedom and God's law. Only the clarification made earlier with regard to the relationship, based on truth, between freedom and law makes possible a discernment concerning this "creative" understanding of conscience.


However, the Church reaffirms her practice, which is based upon Sacred Scripture, of not admitting to Eucharistic Communion divorced persons who have remarried. They are unable to be admitted thereto from the fact that their state and condition of life objectively contradict that union of love between Christ and the Church which is signified and effected by the Eucharist. Besides this, there is another special pastoral reason: if these people were admitted to the Eucharist, the faithful would be led into error and confusion regarding the Church's teaching about the indissolubility of marriage.
Posted by Barona at 09:47