Cardinal Robert Sarah speaks at the Synod: gender ideology and Islamism are the two greatest threats to the world 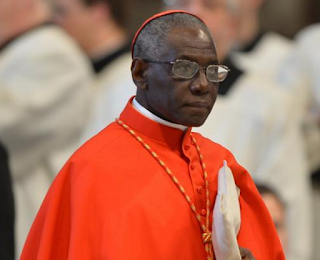 Archbishop Stanislaw Gadecki gave a outline of Robert Cardinal Sarah's intervention on his Polish language blog. Here is my summary of his entry as you will not be hearing or reading about this from the Holy See Press Office.

Firstly, the Archbishop noted that his colleague, Archbishop Henry Hoser was deeply impressed with the theological and intellectual depth of Cardinal Sarah's intervention.

Cardinal Sarah outlined two main, immediate global threats against humanity. A dictatorship of moral relativism that is especially reflected in gender ideology, and Islamic fanaticism, as reflected in the various jihadi movement, especially the islamic State.

The Cardinal compared these two ideologies to the totalitarian expressions of the twentieth century; communism and fascism. Moral relativism, according to the Cardinal, breaks down the family and leads to the loss of true humanity. Contrasting with gender ideology which flows from moral relativism, Islamic fanaticism leads to the terrible abuse of the human person.

From Gender ideology flows euthanasia, abortion, homosexuality; leading to ruthless practices depriving man of his human dignity. "His was not the voice of a prophet of doom, but a voice that flowed from the deep need  of the  awareness that we know how to react to such events", was Archbishop Hoser's comment as recorded by Archbishop Gadecki.
Posted by Barona at 13:25

I look forward to reading Cardinal Sarah's input in the book "Africa -Christ's new homeland". Everything I hear about him is good, very good. He is a faithful servant of Our Lord.

Makes you wonder why/how Cardinal Sarah was appointed to the Congregation for Divine Worship and the Discipline of the Sacraments under this pontificate? And at the same time Cardinal Burke is tossed out of the Curia. I just don't understand Pope Francis.