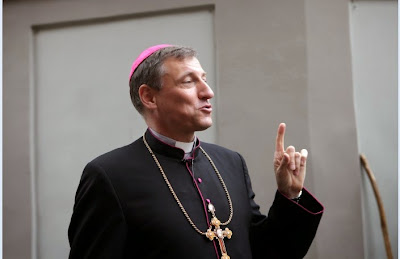 Toronto Catholic Witness provides a complete translation. (You may use freely but you must credit us).

Radio Vatican (RV): Archbishop, up to this moment, what according to you, has been most important at the Synod?

Archbishop Zbigniew Stankiewicz (AZS): It is a fact that the Synod is gradually becoming more focused on what is crucially important. It is about giving families a positive message about the beauty of the vocation of the family, which is written in the plan of God, that it is the way to perfection, the achieving to the Kingdom of God for those who have taken the marriage bond. In my opinion, most of the Synod Fathers are increasingly beginning to realize this. And these secondary issues go by the wayside.

RV: It is said, however, up to now, the debate is dominated by the issue of Communion for the divorced...

AZS: Yes, this has gone through quite a lot of speeches. But it certainly was not the major issue. Thankfully, because the topic kept coming up, in the end it was worked out and became of less importance. I have hope that something good will come of this, because the Church millstone grinds slowly, but throughly. The Synod also turns, turns over this issue. I hope that in the end, untruths and the chaff will be rejected and only pure flour will remain, for this is how through the centuries the Church's tradition worked.

RV: It has been argued that there is strong support for the "way of penance" proposed by the Cardinal Kasper ...

AZS: This proposal is also met with opposition because it could open the door to quite a massive number of divorced receiving Holy Communion. What has become clearer, and  what I myself have proposed in the discussion, is for a slowdown. I mentioned that the Holy Father has opened a breach in the wall of justice with mercy. He did this by accelerating the procedures relating to the annulment of the marriage. Now let us pause for a while and think about it. We should not take any hasty steps which could, unfortunately, cause great harm to the Church and damage families. For if you create such easy access to Holy Communion for the divorced, it hurts those families who are struggling to survive and maintain their fidelity. They may at one point say: why are we struggling, why should we bother, because we can take up with someone else and there will be no problem with this, we will continue to exemplary Catholics. As such, we have to be very careful in making these decisions.

RV: The current debate is the second stage of the Synodal debates. You also participated in the Synod of last year. What is the biggest qualitative change when it comes to the synodal debate?

AZS: I notice that the Synod Fathers are more aware of the problem, also more aware of the dangers, that contain within them two proposals, which resounded in the previous year and were somehow included into the Synod documents. The Synod Fathers have become more critical. I also see this year a greater reaction from the Synod Fathers when I tried to clearly and distinctly speak on the matter. After my last address I was approached by twenty or so people who came up to me and thanked me for being clear and firm on what had to be said.
Posted by Barona at 23:06