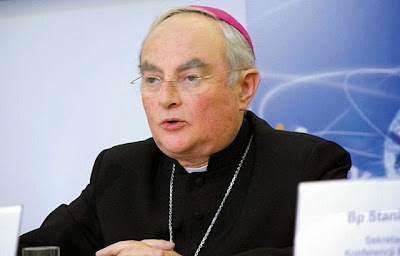 Archbishop Henryk Hoser, one of the three members of the Polish hierarchy to attend the Synod of the Family, was quoted in Niedziela as pointing out that many of the Synod Fathers are actually ignorant of Catholic teaching. The Archbishop, noted that many did not have a grasp of important magisterial teachings, such as the critically important Familiaris Consortio.

"With regret, I must say that the teaching of St. Pope John Paul II on marriage and the family is not familiar to many Synod Fathers. Unfortunately, at this moment it is a blank mark in the Church's consciousness. In the text of the Instrumentum Laboris we find very few references to the teaching of the Pope, recalling to us fundamental  teachings of the Church on marriage, such as documents like the Apostolic Exhortation "Familiaris Consortio" and the "Letter to Families". You cannot fruitfully and effectively direct the Synod on the Family without knowledge of even these two texts"

The Archbishop further criticized a lack of emphasis placed on "Humanae Vitae". This is not the first time that  he has spoken out on this particular issue. Last February he said that Pope John Paul II had been betrayed, and that Church teachings were being contested in all areas.

"We have a lot of terms that are contained in the encyclical "Humanae Vitae " which should appear in the statements of Synod members, but they do not. We have avoidance of the problem of contraception, of which I spoke in the Synod aula. About the scourge of abortion and disrespect for life, not much is spoken. Generally nothing is said of their consequences, not only spiritual and psychological, but biological, that affects the person and consequently the whole of humanity. Nothing is said about the anthropology of Blessed Paul VI and the Church's teaching on the unity of the human person consisting of spirit, soul and body, but these are organic components of every human being made by God the Creator".

(Any use of the above translations must be credited to Toronto Catholic Witness).
Posted by Barona at 08:06

This is not a synod but a gathering of apostate to corrupt the few remaining Catholic priests.

I don't know. I read that it's a 65/35 break down with the heretics in the minority. I'm sure we've faced the same situation in history without the added inconvenience of the internet, everyone blabbing everything, and it being instantly transmitted. You know if no one blabs what's going on, the whole synod could be done in secrecy, and the faithful wouldn't be scandalized in the meantime. That's what Pope Francis is looking for. It's a bloody miracle we didn't get an Arian pope with so many bishops in that camp during the time of St. Augustine. Jesus said He would be with the Church until the end of time. That doesn't mean that everyone will fall in line.

The 35 percent minority ignorant of Pope John Paul II's writings doesn't surprise me. In the U.S., Bishops didn't read them, didn't preach them, and neither did their priests. In fact, when we laypeople tried to read the Catechism of the Catholic Church (a faithful rendering of Vatican II) in our discussion groups in the 1990s, we were told by our pastors that the Catechism was written for the bishops, not us. And it wasn't our job to read it. LOL. We paid no attention luckily because it appeared often that priests and bishops didn't read the catechism, didn't preach the catechism. I have heard so many sermons based on the Protestant magazine Guidepost that if I hear another one, I may throw up! But not one sermon on the Theology of the Body, not one sermon on Humanae Vitae! How could we expect anything else now? I'm glad the ignorant are at the synod. I hope the 65 percent give them a good education. God bless you. Susan Fox www.christsfaithfulwitness.com

If the leaders of the Church can repudiate the legacy of Pius X, and Pius XII, and other pre-Vatican II Popes, then they can, and they will do the same with the teachings of John Paul II.

The coming approval of sin marches on. Get to know your traditional priests so that you will be able to obtain the sacraments.

Very true. Most Catholics are ill-formed, ignorant, and have zero sense of theology since Vatican II. Why would we expect the bishops to be much better?