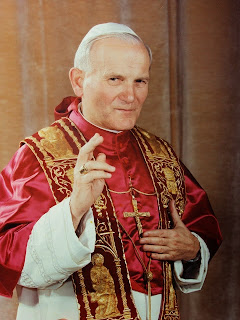 "...freedom is exalted almost to the point of idolatry — lead to a "creative" understanding of moral conscience, which diverges from the teaching of the Church's tradition and her Magisterium".
St. Pope John Paul II

Archbishop Blase Cupich is canonically, a material heretic. Today, in his reply to a question from LifeSiteNews he gave a reply that stands condemned by the Church. Vox Cantoris carries a full report and ask some very, very serious questions about the Archbishop of Chicago. I shall ask my own: just who is this man?


55. ...In their desire to emphasize the "creative" character of conscience, certain authors no longer call its actions "judgments" but "decisions" : only by making these decisions "autonomously" would man be able to attain moral maturity. Some even hold that this process of maturing is inhibited by the excessively categorical position adopted by the Church's Magisterium in many moral questions; for them, the Church's interventions are the cause of unnecessary conflicts of conscience.

56. In order to justify these positions, some authors have proposed a kind of double status of moral truth. Beyond the doctrinal and abstract level, one would have to acknowledge the priority of a certain more concrete existential consideration. The latter, by taking account of circumstances and the situation, could legitimately be the basis of certain exceptions to the general rule and thus permit one to do in practice and in good conscience what is qualified as intrinsically evil by the moral law. A separation, or even an opposition, is thus established in some cases between the teaching of the precept, which is valid in general, and the norm of the individual conscience, which would in fact make the final decision about what is good and what is evil. On this basis, an attempt is made to legitimize so-called "pastoral" solutions contrary to the teaching of the Magisterium, and to justify a "creative" hermeneutic according to which the moral conscience is in no way obliged, in every case, by a particular negative precept.

No one can fail to realize that these approaches pose a challenge to the very identity of the moral conscience in relation to human freedom and God's law. Only the clarification made earlier with regard to the relationship, based on truth, between freedom and law makes possible a discernment concerning this "creative" understanding of conscience.
Posted by Barona at 14:19

Bergoglio is also an apostate and for that reason he doesnt have the power to declare anyone saint.