BREAKING: Cardinal Sarah: "homosexual unions are totally contrary to the plan of God..."

"It would be a rebellion against God. If we accept new unions, how can we continue to call ourselves Christians"?
Robert Cardinal Sarah 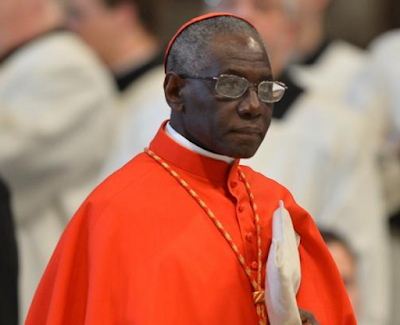 Polonia Christiana carries a very important article of an interview given by His Eminence, Robert Cardinal Sarah a couple of days ago, to the Italian magazine, La Repubblica.

Regarding the issue of homosexual unions, the Cardinal stated:

that it is "not a problem for the Church, but a  human problem. They are a regressive step in terms of culture and civilization. There are no non-western cultures that have a willingness to accept homosexual relationships. In African culture, they are not regarded favourably because they are not open to life. Homosexual unions are totally contrary to the plan of God who created male and female to complement one another.  From these  relationships arise the family which ensures the future of society.

Thanks Barona for translating all these wonderful truths from Poland and Africa, which the other press would ignore or be ignorant of because of the language barrier. God bless you. Susan Fox www.christsfaithfulwitness.com