Homosexualist churchmen or St. John Chrysostom: Who is right on homosexuality? ~ why Church language on sexuality CANNOT change!

Archbishop Blase Cupich and John Cardinal Dew are homosexualists. For all that, Dew's position has received a ringing endorsement from Fr. Thomas Rosica, CSB. But would St. Paul or St. John Chrysostom do the same? This little essay will explain why not.

Let us now travel back in time. Let us have a quick glance at what the Church had to say in 1975, through Persona humana, and then, travel back further to read what the great Patriarch and Father of the Church, St. John Chrysostom had to say about the abominable evil of homosexuality. 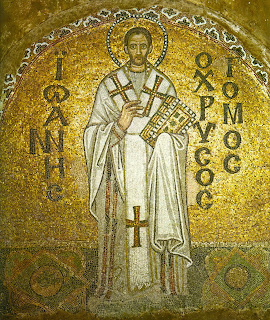 In the present period, the corruption of morals has increased, and one of the most serious indications of this corruption is the unbridled exaltation of sex. Moreover, through the means of social communication and through public entertainment this corruption has reached the point of invading the field of education and of infecting the general mentality...

...there are those who have put forward concepts and modes of behavior which are contrary to the true moral exigencies of the human person. Some members of the latter group have even gone so far as to favor a licentious hedonism.

As a result, in the course of a few years, teachings, moral criteria and modes of living hitherto faithfully preserved have been very much unsettled, even among Christians.

So began the introduction to Persona humana, the document on sexual morality released by the Congregation of the Doctrine of the Faith in the mid 70s. Unfortunately, rather then settle the matter for those who claim to be Christian, this document, as well as the Catechism of the Catholic Church, have been unable to change minds and hearts. One could say that things since 1975 have got considerably worse. What else is one to conclude with priests and lay Catholics promoting (for example) the "homosexual agenda" (that is, whilst officially rejecting "gay marriage" are evasive on other aspects of the "gay subculture"?). If a Catholic claims to oppose "gay marriage", but is silent on the intrinsically evil nature of homosexual acts, what is one to conclude? If a Catholic claims that "gays" "love" each other, and that homosexual relationships cannot be compared to other evils, what are we think? If Catholics march in "gay Pride Parades", thereby giving public affirmation, what are we to deduce? Fr. Dariusz Oko, has termed the new proposals that obfuscate the evil of homosexuality as a "homoheresy" or "gender-ideology". The Polish Bishops Conference has dealt with this in a well reasoned Pastoral Letter dated the 2013 Feast of the Holy Family. The "homoheresy" is a gnostic ideology that claims that "gay is good", that homosexuality is simply another expression of love... In fact, homosexuals are usually deeply psychologically disturbed individuals - many have been sexually abused as children or young boys - many being raised in an all female environment, with absent fathers and strong male figures. Fundamentally, homosexual impulses (for whatever reason - be it psychological illness or demonic influence) are driven by phallic worship. Homosexuality is a sex cult. We can expect increases in homosexuality where the true God is no longer worshiped, where feminism is exalted, where child abuse and sexual license is  advocated.

Persona humana distinguishes between those who have undertaken a homosexual lifestyle as a deliberate moral choice, and those who may be suffering from some sort of psychological pathology. Whatever the case,  "no pastoral method can be employed which would give moral justification to these acts on the grounds that they would be consonant with the condition of such people. For according to the objective moral order, homosexual relations are acts which lack an essential and indispensable finality. In Sacred Scripture they are condemned as a serious depravity and even presented as the sad consequence of rejecting God".

St. John Chrysostom, in his series of Homilies on Romans provides us with a detailed theological exposition on why homosexuality is one of the most evil of sins; why it is and forever remains one of the "four sins that cry to heaven for vengeance". Catholics need to see the world from God's perspective, not theirs. Some may, out of a sense of misguided compassion, wish to downplay Church teaching on the intrinsic evil of homosexual acts; some may wish to dismiss, out of hand, those who adhere to the Church as "fanatics"; others, even clergy, may pander in various ways with the "gay liberation" movement - in all of this a betrayal of Christ and His Church can be seen. We can no more pander to other sins, than to the sin of homosexuality. Certainly, culpability of some may be minimal due to a subjective psychological condition, but objectively each and every homosexual act is intrinsically evil.


In Book Four of his Homilies, the holy Patriarch provides us with a detailed exposition of the verse 1, 26, 27:

They changed the truth of God for a lie. And with regard to the men again, he shows the same thing by saying, Leaving the natural use of the woman. And in a like way with those, these he also puts out of all means of defending themselves by charging them not only that they had the means of gratification, and left that which they had, and went after another, but that having dishonored that which was natural, they ran after that which was contrary to nature. But that which is contrary to nature has in it an irksomeness and displeasingness, so that they could not fairly allege even pleasure. For genuine pleasure is that which is according to nature. But when God has left one, then all things are turned upside down. And thus not only was their doctrine Satanical, but their life too was diabolical.
And reflect too how significantly he uses his words. For he does not say that they were enamoured of, and lusted after one another, but, they burned in their lust one toward another...

And what is there more detestable than a man who has pandered himself, or what more execrable? Oh, what madness! Oh, what distraction! Whence came this lust lewdly revelling and making man's nature all that enemies could?
Posted by Barona at 20:59

Wonder what Father would say about his fellow citizens at the link. Incredible.

This is excellent! Thank you for such clarity. May God bless you this day and always.