In recent days, owing to good circumstances, I have had the following passage in my mind:

Be like little children. Trust, hope, and have faith in God, His Church, His Saints, and His Lovely Sacraments. He loves us more than we know - indeed, as a father loves His children. He kisses each and every one of us on the forehead daily with Love and Compassion. He wants us to be with Him, and He eagerly waits each day for our yes to Him.  He does not need it, but wants it nonetheless because He loves us just for the sake of Loving us.

A child loves her parents because they are her parents. So it is to be in our relationship with God and All That He Is. He is Our Father and wants nothing nothing else but to be Our Father.

Let us welcome such children by first welcoming ourselves as such children. It is not an easy thing to do. But it is so worth it.

God love you all. 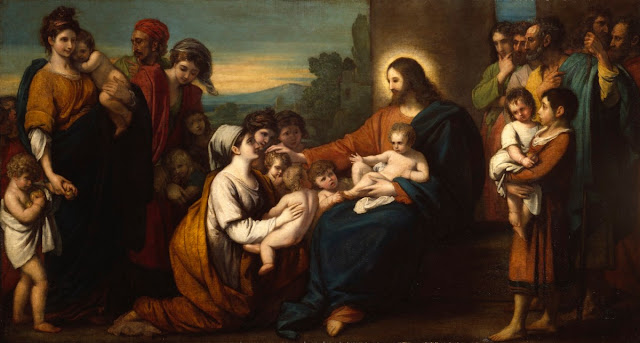 Posted by Irenaeus at 12:11 No comments:

Banks and Military Industrial Complex PROFIT from the Ukraine-Russia War

The US, EU, and their "allies" (Canada, Australia) have ensured that the war over the Donbas will make handsome profits for their masters, the international banksters. And indeed massive profits are being made; by banks and the ever present military industrial complex. The involvement of BIG globalist money also explains the MSM dutifully spewing out the war-mongering agitprop. This is a war about Russia, not about "democracy", "human rights", etc. Otherwise, for example, the US would not have reduced Raqqa to rubble through carpet bombing, resulting in thousands of civilian deaths. Or the 78 days of non-stop bombing of Belgrade by the imperial forces of the globalists, NATO.

Perhaps the saddest thing in all this is that the churchmen are silent. Or, if not silent, dutifully joining their paymasters (Caesar) and pushing the propaganda.

Contrary to the lies spread by the war mongers, the people of the Donbas have suffered horribly over the last 8 years. You never hear about them. But you will if you watch this...

Litany of the Saints

Posted by Irenaeus at 20:18 No comments:

Jesus and the Soul 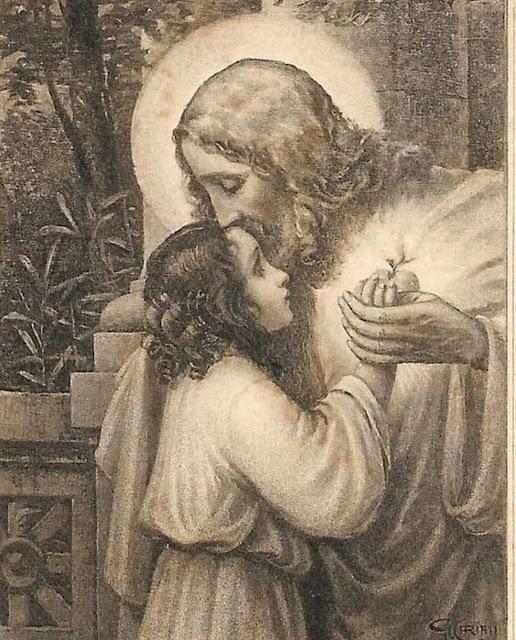 Posted by Irenaeus at 18:10 No comments:

Isn't God so wonderful? O happy fault, that merited so great a Redeemer!

(Alleluia.)
1
Give praise to the Lord in heaven; praise him, all that dwells on high.
2
Praise him, all you angels of his, praise him, all his armies.
3
Praise him, sun and moon; praise him, every star that shines.
4
Praise him, you highest heavens, you waters beyond the heavens.
5
Let all these praise the Lord; it was his command that created them.
6
He has set them there unageing for ever, given them a law which cannot be altered.
7
Give praise to the Lord on earth, monsters of the sea and all its depths;
8
fire and hail, snow and mist, and the storm-wind that executes his decree;
9
all you mountains and hills, all you fruit trees and cedars;
10
all you wild beasts and cattle, creeping things and birds that fly in air;
11
all you kings and peoples of the world, all you that are princes and judges on earth;
12
young men and maids, old men and boys together; let them all give praise to the Lord’s name.
13
His name is exalted as no other,
14
his praise reaches beyond heaven and earth; and now he has given fresh strength to his people. Shall not his faithful servants praise him, the sons of Israel, the people that draw near to him? Alleluia.
Posted by Irenaeus at 16:15 No comments:

Hearts of the Holy Family 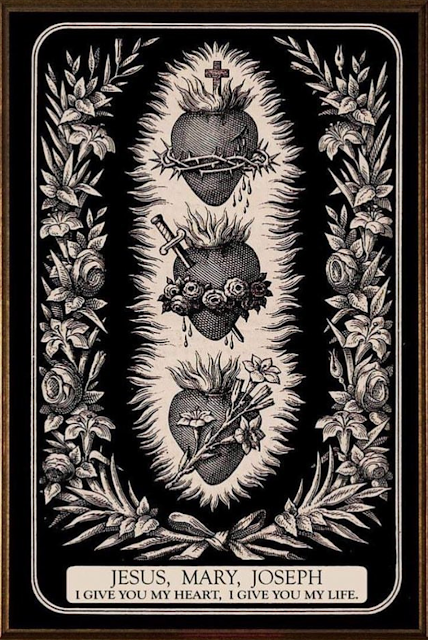 Posted by Irenaeus at 13:15 No comments: 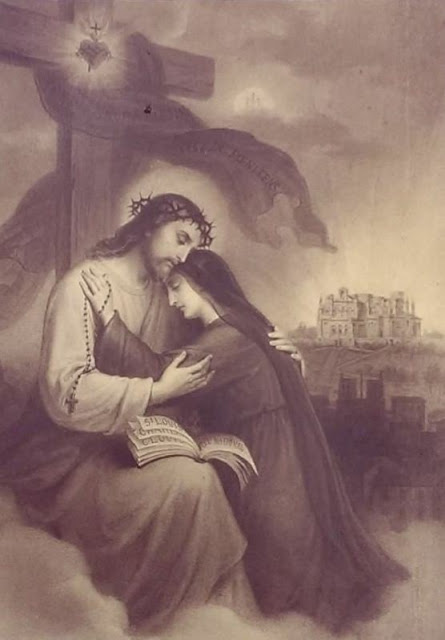 Posted by Irenaeus at 11:02 No comments:

Email ThisBlogThis!Share to TwitterShare to FacebookShare to Pinterest
Labels: Art and Culture, Easter

Email ThisBlogThis!Share to TwitterShare to FacebookShare to Pinterest
Labels: Art and Culture, Easter

A Most Blessed Eastertide to all of our readers!

The most Solemn of Solemnities - Easter - has come and gone, but the celebration continues! Today is Easter Monday, only the second day in a week-long celebration of the Resurrection, the triumph over death and sin by Our Lord Jesus Christ (may His Name be Blessed forever and ever)!
It is amazing to consider how much this event - and the preceding Passion - was anticipated by the prophets of the Old Testament and the good Jewish people as a whole. Indeed, since Scripture is one long love letter from God to us, the Passion and the Resurrection is God's signature at the end. Oh, what a flourish that signature has! Oh, what love He has for us!
With that in mind, Toronto Catholic Witness wishes all of its readers a Most Blessed Eastertide. 2022 may be challenging thus far, but God's love remains unchanging - even and especially when we are beset by numerous difficulties. He loves us more than we can comprehend.
Happy Easter - and may the Glory of the Resurrection never cease to lose its wonder in your eyes.
Christ has risen! Indeed, He has risen! Alleluia, alleluia! 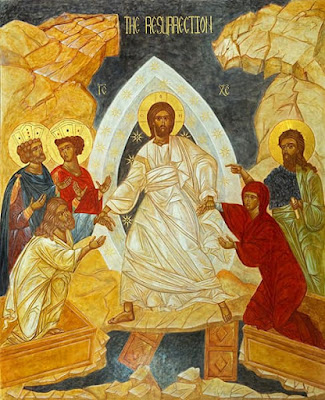 Posted by Irenaeus at 13:52 No comments:

Email ThisBlogThis!Share to TwitterShare to FacebookShare to Pinterest
Labels: Easter

LIVE: Mass of the Presanctified 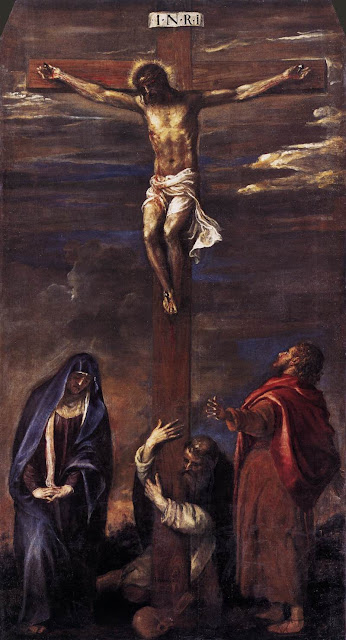 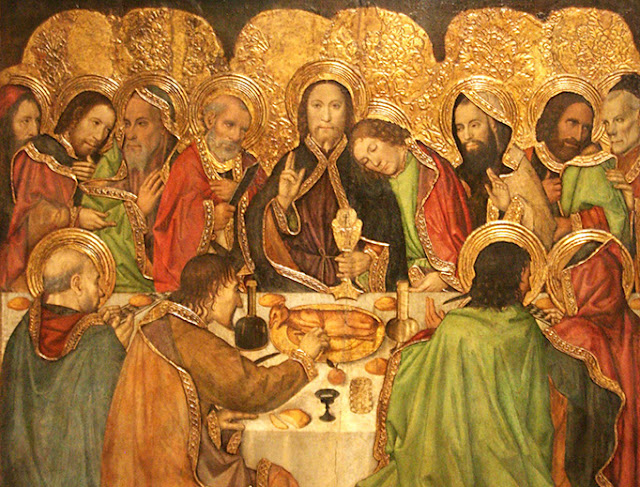 EPISTLE: 1 Corinthians 11:20-32
Lesson from the Epistle of Blessed Paul the Apostle to the Corinthians. When you come therefore together into one place, it is not now to eat the Lord’s supper.
For every one taketh before his own supper to eat. And one indeed is hungry and another is drunk.
What, have you not houses to eat and to drink in? Or despise ye the church of God; and put them to shame that have not? What shall I say to you? Do I praise you? In this I praise you not.
For I have received of the Lord that which also I delivered unto you, that the Lord Jesus, the same night in which he was betrayed, took bread,
And giving thanks, broke, and said: Take ye, and eat: this is my body, which shall be delivered for you: this do for the commemoration of me.
In like manner also the chalice, after he had supped, saying: This chalice is the new testament in my blood: this do ye, as often as you shall drink, for the commemoration of me.
For as often as you shall eat this bread, and drink the chalice, you shall shew the death of the Lord, until he come.
Therefore whosoever shall eat this bread, or drink the chalice of the Lord unworthily, shall be guilty of the body and of the blood of the Lord.
But let a man prove himself: and so let him eat of that bread, and drink of the chalice.
For he that eateth and drinketh unworthily, eateth and drinketh judgment to himself, not discerning the body of the Lord.
Therefore are there many infirm and weak among you, and many sleep.
But if we would judge ourselves, we should not be judged.
But whilst we are judged, we are chastised by the Lord, that we be not condemned with this world.
GOSPEL: John 13:1-15
Before the festival day of the pasch, Jesus knowing that his hour was come, that he should pass out of this world to the Father: having loved his own who were in the world, he loved them unto the end.
And when supper was done, (the devil having now put into the heart of Judas Iscariot, the son of Simon, to betray him,)
Knowing that the Father had given him all things into his hands, and that he came from God, and goeth to God;
He riseth from supper, and layeth aside his garments, and having taken a towel, girded himself.
After that, he putteth water into a basin, and began to wash the feet of the disciples, and to wipe them with the towel wherewith he was girded.
He cometh therefore to Simon Peter. And Peter saith to him: Lord, dost thou wash my feet
Jesus answered, and said to him: What I do thou knowest not now; but thou shalt know hereafter.
Peter saith to him: Thou shalt never wash my feet. Jesus answered him: If I wash thee not, thou shalt have no part with me.
Simon Peter saith to him: Lord, not only my feet, but also my hands and my head.
Jesus saith to him: He that is washed, needeth not but to wash his feet, but is clean wholly. And you are clean, but not all.
For he knew who he was that would betray him; therefore he said: You are not all clean.
Then after he had washed their feet, and taken his garments, being set down again, he said to them: Know you what I have done to you?
You call me Master, and Lord; and you say well, for so I am.
f then I being your Lord and Master, have washed your feet; you also ought to wash one another’s feet.
For I have given you an example, that as I have done to you, so you do also.
CREDO.
Posted by Irenaeus at 15:11 No comments: 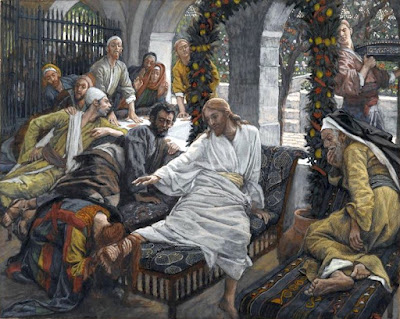 EPISTLE (Is. 50:5-10)
The Lord God hath opened my ear, and I do not resist: I have not gone back.
I have given my body to the strikers, and my cheeks to them that plucked them: I have not turned away my face from them that rebuked me, and spit upon me.
The Lord God is my helper, therefore am I not confounded: therefore have I set my face as a most hard rock, and I know that I shall not be confounded.
He is near that justifieth me, who will contend with me? let us stand together, who is my adversary? let him come near to me.
Behold the Lord God is my helper: who is he that shall condemn me? Lo, they shall all be destroyed as a garment, the moth shall eat them up.
Who is there among you that feareth the Lord, that heareth the voice of his servant, that hath walked in darkness, and hath no light? let him hope in the name of the Lord, and lean upon his God.
GOSPEL (John 12:1-9)
Jesus therefore, six days before the Pasch, came to Bethania, where Lazarus had been dead, whom Jesus raised to life.
And they made him a supper there: and Martha served: but Lazarus was one of them that were at table with him.
Mary therefore took a pound of ointment of right spikenard, of great price, and anointed the feet of Jesus, and wiped his feet with her hair; and the house was filled with the odour of the ointment.
Then one of his disciples, Judas Iscariot, he that was about to betray him, said:
Why was not this ointment sold for three hundred pence, and given to the poor?
Now he said this, not because he cared for the poor; but because he was a thief, and having the purse, carried the things that were put therein.
Jesus therefore said: Let her alone, that she may keep it against the day of my burial.
For the poor you have always with you; but me you have not always.
A great multitude therefore of the Jews knew that he was there; and they came, not for Jesus’ sake only, but that they might see Lazarus, whom he had raised from the dead.
Posted by Irenaeus at 07:30 No comments: 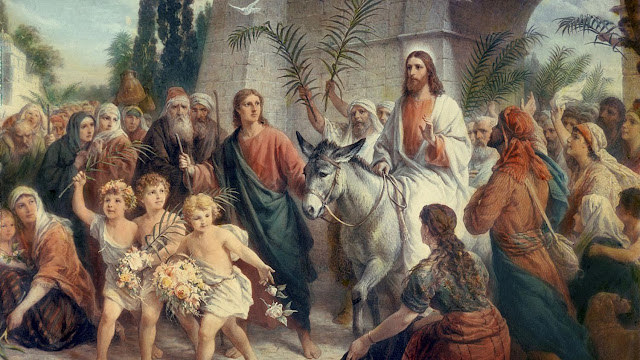