BREAKING: Synod Fathers demand a definition of the family to oppose homosexual propaganda; contraception and abortion labelled a "terror" 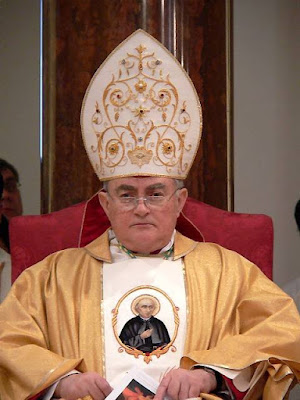 During discussions in the small groups on Part Two of the Instrumentum Laboris, amongst proposals put forward from Synod Fathers, was the need to emphasize a true and correct definition of the family. Archbishop Henryk Hoser of Warszawa-Praga spoke with Vatican Radio [Polish language section] on the concerns that Fathers have about the need for a proper definition.

"They demanded to recall what the definition of the family is, because of the fact that there exists so-called derived, surrogate and broken families. Today you can count a whole list of families, including also  homosexual ones. The idea is to return to the foundational definition of the family, the one we believe in, and the one in which this is realized"

Archbishop Hoser also spoke of the cloud of "terror" that evil western powers are trying to impose on Africa: neo-colonial imperialism promoting death through contraception and abortion, and sexual perversion. Non-Europeans are very concerned that many issues are being seen and promoted through a local European prism.

"The African bishops are concerned about the terror of the  imposition of contraception, abortion and various foreign ideologies. They say it works like a mill; to flatten society with such action, which is imposed with force, especially through economic power. It follows that subsidies for other development projects are subject to the adoption of this "bioethical dictatorship", so to speak, touching on the biology of marriage. The Synod is now entering a very interesting phase because following all these activities we are increasingly coming to certain conclusions".

(translation by Toronto Catholic Witness. You may use freely, but you must credit us)
Posted by Barona at 13:40

It's tragic that Western countries impose immoral conditions on their aid to African nations. Whether we like it or not, this makes economic policies in Africa more important than ever, so that they can reduce their dependency on the dirty money coming from the Western "bioethical dictatorship".