BREAKING: Archbishop Stanisław Gądecki denounces feminism and gender ideology at the Synod of the Family 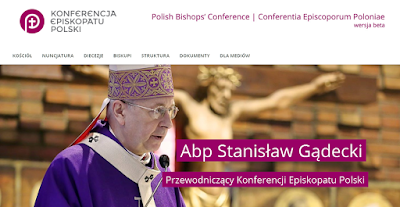 Archbishop Stanisław Gądecki, on October 7, 2015,[Polish source] spoke to a Group of fathers ("circules minores" - Italian Group "B") on gender ideology, feminism  as destructive of the family and married life. The Archbishop began his talk by discussing the Instrumentum Laboris, when referring to the problems of the family. The Archbishop felt that dwelling on "difficulty" creates a sociological danger of removing from the family its most important aspect, its ecclesial side, the fact that the most important part of a family is the Faith, and this positive aspect must be emphasized. In his talk he also addressed economic problems, which he noted, can be highly detrimental to family life, especially in developing nations.  Here, I will concentrate on the remarks he made on feminism and gender ideology.

On the issue of feminism, the Archbishop noted the difficulties that can arise when marriage and the family are viewed from a particular cultural perspective; such as, the perspective of feminism, which is replete with arguments that marriage is a form of oppression, that motherhood is forced on women and that raising of children undermines a woman's ability to realize her ambitions.


Archbishop Gądecki then turned to genderism and gender ideology. He noted that there is a difference  of perspective of what "gender" is in various parts of the world. Culturally, it is perceived differently, as in Asia, Africa or Latin America. The threat does not come from gender, which is, he noted, founded on the biological sciences that one is either a man or a woman. The danger comes from gender ideology which seeks to abolish the differences between male and female. Archbishop Gądecki contended gender ideology is aimed at the young, at children, and in most cases even without parental consent. Children are being habituated to accepting this change in the concept of sexuality. The sexualization of children through gender ideology makes children treat sex in isolation from sexuality. Sexual matters are no longer taught by adults but by peers. The Archbishop also pointed out gender ideology is being more and more promoted through government legislation and educational programs in schools.

The solution is proper Catechetical instruction to keep the family Christian


During these difficult times, the Church must proclaim that "male and female, He created them". This is natural marriage, and is universal, applying to all of humanity. It is contained in the old and New Testaments and is permanent and unchangeable. The Archbishop also pointed out that he believes that local churches are aware of the problem of gender ideology. This emerged in the Netherlands, for example, in the presentation on marriage by the  Neocatechumenal Way, where the gender ideology had dominated social life for years. School children  had been initiated into sex without any moral reference etc.

Archbishop Gądecki could not help but notice a paradox: western countries oppose forced marriages, (especially as practiced by Islam), yet they support the contraceptive industry as a solution. The antidote, again, is what some are doing in the Netherlands: a regular dialogue with children helping them with their concerns and problems with Sunday catechesis. "One cannot wash one's hands and say that it is a school matter. The Christian family identity will be maintained by parents who speak honestly and openly with their children", stated the Archbishop.

In addition to his words at the Synod, Archbishop Gądecki has not been idle in speaking to the media about the danger of gender ideology, which he has identified as more dangerous than Marxism. Polish speakers may wish to listen to the Archbishop on Radio Warszawa. Toronto Catholic Witness provides a translation of the two brief clips on the link.

"It is an ideology that seeks to destroy marriage and the family, precisely through the blurring of various influences. Gender ideology draws from various sources to obscure the truth; in the first place to cause confusion through its activities with children".

"Through a dialogue within the family, that means on each Sunday, there is a gathering with children, and a discussion about the whole week, what happened, what was going on at school, what difficulties; for instance, doubts at school. Without time set aside to talk with children the situation cannot be rescued".
Posted by Barona at 16:01

Email ThisBlogThis!Share to TwitterShare to FacebookShare to Pinterest
Labels: Catholic Family Crisis, Crisis in the Church, Protect the Children, The Persecuted Church

Thank you so much for getting the message out about the synod!

Yes, that is my reaction too. Thank you Barona for getting the message of the Synod out. So many people are worried. God bless you. Susan Fox www.christsfaithfulwitness.com