When will the Vatican Homo-Lobby dig up St. John Paul II's body and throw it into the Tiber? 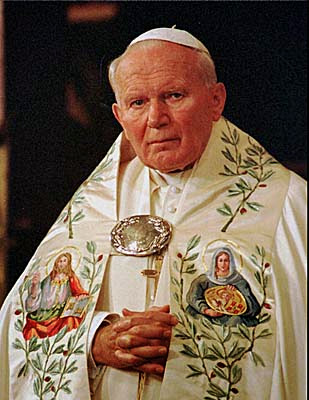 St. John Paul II, the "Forgotten", gave a talk before the Roman Rota in 1999 on the sacredness of marriage. Turning to the issue of homosexuality the holy Pope proclaimed:

In the light of the above-mentioned principles we can also see how incongruous is the demand to accord “marital” status to unions between persons of the same sex. It is opposed, first of all, by the objective impossibility of making the partnership fruitful through the transmission of life according to the plan inscribed by God in the very structure of the human being. Another obstacle is the absence of the conditions for that interpersonal complementarity between male and female willed by the Creator at both the physical-biological and the eminently psychological levels. It is only in the union of two sexually different persons that the individual can achieve perfection in a synthesis of unity and mutual psychophysical completion. From this perspective, love is not an end in itself and cannot be reduced to the corporal joining of two beings, but is a deep interpersonal relationship which reaches its culmination in total mutual self-giving and in cooperation with God the Creator, the ultimate source of every new human life.

As you know, these deviations from the natural law inscribed by God in the nature of the person seek their justification in the freedom that is a prerogative of the human being. This justification, in fact, is self-serving. Every believer knows that freedom, as Dante said, is “the greatest gift that God in his bounty made in creation, the most conformed to his goodness” (Par. 5:19-21), but it is a gift that must be correctly understood if it is not to become a stumbling-block for human dignity. To conceive of freedom as the moral or even juridical licence to break the law is to distort its true nature. Freedom consists in the human being’s possibility of conforming responsibly, that is by personal choice, to the divine will expressed in the law, and in this way to become more and more like his Creator (cf. Gn 1:26).

...Unfortunately, the daily news amply confirms the miserable fruits that these aberrations from the divine-natural law ultimately produce. It seems as if the situation which the Apostle Paul describes in the Letter to the Romans is being repeated in our day:  “Since they did not see fit to acknowledge God, God gave them up to a base mind and to improper conduct” (Rom 1:28).


Little would we realize that in 2015 "the miserable fruits" would also be coming from the homo-lobby in the Vatican, as the Holy See Press Office stridently and maliciously pillories and crucifies Kim Davis.

The full text may be read here.
Posted by Barona at 14:25

Wow never thought I would see the day when Pope John Paul II would be considered overly conservative on doctrine.

John Paul's body will be thrown into the Tiber one day alright. But it'll be by a future cleanup crew tasked with ridding the Church of the garbage he aided, abetted and covered up for. Lots of skeletons.