BREAKING: Linda Gibbons to be put on trial, January 13, 2016 for witnessing outside an abortion facility in Toronto, Canada 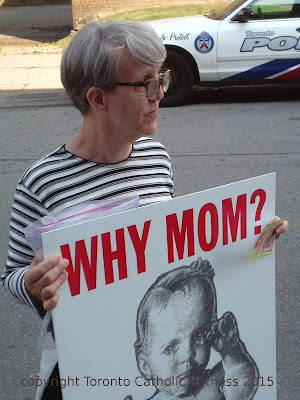 "We are the people of life because God, in his unconditional love, has given us the Gospel of life and by this same Gospel we have been transformed and saved"
St. Pope John Paul II, (Evangelium Vitae, 79)

Shortly after 12:30 a.m., Linda Gibbons was informed that the Crown will proceed with a trial to be held on January 13th, 2016. Linda was arrested for peacefully, lovingly, silently walking to and fro outside the east-end Morgentaler Hillsdale abortuary in Toronto, Canada on September 2nd, and has been in prison (Linda refuses bail), held in maximum security ever since. 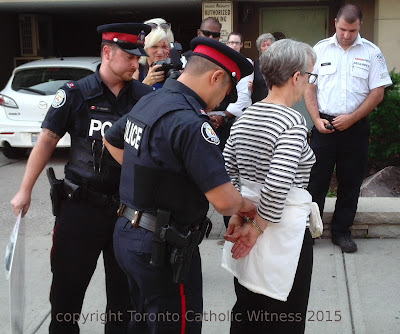 Testifying to the truth of the evil of abortion, Linda carried her sign that bore the words: "Why Mom, when I have so much love to give"? On that September 2nd, Linda having arrived at nine a.m., was taken into custody just before 11 a.m., for "violating" a bubble zone injunction. 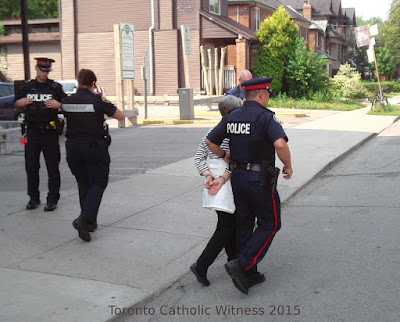 Always silent in Court - in solidarity with the silent unborn infants so brutally murdered - Linda entered the courtroom clad in the green attire of an inmate at the Vanier Centre for Women - at 11:35 a.m. All her supporters - nine of us - arose while her handcuffs were removed and Linda seated herself. We then all sat. The Crown proceeded with the claim that they needed "further time to review the evidence". The Court was informed that the Crown had discussed with Mr. Dan Santoro (Linda' lawyer) the need for a six hour allotment if the case went to trial, as it seemed that Crown Prosecutor Daniel Brandes desired. The proceeding was then held over  until 12:15 p.m.

At 12:25, Linda re-entered the Court. Representing the Santoro law firm was Jan Belton. Crown Prosecutor, Daniel Brandes, stated that further disclosures would be provided from evidence from one of the security guards at the abortuary, as well as colour photos. The charges are officially: "obstructing a peace officer and disobeying a court order". A very brief discussion ensued for the date of trial. The Justice of the Peace set the date for trial on Janaury 13th, 2016, in Courtroom 509, at the College Park Courts in downtown Toronto. 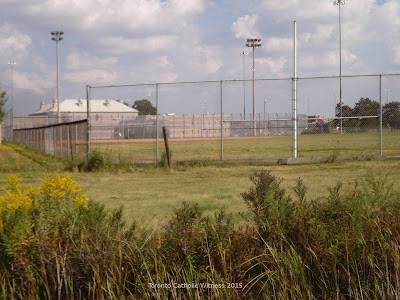 Dear friends. This is outrageous. Linda is innocent, as any law in favour of murder is no law at all. Pope John Paul II in Evangelium Vitae wrote:

Abortion and euthanasia are thus crimes which no human law can claim to legitimize. There is no obligation in conscience to obey such laws; instead there is a grave and clear obligation to oppose them by conscientious objection. From the very beginnings of the Church, the apostolic preaching reminded Christians of their duty to obey legitimately constituted public authorities (cf. Rom 13:1-7; 1 Pet 2:13-14), but at the same time it firmly warned that "we must obey God rather than men" (Acts 5:29).