"The Gestapo, KGB or Ministry of Public Security? No, it's the Canadian police arresting a non-violent, pro-life woman" 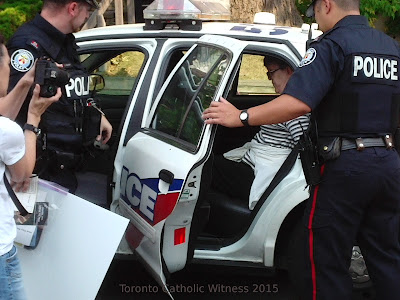 A good friend of this blog, Nick Donnelly, succinctly encapsulated one very sinister aspect of the moral crisis that has seized Canada. The Hegelian "god-State". Sadly most Canadians adhere to some form of fascist conception of the State, perhaps not in theory, but in practice, accepting the State to be supreme over the human person. From this flows that opposition to the State cannot be tolerated. It is Linda Gibbon's opposition, her public witness for the culture of Life (against the the State's culture of death, that permits the mass murder of unborn children), that causes the State to de facto move against her in the manner of the Gestapo or the KGB.

Readers should know that Linda was arrested outside a Toronto abortion facility this past September 2nd for holding a sign that read:"Why mom, when I have so much love to give".  Her trial has been set for January 13, 2016.

"...what is happening also at the level of politics and government... is the sinister result of a relativism which reigns unopposed...in this way democracy, contradicting its own principles, effectively moves towards a form of totalitarianism. The State is no longer the "common home" where all can live together on the basis of principles of fundamental equality, but is transformed into a tyrant State...when this happens, the process leading to the breakdown of a genuinely human co-existence and the disintegration of the State itself has already begun".


Please pray for Linda Gibbons, dwelling in prison for love of the unborn babies. For the love of Life and Truth.
Posted by Barona at 12:56

I get frustrated by cases such as Linda Gibbons and Mary Wagner. None of the lawyers in their cases have noticed that international criminal law establishes abortion as a crime against humanity by a precedent laid down in the case of United States v Greifelt and others [1948].

As an American, I am appalled at what is becoming of Canada. Canadians are allowing their liberty to be removed by the government. What they fail to realize is that the government that is in place today, can be gone tomorrow. When the political pendulum swings back, in the wake of failures, as it usually does, will Canadians be so happy to find themselves controlled by the people in power?
This arrest of a peaceful pro-life person means one thing for me personally. I will never cross that border and visit Canada, as long as this is the situation, for the same reason I will not visit Mexico really, that I can not be certain of finding a basic level of fundamental decency in that country. In short, I do not any longer trust Canada.
The men who arrested this woman should be completely ashamed of themselves. There is a time for disobedience. Canadians should be ashamed of themselves to tolerate this. You do not defend life?
God may not defend you.