Descent into Darkness: How the spirit of Freemasonry rules on Vatican Hill through ecumenical religious indifferentism

Vatican Radio has published again on the Paris Terror Attacks. Ever vigilant, the arch-modernists who control Vatican Radio, have ensured that the Holy Name of Our Lord Jesus Christ is not mentioned. 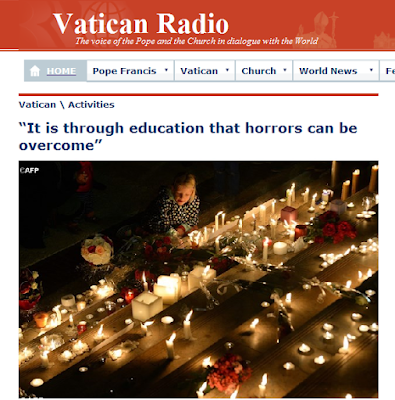 In the spirit of an insane ecumenical religious indifferentism (derived from the poisonous wellspring of Freemasonry) Vatican radio has again spoken out: the solution to the Islamic terror, the Islamic invasions is:"education". But not in Our Lord Jesus Christ, not in His beautiful doctrine, not in proclaiming Jesus Christ the only name under Heaven by which we are saved, not in striving to draw the Moslem way from his errors, from the false and pernicious heresies and evil doctrines taught by Mohommed, a man rightly seen by the Church as a precursor of the Antichrist, "a monster of cruelty, lust and rapacity".

Rather, it is "education" in a spirit of ecumenical fantasy, of delusion, of indifferentism. Leave the poor Mohommedan in his error. It doesn't matter. Jesus Christ is God for the Christian, not God for the Mohommedan. But, it doesn't matter. Two and two is four for you, five for me, and so on. It doesn't matter. As long as we feel good, are nice to each other, each to his own truth, it doesn't matter. All that is essential is that we have gooey feelings in our hearts. Madness. Absolute madness. These churchmen who preach this (and implicitly they do, though they would deny it) are mad and leading millions of Catholics into perdition.

It should be noted what Vatican Radio's motto is: "the voice of the Pope and the Church in dialogue with the world". There you have it! Dialogue. Our Lord did not dialogue, nor did the Apostles. We have seen where this "dialogue" has taken the Church and most Catholics, when engaging "the world". It has led, as we saw at the Synod, to dialogue with "the flesh and the devil". A logical step when flirting with the world.

Bergoglio is opposing the Catholic Church he is declaring a war and preaches a secular humanism through the heresy of religious indifference.

Then an accusation: teachers are badly paid.
http://rorate-caeli.blogspot.ie/2015/11/pope-francis-orders-no-conversions-in.html?m=1
Humanist indifferentism: https://www.youtube.com/watch?v=SXEblpc3beM
2013 when Francis visited Rio de Janeiro, Brazil, for World Youth Day. In it, he declares that it is not important to him whether someone lacking food and education receives a Catholic, Protestant, Orthodox, or Jewish education, as long as he is fed and gets educated.

We urge the true followers of JESUS CHRIST to stand united in protecting and standing for his TRUE TEACHINGS because Vatican II and Francis Bergoglio are all about MONEY, POWER, GREED, FAME and CONTROL all because of Freemasonry!!! Be vigilant to Priests, Cardinals who are clothed with the sheep's clothing but works with the Evil, these servants are after materialistic wealth so stand guard and do not listen to them!!! Find a TRUE SERVANT of GOD!!!