Vatican Radio: ecumenical confusion and the evil, malignant force that has penetrated the Vatican

Those who have actually read the acts of the Second Vatican Council are aware that the Church, though wishing to seek out the separated brethren, warned against a false irenicism, a false ecumenism. Sadly, we are far, far away from 1965. Recently a message was sent to the Hindus , wishing them a "joyous Deepawali". This is madness: this is religious indifferentism. This is blasphemy.

We also have a Catholic bishop posing with women in drag, published on Vatican Radio's website (screenshot below). What poor St. John XXIII would say about the horrible perversion of his Council by misleading and heretical bishops? But, it gets deeper: how is this irenicism allowed on Vatican Radio? Who is in control? We have had incidents of open promotion of homosexuality, of interviews with "Catholics" who promote abortion, contraception etc. To even the casual observer it must be obvious: there is some evil, malignant force at work at Vatican Radio.

The following is a Catholic bishop posing with a lay woman. This poor, deluded woman - as readers will notice - is dressed as a man and believes herself to be a "bishopess". Far worse: she is dressed in male clerical attire. Yet infinitely worse than all that: Catholics are deceiving the separated brethren, leaving them in their errors. This is the greatest sin of all! 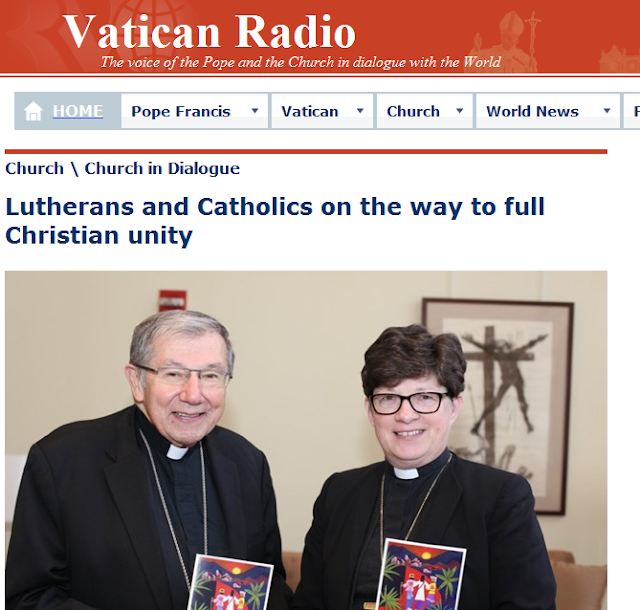 You write about the smoke of hell.
When is the wind of the Holy Spirit going to blow through and clean up the Church? Actually, God told my husband a few days ago. He said when we establish Catholic families. My, that's why the Synod was assembled. There is hope. A lot of cardinals came out of the Synod on fire to save our marriages. Even German Cardinal Reinhold Marx said at the end of the Synod that the bishops would not tolerate gender as a social construct. And boo to same-sex "marriage." God bless you. Susan Fox www.christsfaithfulwitness.com