"They that have forsaken the Lord, shall be consumed"
Isaiah, 1, 28 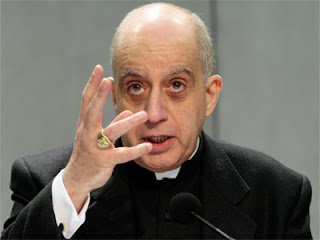 The President of Pontifical Council for the New Evangelization, Archbishop Rino Fisichella, has opined on the Paris Terror Attacks; without mentioning the Prince of Peace, Our Lord Jesus Christ, of whom Sacred Scripture states clearly: "without me you can do nothing" (John XV, 5).  So far the Pope, the Secretary of State and Fr. Lombardi have spoken about the Paris Terror Attacks; not one of them mentioning Our Lord Jesus Christ.

Fisichella, instead of a somber warning that war is a punishment for sin, declares this misleading falsehood, this lie: "...the three monotheistic religions and all three agree about a merciful God...." As has been pointed out over millennia by saints, and the Church herself: Islam is a false religion, her "prophet" a precursor of the Antichrist (c.f. "L'Antechrist" Ch.2. pt iii, by the great Jewish convert, the Abbe Augustin Lemann).

Having elevated the diabolical religion of the murderous Mohommed to a "monotheistic religion" with a "merciful God", the Archbishop then offers a de facto Masonic solution: "...it is the failure of politics and diplomacy...I hope for stronger action at the UN and all the institutional realities that take charge of international peace..."

According to this malefactor, the solution to terror, to evil, lies not with a return to true religion of the apostate Christians, or the conversion of Mohommedans and Jews and other men who do not know the sweet yoke of Christ; but rather, according to this man, to follow the masonic UN to expand and consolidate "international peace". Is he working for Jesus Christ, or the coming of the False Prophet and the Antichrist? This is not rhetoric: evil will abound and hearts will grow cold before the Man of Perdition will be revealed.

Contrast the non-solution, indeed evil solution offered by Fisichella with that offered by Pope Pius XI in the wake of the Great War. The holy Pope wrote: 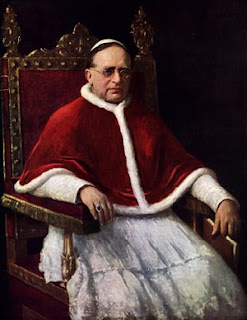 Because men have forsaken God and Jesus Christ, they have sunk to the depths of evil. They waste their energies and consume their time and efforts in vain sterile attempts to find a remedy for these ills, but without even being successful in saving what little remains from the existing ruin. It was a quite general desire that both our laws and our governments should exist without recognizing God or Jesus Christ, on the theory that all authority comes from men, not from God.

... Society, quite logically and inevitably, was shaken to its very depths and even threatened with destruction, since there was left to it no longer a stable foundation, everything having been reduced to a series of conflicts, to the domination of the majority, or to the supremacy of special interests.
Posted by Barona at 11:32

Wow, what a total abdication of leadership. At this rate the Islamic jihad will conquer Rome and the West, not in 100 years, but perhaps in 50.

Intellectually speaking, the jihad has already conquered the Vatican. JPII was one of the first victims.