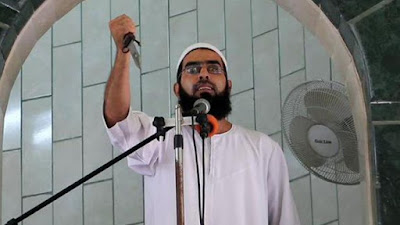 A false ecumenical fantasy. Here we have the real reasons for the foolishness, the idiocy coming from Rome and various functionaries following the monstrous terrorist attack on Paris last Friday. One minor functionary even mused that the Islamic battle cry, "Allahu Akbar" was never a call to "violence and destruction". This buffoonery is all about a delusional "ecumenical dialogue" with the followers of a false religion, whose founder was a pedophile, and a "monster of lust, cruelty, and rapacity" (Archbishop Sheehan).

Syriac Catholic Patriarch Ignatius Ephrem Joseph III Younan is not the only one. “Why, we ask the western world, why not raise one’s voice over so much ferocity and injustice?” asked Cardinal Angelo Bagnasco, the head of the Italian Bishops Conference (CEI). The Melkite Greek Catholic Patriarch Gregory III has also said: “I do not understand why the world does not raise its voice against such acts of brutality.”

Here is why: “Talk about extreme, militant Islamists and the atrocities that they have perpetrated globally might undercut the positive achievements that we Catholics have attained in our inter-religious dialogue with devout Muslims.” — Robert McManus, Roman Catholic Bishop of Worcester, Massachusetts, February 8, 2013

That’s right, it’s all for the sake of the spurious and self-defeating “dialogue.” Bagnasco should ask his colleagues in the U.S. Conference of Catholic Bishops. He should ask bishops like McManus, Kevin Farrell, Jaime Soto and others why they move actively to silence and demonize voices that tell the truth about this persecution. He should ask them why the U.S. Catholic bishops tolerated dissent from so many core Catholic dogmas for decades, but move as ruthlessly as any Grand Inquisitor to suppress dissent from the idea that Islam is a Religion of Peace, which isn’t even a dogma of the Church. He should ask them why they are abandoning their Middle Eastern brethren and keeping their own people ignorant and complacent about the jihad threat.

The full article may be read here.
Posted by Barona at 17:30

Neocon answers to these questions wont' help though,as they are a large part of the problem. I haven't read Spencer's work on ISIS, but I am quite sure he doesn't cover any of the facts about its real origin and true purpose in the U.S.-Israel-Saudi instigated dirty wars in the Middle East.

Anonymous 00:49, if you read my other posts you will see that this blog is not neo-con in the slightest. The value to what I published is that it contains remarks stated by churchmen from the Middle East, exposing the fantasy of Islam.

Certainly the US, the Saudis and the Israeli zionists have blood on their hands. However, this does not excuse the followers of a "religion of peace" to react with brutal violence. Christians were persecuted by the brutal Roman Empire and we know how they responded.

That's a pretty wide brush you just painted the US with. Please keep in mind there are millions of devout Christians in the US, who live that way and vote thusly, and who are completely powerless when it comes to decisions made by the fascists in charge. Canada has it's own issues. Isn't Canada a nation that is pro-choice?