Papal Preacher Cantalamessa: A preacher of heresies ~ "...never allow a moral issue like that of sexuality to divide us..."

"Against the Roman Church, you warned, lying teachers are rising, introducing ruinous sects, and drawing upon themselves speedy doom. Their tongues are fire, a restless evil, full of deadly poison".
Pope Leo X, Exsurge Domine 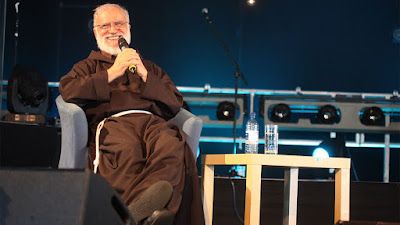 It is hard to know where to begin. When the Papal Preacher is preaching heresy, glorifying protestantism, claiming that a "moral issue like that of sexuality" should never divide us", that the "Christian world" is "preparing to celebrate" the Reformation... truly we have encountered a priest who is worse than these poor separated brethren.

The separated brethren at least have an excuse: a protestant upbringing etc. What excuse does Cantalamessa have? Did he not have Catholic parents, attend a Catholic school, go to a Catholic seminary? What has caused this man to fall into religious indifferentism? I ask all readers of this blog to carefully read and study Cantalmessa's speech. Can you imagine Sts. Louis de Montfort or Maximilian Kolbe preaching the same? 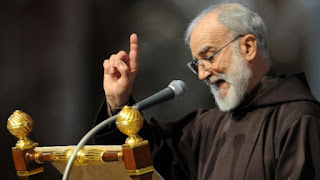 This is not the first time that the Papal Preacher has indulged in tickling the ears of the Faithful with foreign ideas. Vox Cantoris exposed his errors back in 2013.

In addressing adherents to the Church of England, Cantalamessa, glossed over what Pope Leo XIII spoke of as a "grievous wound" in Amantissima Voluntatis, and lied to the separated Anglicans about being a "via media" between the "churches". Is Cantalamessa not even aware that the Second Vatican Council explicitly addressed these separated brethren as members of ecclesial bodies? Only the schismatic Orthodox may be referred to as a "church"; for though in schism, the eastern brethren posses a valid episcopate, priesthood and sacramental economy. The ecclesial bodies of the West, following the sad days of the 16th century, no longer possess valid Orders, do not have a priesthood.

Now, let us proceed to the outrages, the abominable heresies uttered by this liar and preacher of the doctrine of devils, this Papal Preacher, Fr. Cantalmessa:

"The Christian world is preparing to celebrate the fifth centenary of the Protestant Reformation. It is vital for the whole Church that this opportunity is not wasted by people remaining prisoners of the past, trying to establish each other’s rights and wrongs". 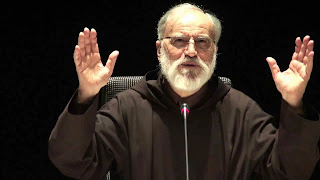 Are we really preparing to celebrate schism and heresy, Fr. Cantalmessa? Do you really wish Christ to celebrate Belial? We really intend to celebrate error? You must be mad. But you are consistent. Yes, you are going to "celebrate" for truth and error is "wasted", and we should not concern ourselves with "rights and wrongs" - after all, they don't really matter. Do they, Fr. Cantalamessa?

"The situation has dramatically changed since then".

Yes, Fr. Cantalamessa here I can agree with you. The situation is changed: for the worse. Our poor separated brethren now preach in favour of the sin of sodom, contraception and other sins.... What have you to say on this point? Ah, I believe you do have something to tell us!:

"We should never allow a moral issue like that of sexuality divide us more than love for Jesus Christ unites us".

But, I see that you wish to now interject St. Paul; the great Apostle who denounced sexual sins and warned that the practioners of same will not inherit the Kingdom of God. Have you read the Book of Romans dear Fr. Cantalamessa?

"We need to go back to the time of the Apostles: they faced a pre-Christian world, and we are facing a largely post-Christian world. When Paul wants to summarise the essence of the Christian message in one sentence, he does not say, “I proclaim this or that doctrine to you.” He says, “We preach Christ crucified” (1 Cor 1:23), and “We preach . . . Jesus Christ as Lord” (2 Cor 4:5). This is the real “articulus stantis et cadentis Ecclesiae”, the article by which the Church stands or falls".

Fr. Cantalamesa you are a liar! St. Paul did preach doctrine: preaching Christ Crucified is doctrine! You are a Judas priest!

"This does not mean ignoring the great theological and spiritual enrichment that came from the Reformation or desiring to go back to the time before it. It means instead allowing all of Christianity to benefit from its achievements..."

Blasphemy! Christ's Church is to "benefit" from heresy and error? Dear readers, notice how Cantalamessa expresses a further hatred for the doctrinal clarity that was professed by churchmen of long ago.

"...not imposing uniformity but aiming at what pope Francis calls 'reconciled diversities'."

Very interesting my dear Fr. Cantalamessa! Brilliantly put, "reconciled diversities". Are we now going to have "Catholic Modernism" or "Modernist Catholicism"? You tell us, dear Father. So, dear readers, the Papal Preacher is telling us: error and truth, lies and falsehood, Catholic doctrine and Modernist heresy - all reconciled in the counterchurch of the Antichrist and the False Prophet.

"The Anglican Church has a special role in all of this. It has often defined itself as a “via media” (a Middle Way) between Roman Catholicism and Reformed Christianity. From being a “via media” in a static sense, it must now become more and more a via media in a dynamic sense, exercising an active function as a bridge between the Churches".

No, Fr. Cantalamessa, the Church of England is not a "church"; is is a broken cistern from which the waters of life have long since vanished!

Dear friends, cardinals and bishops should be storming the Pope's Office to demand the removal of this heretic, this Judas priest, this evil malefactor and deceiver!

But they won't. In fact, Cardinals and bishops will be all coming out and proclaiming how lovely this heresy laden speech is. In doing so, they will be only confirming their own heresy.
Posted by Barona at 13:23

As a Church historian, i know that while the Reformation was a terrible event, it did produce the Council of Trent that brought many needed reforms to the Church, such as the establishment of seminaries and getting rid of absentee bishoprics. Would the Council of Tent have occurred if the corruption of the Church hierarchy was not addressed and the entry of serious reform minded saints , Pius V, Philip Neri, Charles Borromeo was not encouraged. God brought good out of evil in this case.

The protestants brought in a man made version of Christianity. As result most of the west is secular or pelagian. The true chuch of Christ the Catholic Church has suffered immensly from the protestant heresy. It is now being infected with the modernist heresy.
Old cathedrals in Europe that were once Catholic but went over to the reform are now just empty shells. The Faith has been taken out by protestants and replaced by man made religion.

Yeah, a 'little thing' like truths that do not change....should they be a source of division? Well, YES! I certainly know lutherans who are pro-sodomite and pro-abortion and those are sins that cry out to heaven and no PC society can change that.

It is the heresy called antiquarianism. Its' the idea that we can go back to a pure form of Christianity without all the developments that occurred after the apostolic age.

Dear Fr Jack, thanks for pointing that out. The good that God drew out of the evil has been a great help to the Church.

The man preaching the rubbish in this article is saying "let's return to those very same evils and goods, and adopt them and celebrate them."

The Faith I received at my Baptism was already lost once about twenty years ago, thanks to the disease in the Church that is spread around by people like this fellow.

I refuse and reject him and all that he believes.

I practice a different religion to this man, and have zero interest in whatever it is that he believes and practices.

Since God used the evil to bring about a greater good, it is blasphemy to say that those evils should be treated as good.

There is an old saying in the Church: "There has never been a chaste heretic. Never, ever."