Freemasonry and the Vatican: papal letter of condolences to Mali following terror attack DOES NOT mention Our Lord Jesus Christ 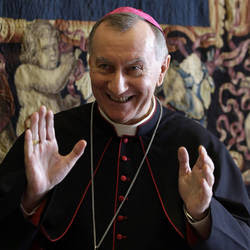 Continuing the masonic diplomacy that the Secretariat of State has become infamous for, Cardinal Parolin, on behalf of the Pope, has sent another deistic letter of condolence to the Archbishop of Bamako. As with the "condolences " sent after the Paris Terror Attacks, Our Lord Jesus Christ - even on the weekend in which, in the new Rite, the Feast of Christ the King is celebrated - is NOT MENTIONED. Are they drunk on ecumenical fantasy, or are they freemasons? Or, is it a mixture of both?

Yet we know, without him we can do nothing (John XV, 5). So, these Romans have actually done nothing - except blaspheme Our Lord Jesus Christ.

Having learned of the tragic attack, which took place in Bamako, His Holiness Pope Francis unites himself in prayer to the pain of bereaved families and the sadness of all Malians. He recommends all the victims to the mercy of God, praying that the Almighty welcome them into His light. He expresses his deepest sympathy with the injured and their families, asking the Lord to bring them comfort and consolation in their ordeal. Appalled by this senseless violence, which the Pope strongly condemns, the Pope implores God for the conversion of hearts and the gift of peace, and invokes abundance of Divine blessings on all those affected by this tragedy.

Secretary of State of His Holiness
Posted by Barona at 07:57

Email ThisBlogThis!Share to TwitterShare to FacebookShare to Pinterest
Labels: Crisis in the Church, The Persecuted Church, Vatican News, War and Peace