FULL REPORT: Mary Wagner's Trial in Toronto ~ Mary witnesses to the Gospel of Life and is found "guilty" of mischief, "not guilty" of probation violation 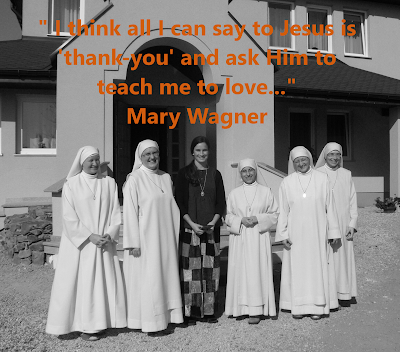 It was a cool, cloudy and foggy day for the conclusion of Mary Wagner's trial in Toronto. A drive in the prison van from Milton can take up to two hours to get through rush hour traffic into downtown Toronto. Both Mary and Linda Gibbons have in the past been transported in freezing vans with the heating turned off in the prisoner compartment. Just last January, Linda - only in her Vanier "greens" - on the way to court, was trapped in one of these sadistic ice buckets in minus 10 degree weather.

Yesterday at the Old City Hall courthouse, in Room M2, Mary's trial resumed at 10:57 a.m. before sixteen supporters - including Linda. Mary was led in, handcuffed, holding a small copy of the New Testament.

Prior to the commencement of the trial, Crown prosecutor Tania Monteiro, asked that the video evidence be placed under a "temporary sealing order" at the conclusion of the trial.

The final witness, Policewoman Emma Morley, was called to the stand. She stated that she received a radio "call for trespass", at 9:55 a.m, on December 12, 2015 and that it was at "a woman's clinic". Morley significantly admitted "it was not a priority call". At 10:04 a.m., Morley arrived to find P.C. Keegan already on the scene. "We entered the building... we waited for each other on scene and we went in together". "P.C. Keegan knew where to go...it was on the 4th floor". In the hallway - leading to that unit [the abortuary] - I observed flower petals strewn on the floor... there was a female there with a camera taping...we buzzed to get in".

Morley continued her testimony: "staff members there; they pointed out the lady over there...just to indicate who it was, as there were multiple people in the clinic at the time". Morley said that Keegan "...had dealt with her in the past; that is Mary Wagner".

I noticed that as Morley continued, Mary was quietly reading the New Testament; I glanced at my watch, it was 11:12 a.m. Morley continued: "we go over and speak with her... would she come with us, she needed [she emphasized] to come with us. There was no response. I grabbed - I took her elbow and then she cooperatively came with us". Morley then said that she and Keegan escorted Mary "...outside the building, close to the sidewalk". They informed her "...that she had trespassed and if she returned she could be arrested". "We stood by for a little bit...eventually we did leave". Morley testified that after this, she returned to her squad car to write up her report.

Morley continued with her testimony that shortly after this she "heard on the radio that Miss Wagner had returned to the clinic and staff asked us to re-attend". When Morley arrived on the scene, she testified that  "P.C. Keegan was already coming out with Miss Wagner arrested". "Keegan arrested her", Morley affirmed. Morley then spoke about alleged probation violations, "P.C. Keegan said "she was on conditions". Morley told the court that she followed Keegan back to Division 11, who had Mary in his squad car. Mary was taken to an interview room. So  concluded Morley's testimony.

Crown  prosecutor Monteiro began her :"respectful submission...Mary Wagner should be convicted... the evidence is overwhelming...as captured on the surveillance video...it was a woman's clinic that performed a number of lawful medical procedures....the staff had to use their own bodies to stop Miss Wagner for dialoging with women...pushing Miss Wagner, pulling Miss Wagner...Dr. Lupovici fell over backwards...they are lawfully doing their jobs...[for] personal and intimate medical procedures".

Monteiro claimed that they were "treated with a certain lack of kindness by Miss Wagner". Monteiro complained that Mary allegedly spoke to the expectant mothers, "...something to the effect of murdering your babies. I would respectfully submit the opposite". The Crown prosecutor droned on: "These women are using the property for lawful processes...for which they have a right". "She very deliberately interfered with these women from continuing in their medical needs". As Monteiro droned on, I could not help but notice that Mary quietly continued her scriptural reading, as the political show trial continued.

Monteiro lamented: "women eventually gave up. They had to wait for the police...retreat back...trying to do their jobs [and to] continue lawful use [of the abortion facility]." "Miss Wagner tried to re-engage with a new patient. Women and staff did everything they could to go about their business. Police arrived....Then Monteiro continued outrageously, "Miss Wagner was generally non-violent".

Monteiro continued her sad monologue: "we heard Miss Wagner was not welcome there...Miss Wagner is not allowed in that clinic for a number of reasons...she managed, notwithstanding to gain entry into the clinic... she spent approximately eighteen minutes there... it was an interference with lawful use of that clinic. Staff were upset...some women left". "It may be presumed that they abandoned their appointment. That amounts to mischief".

Monteiro tediously went on: "there was a degree of violence...the patients became distressed...they had to secure them away...staff started to take physical action against Miss Wagner". "Ostensibly Miss Wagner appears non-violent, undeterred, she re-enters...I can only presume she was hoping for another patient...luckily staff could observe [her]....Keegan found her in the elevator lobby".

Monteiro asked that Judge Mulligan convict Mary of the mischief charge and two counts of violation of probation. It was here that the Judge informed Monteiro that she was throwing out the probation charges, as " I don't have any evidence that Miss Wagner's date of birth came from her". The Judge was not satisfied that the Probation Officer had adequately identified Mary in the courtroom. Judge Mulligan continued:"I can't accept that date of birth...we have an issue...I am also mindful that Miss Wagner did not enter a plea". The Judge then called for a morning recess and stated: "I want to deliver [the ruling] this today".


Following the recess, Judge Mulligan delivered her verdict. Mary was found guilty of the mischief charge, and not guilty of two counts of violation of probation. The Judge said that Mary "...entered surreptitiously, by sneaking in; well aware of her status as not welcome...refused to leave...she stay uninvited. Miss Wagner only left when she was removed", and that  she"...interfered with the lawful operation [of the clinic]". The Judge also stated "...some patients left".  She further corrected Monteiro regarding criminal law, informing her that the charge of mischief is not a super summary offense, and that the maximum is six months, not nine which Monteiro was seeking.

As to the two allegations of probation violation, Mulligan threw them out stating: "Miss Wagner did not enter a plea... there is no admissible evidence to compare her date of birth to the probation orders. I find her not guilty of these two charges". The Judge then ordered the video evidence sealed; patients faces "...must be obscured if the tape is released".

Monteiro then stated she would "seek to tender  Miss Wagner's prior record". "I will be seeking to prove them". Seeking an adjournment, Monteiro tried to elicit from Mary an admission to her previous record, showing her a number of documents. Mary remained silent. She further attempted to entice her to speak by stating that a "defense counsel would ask for time served" and that Mary could be released as she was attended at court with a "supportive community". Mary did not fall for this manoeuvre.

After some discussion, the Judge decided that the next hearing will be April 25th at 10 a.m. in Room 112. As of yesterday, Mary has spent the equivalent of 144 days served, based on a calculation of 1.5, as she has refused bail. Barring any unforeseen happenings, Mary should be formally sentenced and then released with "time served" (and about two weeks extra) on April 25th, the Feast of St. Mark.

Mary, lovingly, we keep you in our prayers. May God be with you, as you enter Holy Week, and may His Mother protect you with her maternal mantel.

Dear friends, please continue to keep Mary in your prayers. Please especially pray for her and her intentions during Holy Week. We will be organizing another "Rosary Bouquet" for Mary that will conclude on Divine Mercy Sunday. Details to follow.

Will continue to pray for Mary and Linda.

I do support Mary's position and do pray for her trials with the law,fellow Christians.

A Christian has no biblical authority to break legitimate
state laws.

This is true no matter how heinous we may believe the laws are ...provided we are not personally compelled to obey unGodly orders from earthly power.

Neither do we have a New Covenant biblical right to interfere with the legal rights of people in the world nor attempt oral or subtle or written intimidation of them for not following God's laws which only we are commanded to obey by clear Scriptural prohibition.

In fact, Jesus specifically commands us, through the Apostle Paul, NOT TO DO SO in 1 Corinthians 5:9-13.

In addition,in my opinion, my Catholic Sister, Mary, plus Christian protesters like her are ineffectually and unnecessarily wasting expensive,limited, and valuable police and court resources and tax payers money when God tells us NOT to do what she is doing as the above addressed Scripture clearly says.

Blessings and shalom all!

Mischief must be a great heroic virtue since it saves human lives. May we all practice mischief. God bless you. Susan Fox www.christsfaithfulwitness.com