Mary Wagner: "UNBORN CHILDREN ARE NOT PROTECTED IN THIS COUNTRY" ~ an exclusive report on the opening of her trial on March 10th 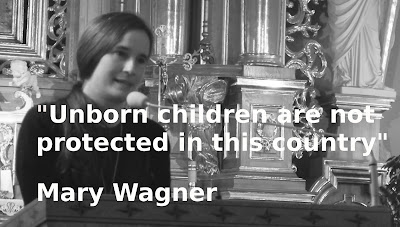 Just after 10:30 a.m., Mary Wagner was led down a corridor in the Old City Hall Courthouse by a single female guard, towards the courtroom. Mary was handcuffed and dressed in Vanier "greens". She smiled at us as we greeted her with: "God bless you Mary....we love you". Mary was surrounded by a total of seventeen supporters.

At about 10:35 the trial commenced under Judge Katrina Mulligan. Mary was given further disclosure by the Crown regarding probation violations. "I never received this", commented Mary, as the Crown gave her a small pile of papers. Mary then made her Pre-Trial Statement which included the following:

"I am prepared to proceed as I am today, I am making my statement in my appeal*...it is...more fundamental than this [the March 10th trial].

Unborn children are not protected in this country. I feel the best way I can respond to these charges is to remain silent and in solidarity with the unborn".


The crown then called the first witness, Probation Officer, Liana Mischianti. She began her testimony that Mary had violated probation. I noticed that Mary had begun to read a small copy of the New Testament while this was going on. Glancing at my watch, I noticed it was just after 11 a.m. "She's reading something. Is that a Bible" asked the Crown, as she approached Mary to show her the probation order.

Shortly after this, there was a recess. Linda Gibbons, during the break had this to say on the situation in Canada, and the lack of churchmen speaking up on grave evils, such as abortion:

"Silence in the pulpit is a scandal. Mary is doing the heavy lifting for the conformist Christians. In other words, going along to get along. Their actions expose them for coexisting with a death culture; ergo complicit".

With the trial resuming at 2:15, abortionist Ninia Lupovici (a co-owner of the abortion mill) was called to the stand. Lupovici claimed she was an expert in abortion, specializing in "terminations and D & C for complications of pregnancy". I noticed she avoided calling her business an "abortion clinic". I noticed the Judge and Crown seem to work together, the Judge helping the Crown describe the abortion factory's lobby. Lupovici complained about Mary, " my belief and hers are not the same...her views are detrimental to other people. Not acceptable to us..."

The first of two silent videos were then shown. The abortion factory lobby could be seen.  A woman was seen entering, approaching the desk and after taking forms, sitting down to fill them out. Several minutes into the eight minute video, Mary entered behind an expectant mother and immediately knelt before the woman who was filling out the forms. After pleading with her,  Mary went over to a second expectant mother, offering her a rose and suggesting she reconsider her imminent abortion. An abortion employee had come out by this time and could be seen on the video speaking to Mary. Abortionist Lupovici was then seen appearing and shortly after a few words, grabbed Mary by the arm dragging her towards the door; but somehow as Mary moved her arm to break free from this assault, the abortionist fell to the ground.

I noticed that as Lupovici testified Mary would be concentrating on reading from the Sacred Scriptures. Mary informed me yesterday (March 12th) that she did not wish to re-live the scenes from the abortion mill and did not watch the video. She did however hear some of the testimony of the abortionist and overheard that women left the mill, not going through with their abortions.

A second video was then shown. It showed Mary re-entering the abortuary. Lupovici claimed that Mary told women: "Jesus loves you. Abortion is murder". Lupovici claimed Mary's activity of distributing roses and asking mothers to reconsider killing their baby, "incredibly stressful to all of us..." "People who have a certain belief system think they should impose it on others", she claimed.

She also complained about the presence of Lifesitenews journalist, Lianne Laurence, lamenting that the police told her there was "nothing illegal about taking photos". Lupovici told the court: "We could not confiscate the camera". She had asked the police to do so. Though claiming there was another person "hiding in the stairwell" [how could she possibly know, if she was in the abortion mill?] she did not produce any evidence to substantiate this allegation.

Following the abortionist's testimony, Constable Keegan, the arresting policeman testified. Earlier he and his partner, policewoman Morley, were seen on the video somewhat roughly removing Mary from the abortuary.

Keegan claimed that he received a "trespass radio call" about a person who was "non-violent". As he testified, I noticed that Mary had again returned to reading from the New Testament. Keegan claimed that when he arrived he could see rose petals strewn outside the abortion mill, and many petals on the floor inside the abortuary. He found Mary sitting in a chair.

Mary was removed from the building and told she "was unwelcome", and that if she returned, she would be arrested. Keegan claimed he then left the scene to review his computer to see if Mary was in the system. He informed the court that his review brought up the fact that Mary's entrance into the abortion factory was a probation violation, and that he was preparing to return to arrest her for this. However, he stated that he then received another radio call that Mary was seen at the abortion mill again. He returned with policewoman Morley and found Mary outside the elevators on the 4th floor  and arrested her. The time was 10:31 a.m.

Mary was transported back to Division 11 and booked. Mary telephoned her lawyer, Charles Lugosi at 11:05 a.m. At 11:40 Mary was served with a notice for probation violation. The trial was then adjourned shortly after 4:30 p.m. and will resume at 10 a.m., in M1 at Old City Hall Courthouse in Toronto.

Please keep - as Mary requested yesterday to me - Ninia Lupovici in ycour prayers, that her heart may be softened, that she repent and be converted.

Please keep Mary in your prayers.

What an interesting story. It almost sounds like the arrest of Christ on Holy Thursday. You know they all fell to the ground when He spoke. Also where did all those rose petals come from? Did Mary throw them there? I wouldn't if I were she. When I give out roses (at the U.N. as a pro-life symbol) I'm trying to keep them in good shape for the recipient. However, Barona, Our Lady appeared in the Philippines with St. Theresa of Lisieux and they showered the area with miraculous red rose petals that had images of the saints, Jesus and the Blessed Mother in them. If that happens again, get someone to pick up the rose petals and check them out. This is a fabulous story. God bless you. Susan Fox www.christsfaithfulwitness.com

Thank you for reporting Mary Wagner's heroic witness to life and faith. If only the Catholic Church and the rest of us in Canada could provide the same kind of spiritual leadership withouth compromise then this nation would be a place where the culture of life and love would thrive. God bless!