"...where they crucified Him" ~ from a Homily on the Gospel of St. John 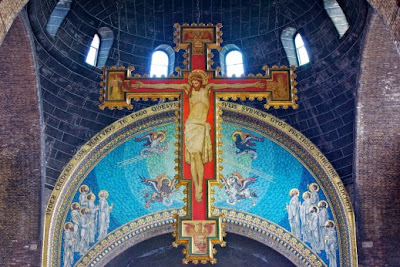 Then delivered he Him therefore unto them to be crucified. And they took Jesus, and led Him away. And He, bearing His Cross, went forth into a place called the place of a skull, where they crucified Him."

1. Successes have terrible power to cast down or draw aside those who take not heed. Thus the Jews, who at first enjoyed the influence of God, sought the law of royalty from the Gentiles, and in the wilderness after the manna remembered the onions. In the same way here, refusing the Kingdom of Christ, they invited to themselves that of Cæsar. Wherefore God set a king over them, according to their own decision. When then Pilate heard these things, he delivered Him to be crucified. Utterly without reason. For when he ought to have enquired whether Christ had aimed at sovereign power, he pronounced the sentence through fear alone. Yet that this might not befall him, Christ said beforehand, My kingdom is not of this world; but he having given himself wholly up to present things, would practice no great amount of wisdom. And yet his wife's dream should have been sufficient to terrify him; but by none of these things was he made better, nor did he look to heaven, but delivered Him up. And now they laid the cross upon Him as a malefactor. For even the wood they abominated, and endured not even to touch it. This was also the case in the type; for Isaac bare the wood. But then the matter stopped at the will of his father, for it was the type; while here it proceeded to action, for it was the reality.

And He came to the place of a skull. Some say that Adam died there, and there lies; and that Jesus in this place where death had reigned, there also set up the trophy. For He went forth bearing the Cross as a trophy over the tyranny of death: and as conquerors do, so He bare upon His shoulders the symbol of victory. What matter if the Jews did these things with a different intent. They crucified Him too with thieves, in this also unintentionally fulfilling prophecy; for what they did for insult contributed to the truth, that you may learn how great is its power, since the Prophet had foretold of old, that He was numbered with the transgressors. Isaiah 53:12 The devil therefore wished to cast a veil over what was done, but was unable; for the three were crucified, but Jesus alone was glorious, that you may learn, that His power effected all. Yet the miracles took place when the three had been nailed to the cross; but no one attributed anything of what was done to either of those others, but to Jesus only; so entirely was the plot of the devil rendered vain, and all returned upon his own head. For even of these two, one was saved. He therefore did not insult the glory of the Cross, but contributed to it not a little. For it was not a less matter than shaking the rocks, to change a thief upon the cross, and to bring him unto Paradise.
Posted by Barona at 08:20