This blog began reporting on it, even following and translating Polish media reports.The result is thousands upon thousands of readers coming from all over the world. Many, many visits from Italy and even the Holy See.

Was Luigi "Cocaine" Capozzi charged? No! For some mysterious reason, the police released him into the  hands of his superior, homosexualist Cardinal Cocopalmario, who spirited the active sodomite and cocaine user, Capozzi off to Monte Casino. Not for "Cocaine" Capozzi a miserable jail cell, a trial, prison. No, this jet-setting, thieving, vile high-flyer, this loathsome traitor to Jesus Christ will be sent to recover from his drug use to the safety of Monte Casino. And then.... back to the Vatican like Monsignor Ricca, the notorious party-animal and homosexual. 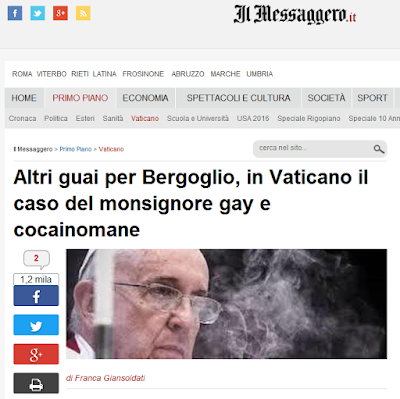 There is another scandal in all this. They have been joined by "official" Catholic media in the attempted conspiracy of silence. For example: EWTN, the Catholic Register of the Archdiocese of Toronto, Salt and Light Media, Zenit, Catholic News Service.....

Not one, not one of these bishop and/or clerical controlled agencies is reporting, asking serious questions. For example:

Why did the police not retain custody of "Cocaine" Capozzi?

Were cardinals and bishops present?

Where did Capozzi get the money for the drugs?

How extensive is the drug sub-culture in the Vatican?

What other drugs, if any, were found?

What is Cardinal Cocopalmario's involvement in all of this?

So many questions. So much silence. It tells us a lot about the servitude, the climate of fear that employees live in if they dare step out and oppose their clerical and episcopal overlords.

Dear friends, TO THIS DAY, Luigi Capozzi REMAINS a member of the Pontifical Council on Legislative Texts.

That tells you exactly HOW LITTLE they care about his sinful lifestyle. Homosexual behaviour, a betrayal of priestly vows, drug use, criminal activity..... none of this concerns the men in power in Rome.

Pray dear friends, but remember this: Our Lord Jesus Christ is in charge of His Church, just as He was in perfect control of the that first Good Friday. He was the Master of His own Crucifixion. He remains the Master today. As St.Paul wrote it is the "mystery of iniquity" that is unfolding, and has been for two thousand years.

Our Lady of Fatima and Akita, pray for us.
Posted by Barona at 09:44

You got your wish...