Archbishop Terrance Prendergast of Ottawa and Justin Trudeau ~ the Church in Canada betrayed by bishops!

There are those who argue that the Archbishop of Ottawa, Terrence Prendergast is a "good bishop", that he is Canada's "best". The problem is: is "good" just good enough?

What are we to make of an Archbishop (and fellow churchmen, for that matter) who so catechize (?) the Faithful, that, in the millions, they vote for a man who openly told them he would promote abortion, euthanasia, the "LGBT" agenda etc. etc.?

Yes, the Archbishop may well have a Latin Mass parish, may well permit the Ordinariate in Ottawa, but what of it? Is this halting the slide? Comfortable, "Fifties" Catholicism just won't do any more. It may well placate the few hundred, but what of the million plus other souls in the Archdiocese? Ottawa needs a St. Paul! 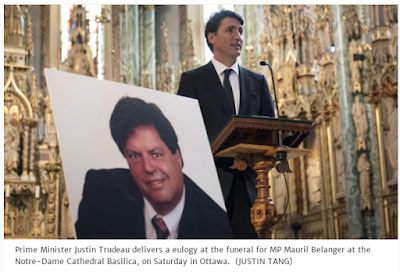 The outstanding blog, "Contradiction" has a series of excellent, very well researched and thought out reflections on Archbishop Terrance Prendergast. Go and read them here.

The following is offered us - by "Contradiction" as a brief consideration regarding if a bishop is doing a good job or not.

Imagine a man who does a good job every day at work. All those that work with him express respect for him and the job that he does. This man also does his share of volunteer work at the food bank and at the soup kitchen as well as serving on a few Church committees. But because he doesn’t believe in putting locks on his doors strangers come into his home and abuse his wife and children, sometimes even when he is there. Since he can’t bring himself to offer any resistance to these strangers he is of little help to his family, some of whom suffer daily from the abuse. Furthermore these tyrants spend time in the basement doing things that undermine the foundations of his house. He takes no action only to make occasional criticisms. Perhaps he thinks the house will survive for many years yet and no action is yet required. Perhaps he thinks his family will survive the ordeal even though there’s much pain. Besides, it’s hardly worth a fight, he thinks, and if there were a fight he may get hurt or other members of his family.

What are we to think of such a man? Will we focus only on the good that he does and ignore his failings? Will we give him a free pass? I say no.....

More dangerous than his stalemate with the overt heathens, is his legitimization of "conservative" subversives in the Church. The Michael Corens have done much more damage than the Gregory Baums. Lambs seeking safety in pious appearances run straight into the jaws of wolves.

Why, oh why, is that Justin Trudeau not openly excommunicated? He is flagrantly opposing catholic Church teaching, and yet he seems to be able to claim being a "good catholic"! I purposely did not capitalize Catholic as he is doing the work of "catholic" in the sense of being a leader of a catholic (universal) hatred of the true Catholic Church. The time is long overdue for the bishops of Canada to formally and publicly EXCOMMUNICATE Justin Trudeau.

Soon, Thomas Rosica will join their ranks. The betrayal will increase.

Soon, Thomas Rosica will join their ranks. The betrayal will increase.

Unfortunately, George Bochenek … Most bishops in the West or Christendom are afraid of public condemnation in the press when they do not go along with the elitist, politically correct thinking of the times, ie. Gay Rights / Abortion, etc. They are cowardly men who fear man more that Almighty God Himself. I pity them and their souls, as they will have "Hell" to pay for their inaction. Their inactions are a great appeasement to heterodox thinking and aid the loss of respect for the church. Don't get me wrong, there are other evils that contribute to this, too. Revelations does say that in the End Times … Good will be considered Evil and Evil will be considered Good. Pray the Rosary and the Divine Mercy chaplet daily.