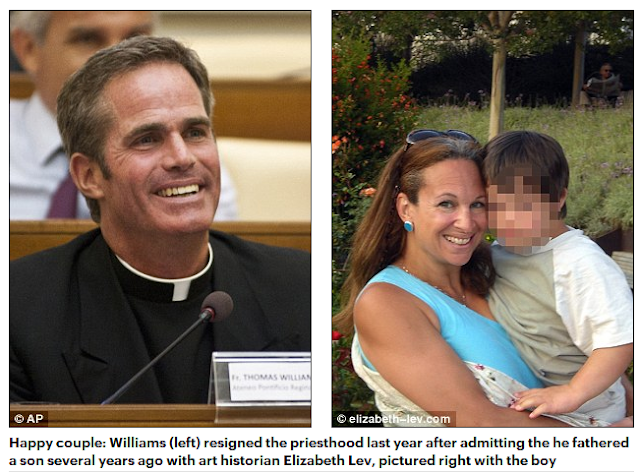 Thomas Williams, who fathered an illegitimate child with EWTN's Elizabeth Lev, - whilst still a priest with the corrupt Legionaries of Christ - has opined about Church Militant on the neo-modernist Crux (run by the "Knights" of Columbus). Williams has since "married" (?) Lev who from a previous relationship  has two other illegitimate children. Lev continues to write for Zenit as well as teach at the neo-modernist Christendom College. It should be noted that she has also written a book with the prominent Americanist, liberal Catholic, George Weigel.

Crux even had the audacity to claim that Williams was being interviewed to provide critique against Fr. Antonio Spadaro!

As for Crux, readers need to take note of the connection between the "Knights" vis-a-vis multi-millionaire boss for life, Carl Anderson and the Vatican Bank, IOR (well known for money laundering etc.). But that is another story.

Williams is quoted by Crux saying:

"Is there a website called Church Militant that spouts all sorts of crazy right-wing ideas about the Catholic faith? Yes, yes, there is."

There you have it! From a man who disgraced the sacred priesthood!

Really, dear readers, should Williams be giving his ideas about the Catholic Faith, that he so disgraced whilst an active priest?

Yet, according to his bio he certainly seems to make a lot of money giving his "opinions".

Williams continues to lecture publicly at the Vatican, at the neo-modernist and Americanist, "Acton Institute" (of homosexual Fr. Robert Sirico infamy. The Acton Institute is a multimillion dollar outfit, paying employees very, very handsomely from donations. Did they pay Williams, how much did he get to speak to them?)", Ave Maria University (another neo-modernist establishment) and so on.

Should he not be living a quiet life of prayer and penance?

The Rev. Alvaro Corcuera wrote a letter to all Legion members in which he admitted he knew before he became superior in 2005 that the Rev. Thomas Williams had fathered a child years earlier. He said he had heard rumours of the child even before then when he was rector.
Corcuera said that after becoming superior in 2005, he confirmed Williams's paternity yet did nothing to prevent him from teaching morality to seminarians or preaching about ethics on television, in his many speaking engagements or his 14 books, including Knowing Right from Wrong: A Christian Guide to Conscience.
Williams, for example, was the keynote speaker at a Legion-affiliated women's conference last month in the U.S.
Williams admitted last week he had fathered the child after The Associated Press confronted the Legion with the allegation. In a new statement Tuesday, Williams said he had resisted his superiors' encouragement to keep a low profile after the allegations were known to them.

Dear readers, just this brief post demonstrates to you the intricate and powerfully monied Americanist establishment within the Church in America. It, along with the usual suspects is now joining hands to attack Church Militant.
We now see the emergent union of overt with covert dissenters.
Posted by Barona at 12:27

Did I miss something about Christendom College being neo-modernist? I'm not aware ever hearing anything like that about them, I thought they were one of the extremely few faithful Catholic colleges left.

Consider our Argentine Pope and all the chaos swirling around in Spain and its former colonies, and ask yourself if this doesn't explain what's happening:

The Thomas Williams / Liz Lev scandal is far worse than you can imagine. Fr. Thomas Williams baptized his own son as he and Lev figured that this would help cover their tracks. Also don't forget that Lev is the eldest daughter of that darling of the Deep State, Mary Anne Glendon, and Williams and Glendon coordinated for years in character assassinating all of the whistle-blowers against the bisexual incestuous rapist founder of the Legion of Christ, Maciel.

I am appalled at this post. I live in Rome, I work with many people who are giving their all here in a very difficult climate, and I know many of them personally whom you have dragged through the mud. Sirico converted completely and does immense work to help educate and develop strong leaders and priests around the world. Acton is a tremendous resource and hub for people from the Trads to the blissfully unaware conservatives. Williams and Lev are legitimately married and living humble family life, slugging it out in the trenches here in Rome with the rest of us. You have completely disregarded the repentance and conversion of multiple people in this slander, who have amended their lives and live faithfully and fruitfully in their responsibilities. Even if they were still wrong, there is no hint of charity in this post. Different people disagree on (even important) details, but we are all playing on the same team, concerned about the same issues with this papacy and the Magisterium, and all taking the threats and the personal and professional persecution in Rome.

As an American who understands the cultural and geographical issues on both sides of the Pond, I will also add that there is a whole different experience and set of risks that one faces when living in Rome, as opposed to in relative safety and distance in the US or Canada. Certain people are able to be more vocal and strident in what they say without consequences, which would slam the doors for us over here in Rome. This is frustrating for those of us who are facing opposition over a dinner or in meetings. Hence frustration with the likes of Voris, who doesn't always get the best sources and shows little diplomatic restraint.

Above all we need to remember that we are all missionaries and that while we must speak the truth clearly, we also need to be diplomatic and respectful and try to win our brother over, or at least have taken the absolute high road in our dealings, so that nothing can be held against us. The Dubia cardinals have shown this with immense humility, class, grace and peace, while sacrificing nothing of the truth. Instead you have attempted openly to humiliate brothers and sisters in the Faith. How is this Christian?

The people you name in this article are NOT the enemy. This post does nothing to help the Church or to help those in the trenches in Rome. Please remove it.

Anonymous 5:51. Another attack on Michael Voris? He "doesn't always get the best resources and shows little diplomatic restrain"?

It is Thomas Williams who showed lack of restrain and character assassination when he labeled Michael "crazy, right wing...".

I am not concerned with Lev's or Williams' financial situation, but I can say they are not pressed for cash. Paris is not cheap.

I will say this: the spiritual and moral crime committed by Lev and Williams though forgiven in sacramental Confession needs to be followed with a manifestation of humility, repentance and they removing themselves from professional lives based on religion and connected to the Vatican. Both their internet presences do not show this at all. He continues to lecture and sell books he wrote while an active priest.

It was not me who put those words in Williams mouth. He spoke them, he has to suffer the consequences, when as a public figure associated with a woman who also still maintains a public profile - his past will be brought up. I see arrogance, narcissism.....

Leading a "humble family life"? Interesting remark. Lev just recently mocked Francis Rocca on Twitter? Why? What business has she to be discussing these issues at all? What business does a woman who fornicated with a priest have in daring to question someone else's actions? This is a terrible pride.

By the way, there should be no "professional persecution" in Rome, as serving Christ and His CHurch is a vocation. This is one reason why Grace has been withdrawn and the Church is in seeming free fall. Christ will not be mocked. From what I have read of Church history, the saints in the early centuries during the persecutions were not professionals or paid for the spreading of the Gospel. The Gospel must always be spread with out attachment to filthy lucre.

My son is a faithful, celibate Catholic priest today (12 years) who spent 2 years in the L C seminary when he was young. His vocation was saved because he left that madhouse. It was a strange cult that was masked in orthodoxy. Virtually every ex-priest that he knows has a disrespect for the principle of religious celibacy. Simply stated: their problem is below their beltline.
Being a good priest is hard. They are overworked and many, still paying off student loans. They respect tradition and their vows. If you've got a good, faithful priest let your bishop know for goodness sake.

I'd like to 2nd the question posed in a previous comment about Christendom College - neo-modernist - really? Where is that coming from?

I never knew this - I knew the guy married, but never knew it was to Elizabeth Lev. I love her! What a beautiful couple. He was laicized, so everything is fine now. Catholics have the sacrament of penance when they sin and now they have made things right. Thanks be to God.

Elizabeth Lev does not teach at Christendom College though she has given talks there. And to call Christendom "neo-modernist" is outrageous.

Christendom College has invited a number of prominent neo-modernists to lecture. Two prominent figures come to mind: Robert Sirico and George Weigel. Both these men are what Pius XI termed, "social modernists". Social modernism is as pernicious and dangerous as doctrinal modernism, for ultimately it is rotted in a false doctrine.

As for Lev, it is hard at times to keep up with the number of universities where she lectures; given her very active lifestyle of traveling, teaching and lecturing. She should spend more time caring for her family, especially her young Downs-Syndrome child. Would you not agree?

Wow, thank you, what a great response! Lev even compares herself to Mary Magdalene, like if the Magdalene ever dared to set her eyes on a man consecrated to God. Arrogance, no shame, and bad example, that's all they have shown since their scandal was made public. Humility? What humility? Do not lecture us about knowing right from wrong! You know nothing about that, Mr. Williams. Burn your books and spend your life in penance for all the people you fooled while living a double life with your mistress.

I can't understand the crack about Christendom College.