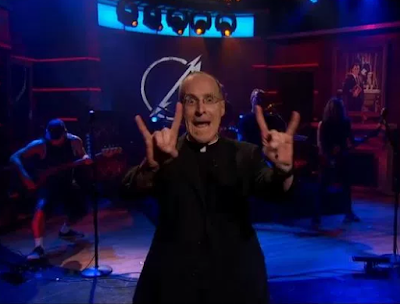 James Martin S.J. has been making a name for himself recently, with his aggressive promotion of his book, "Building a Bridge". Just the other day, Martin received "thoughtful and generous commentary" of the book by part-time Vatican Spokesman and CEO of the crumbling, Salt and Light TV network, Thomas Rosica CSB.

In an interview, about his book, Martin is quoted as saying:


"The church’s [sic] stance [stance, Fr. Martin? Is that all it is] on these matters is clear: Sexual relations between people of the same sex are impermissible, as is same-sex marriage. But these are teachings that every single L.G.B.T. [uses "gay liberation" language] Catholic knows and have been told about over and over [as if to say, the Church is just droning mindlessly] . In fact, sometimes these prohibitions are the only thing that Catholics know about L.G.B.T. issues.

At the same time, the L.G.B.T. community’s stance on those teachings is clear: Same-sex relations are part and parcel of their lives. (I am leaving out the small portion of the L.G.B.T. community [oh dear, what are we going to do with those few good Catholics who offer up same-sex attraction as a cross to be carried?] that thinks otherwise.)...."

There you have it, AT NO TIME does he express  support or even sympathy for Church teaching. Martin's twisting and equivocation is diabolical and leading souls to hell.

Dear readers, you decide if Martin is calling for celibacy for those afflicted with same-sex attraction. I, for my part do not.

James Martin S.J. is a Judas. He is a disgrace to the priesthood. He needs to retire to a monastery and save his soul.
Posted by Barona at 18:26

I think it is time to stop pretending that that father has no personal interest on this issue. He needs to come out of the closet and stand in the light.

A wolf in sheep's clothing, much? This Jesuit knows when to sound orthodox, that's for sure.