TRUMP ~ PUTIN SUMMIT at G20: the REAL reason why Russia is hated

Is it really Syria, Iran, the Ukraine, Georgia etc., etc? Or, is it something else. Ask the average man on the street and he will be hard pressed to identify those four countries on a map.

For well over a year now, we have been told by the media that Russia has "meddled" in the US Elections. Really, Where is the evidence?

Strange how the media, that loved the atheistic Soviet Union; made every excuse for them, now suddenly hates Russia. This same, secular, pro-abortion, pro-homosexual media. It should tell us something, It should tell us a lot.

I have yet to see one document, hear one audio recording, see one video, see one screenshot, see one computer record of Russian meddling.

Indeed, on the eve of Trump and Putin meeting in Hamburg, the major news agencies (really appendages and agents of  spy and security agencies, which in turn are controlled by powerful international financial interests) are claiming that Russia has actually increased her spying. Needless to say, they have provided no evidence.

However, there is meddling by foreign powers; massive meddling. Indeed, so influential are these foreign meddlers, that the media dare not touch them. But why would they shine the light on foreign meddlers, when the owners of the same media are themselves foreigners?

Obviously, then, upon viewing the above screenshot, it is not "meddling" that the media is really concerned about. So, what is it?

Please view this video that has since been removed by youtube, for obvious reasons. 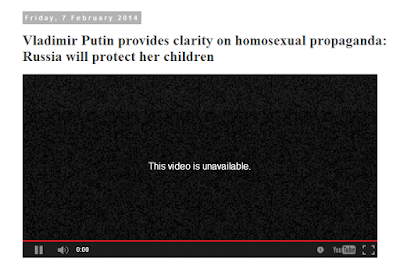 Let there be NO doubt, "they" hate Orthodoxy. 'They" hate the growth of the Orthodox Church, which Putin is enabling. "They" hate  the fact that Orthodoxy is also very influential in Russia in combatting the scourge of abortion and the moral plague of homosexuality, and sexual debauchery. Let there be NO doubt: the western media infested with  homosexuals, sexual libertines, and moral degenerates eagerly does the bidding of its various anti-Christian (and hence, anti-Orthodox) billionaire owners.

The media is well aware of what a resurgent Orthodox Church means in the largest, most powerful European country. It means a very serious roadblock against the building of a one world, secular, masonic government without Our Lord Jesus Christ.
Posted by Barona at 14:00

The Freikorps of the Weimar Republic, that paved the way for Hitler, was rife with homosexuals. Gender ideology was born in 1920s Berlin. Cultural Marxism was formalized and weaponized in Frankfurt as a technique of eugenic brainwashing. The current G20 meeting in Germany has great symbolic meaning for the soul of Russia. Canada's foreign ministers have been notorious for meddling in geopolitcs of concern to Russia -- John Baird the boylover and now, Chrystia Freeland the closet Nazi. That's a pretty consistent record of homofascism.