The Holy See Mission to the UN: the Catholic Church will oppose abortion, contraception and gender ideology.... 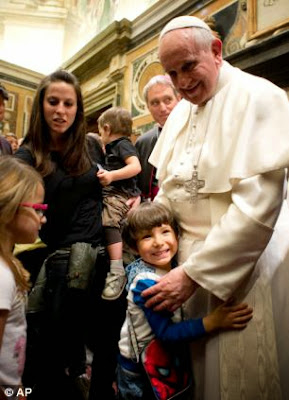 Just before his arrival in the United States, Pope Francis fires a warning shot that the Catholic Church will not be intimidated, nor silenced.
From the Holy See Mission to the United Nations:

...While agreeing with most of the goals and targets enumerated in the Agenda, the Holy See, in conformity with its nature and particular mission, wishes to make the following reservations on some of the concepts used therein.
1. Regarding the terms "sexual and reproductive health" and "reproductive rights", the Holy See considers these terms as applying to a holistic concept of health, which embrace, each in their own way, the person in the entirety of his or her personality, mind and body, and which foster the achievement of personal maturity in sexuality and in the mutual love and decision-making that characterize the conjugal-relationship between a man and a woman in accordance with moral norms. The Holy See does not consider abortion or access to abortion or abortifacients as a dimension of these terms.
2.         With reference to the terms "contraception", "family planning", "sexual and reproductive health", "sexual and reproductive rights", “reproductive rights”, and any other terms regarding family-planning services and regulation of fertility concepts in the document, the Holy See reaffirms its well-known position concerning those family-planning methods which the Catholic Church considers morally acceptable and, on the other hand, family-planning services which do not respect the liberty of the spouses, human dignity and the human rights of those concerned.
3.         With reference to "gender", the Holy See understands the term to be grounded in the biological sexual identity that is male or female.
4.         In relation to paragraphs 2 and 3 of this Statement of Position, the Holy See also reaffirms its reservations to the outcome documents of the International Conference on Population and Development, in Cairo and the  Fourth World Conference on Women, in Beijing.
5.         With respect to "education" or "information" on "sexuality", the Holy See reiterates the "primary responsibility" and the "prior rights" of parents, including their right to religious freedom, when it comes to the education and upbringing of their children, as enshrined, inter alia, in the Universal Declaration of Human Rights and the Convention on the Rights of the Child. In that sense, the Holy See wishes to underline the centrality of the family, “the natural and fundamental group unit of society,” as well as the role and rights and duties of parents to educate their children.
6.         The Holy See places its reservations on paragraph 27 of the Declaration and on Targets 3.7 and 5.6.
7.         The Holy See underlines that the Agenda is to be read in line with the properly interpreted “purposes and principles of the Charter of the United Nations, including full respect for international law…the Universal Declaration of Human Rights, international human rights treaties” (paragraph 10).  In regard to non-binding instruments that are also mentioned in the Agenda, the Holy See emphasizes the important distinction that needs to be maintained between treaties, which have been formally negotiated and adopted by States with the intention of creating legal obligations, and other international documents which do not have the same authority. The Holy See does not endorse principles in any international or regional non-binding instrument that differ from those set out herein, and articulated in her teachings.
Posted by Barona at 09:38