Mary Wagner reflects on Laudato Si: "a profound loss of the sense of God" has led many environmentalists to support the culture of death

"Since everything is interrelated, concern for the protection of nature is also incompatible with the justification of abortion"
Pope Francis 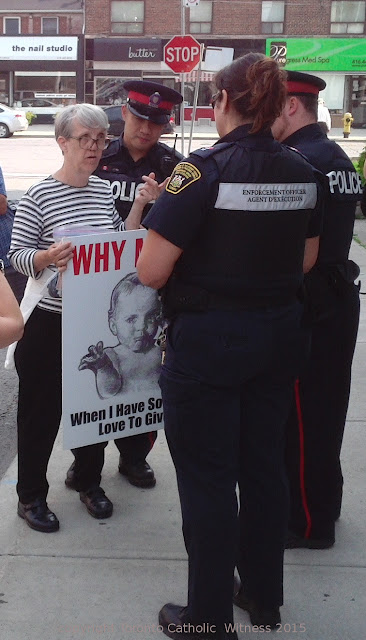 With the recent arrest of Linda Gibbons for defending the right to life of the unborn child, here in Toronto, and with our Holy Father, Pope Francis, seeing the epidemic of abortion, this very week extending universally to all priests the power to lift the excommunication and grant absolution to repentant mothers for the grave sin of abortion, we are re-publishing, Mary Wagner's reflections (originally published July 11, 2015) on Pope Francis' recent encyclical, Laudato Si. 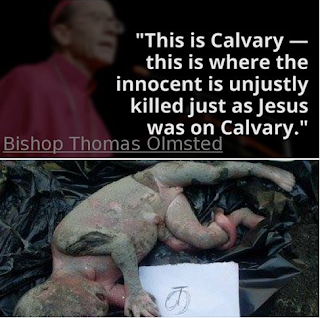 The Holy Father himself said, to avoid the spreading of  tendentious and erroneous misinterpretations of this encyclical, that it is not a "green" document, but is to be placed within the social teachings of the Church (c.f. Laudato Si, 15). Before him, both St. Pope John Paul II and Pope-Emeritus, Benedict XVI have written that true ecology begins with human ecology, that there is no environmental movement worthy of the name without the protection of human life - from conception to natural death.

Pope Benedict, in 2011, spoke these words to the bishops of Brazil:

It is also important to say that without clearly defending human life, from conception until natural death; without defending the family, based on marriage between a man and a woman; without truly defending those who are excluded and marginalized from society, without forgetting in this context those that have lost everything, victims of natural disasters, we could never speak of an authentic defence of the environment.

Several years ago, a friend and I were contacted by a man whose girlfriend was pregnant and planning to abort their child. He was a dedicated environmentalist, as was his girlfriend, who had come to Canada from Europe to work with him. Strongly against abortion, he was distraught that his girlfriend could overlook the very life of their child for reasons that seemed unclear to him. This woman whom he loved, who, when cleaning once stopped the vacuum to usher a spider to safety, seemed willing to accept that her own child would be vacuumed out of her womb.

Though he was the father of this child, there was nothing, legally, he could do to protect his baby if his girlfriend ultimately went ahead with her plans. He was awake he was speaking to two people who had been arrested trying to spare women and their children from death, and we spoke about how crucial it was that he be present to her and to stand by her and their child, even if he would have to stand in the gap for them at the place their child was scheduled to be killed. But the first need was to pray. He was a fallen-away Catholic and his girlfriend had no faith. It must have been the Holy Spirit that prompted me to ask him if he knew what kind of a relationship she had with her mother. They were, in fact,m estranged. I strongly encouraged him to take her to a counsellor who would help her work through what I sensed was her own fears of becoming a mother, fears which possibly stemmed from her own failed relationship with her mother.

Desperation in his face, he agreed to this. We heard back from this father some weeks later. He shared with us that they had found a counsellor who indeed was able to help her. Some months later, their son was born! He would now be in in his teens.

I studied at the University of Victoria a very "green" campus in a very green city. Our pro-life group was small and harassed quite frequently. We had to fight even for the right to exist as a "club", since the Students Society then (as now, I believe) had a "pro-choice policy" which was used to seek to ban our club status. It always seems very strange to me that the people who were most often opposed to recognizing the unborn child's right to live were the same ones fighting for animal rights or for respect for the environment. How could so many people be so passionately concerned for respecting the resting places of birds or the well being of other species yet at the same time care nothing for the utterly helpless tiny humans torn from their only viable habitat and brutally killed in the process - or left to die? I realised that this disconnect stemmed from a profound loss of the sense of God which led to a failure to grasp the sanctity of human life, and more specifically, to the personal tendency to see oneself as insignificant or even, by one's very existence, as part of the problems of the world, such as environmental degradation.

A Greenpeace volunteer who once came to the door asking for donations responded thus to my question, "why do you and Greenpeace not oppose abortion"? "Well, humans are not an endangered species"!

Though I've only had the chance to read excerpts from Pope Francis' "Laudato Si", I rejoice that he has taken on the subject of the environment. Let us pray it will be read by many and that all of us are of good will but do not yet know creation's Creator will be led to believe in Him, "For from the greatness and the beauty of created things their original author, by analogy, is seen" (Wisdom, 13:5).

Thank-you, Pope Francis, for drawing our attention to the gift of creation, to our call to respect the earth and its inhabitants, (especially the vulnerable of human beings), to our interconnectedness, and ultimately to the one who, out of His superabundant love calls us into existence and has entrusted us with the beauty of creation so that we in turn, might make out lives "something beautiful for God" (Mother Teresa). Praised be the Lord Our Father, Jesus and the Holy Spirit!