Pope Francis' visit to the Little Sisters of the Poor ~ the EVENT that the clerical twitterati DON'T want you to read about! 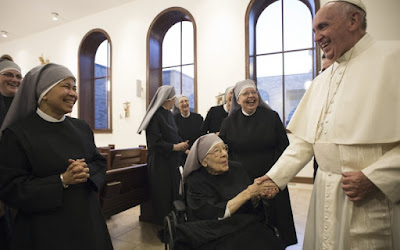 Pope Francis' visit to the Little Sisters of the Poor - who are being actively persecuted by Barack Obama - was the most important visit he undertook in the United States.

Get Religion has an excellent review of the secular media non-coverage (I might add very poor covered by much "Catholic" media as well). As Get Religion points out, the visit was either very briefly noted or not even mentioned by many a major media agency, including, they say, CNN (though Frs. Thomas Rosica, Edward Beck were appearing day after day on the network to provide "commentary"). 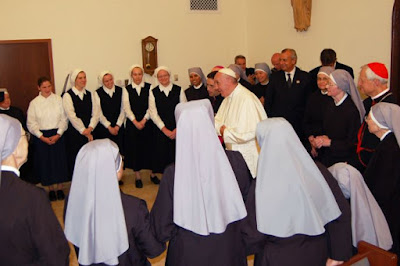 Indeed, the clerical "twitterati", from James Martin S.J., Matt Malone, S.J., Thomas Reese S.J. and the two aforementioned lesser known Twitterers appearing on CNN, have probably been bruising their fingers with all their tweeting and re-tweeting over the past week. But not ONE word from these priests on the Holy Father's visit with the Sisters. And, of course, not ONE word about the scandalous selection of active homosexual and "gay" activist, Mo Rocca as Lector - except Fr. Martin (so far) coming out in favour. 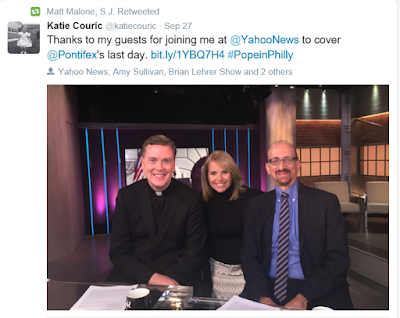 Simply put, the Pope's visit and support of the Sisters is not in keeping with the narrative that these men have so carefully constructed over the past couple of years since the Pope's election. What these men have put together is their graven image of what Pope Francis is to be: not what he is. Readers can review their writings to see where each of these men stand on what some of them like to call "hot button issues". I ask however, why would a grave sin be a "hot button issue" at all? Either something is sinful or it is not. Already such words imply an uneasiness with identifying sin. 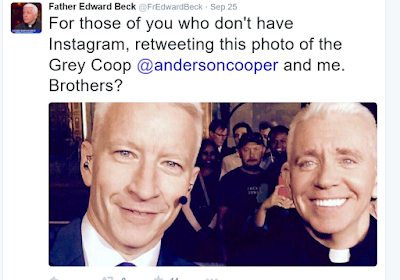 For men who love to talk, to be seen, their silence about the Sisters is more than bizarre, it denotes something more. Perhaps they should tell us?

They have, of course, been likewise silent on the Pope's meeting with Kim Davis. They seem to always have ample time to be busily tweeting away (if they are not posing for photographs with their pro-abortion and pro-homosexual journalist friends; we don't want to talk about "hot button issues" - sin - do we? It is just all "luv, luv, luv..."). 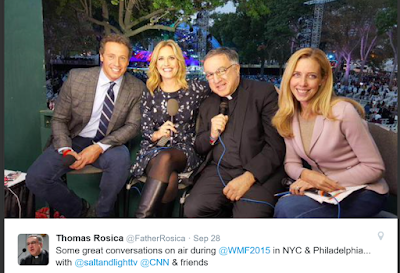 The Holy Father's meeting with Kim Davis has been neither denied nor admitted by the Holy See Press Office. Read: it happened. The Pope met her, or they would have most certainly denied it with vigor (and delight).

This Papal meeting is a massive setback to the homosexualist agenda advocated by so many churchmen who seek to water down the teaching of Christ and His Church on the grave sinfulness of homosexuality (just as was done over 40 years ago on contraception: so muddy the waters that most Catholics ended up not knowing what to think, and fell into dissent). One notices, for example, the approval  given to Cardinal Dolan and his lackeys in the selection of Mo Rocca by James Martin S.J. Would Fr. Martin be so enthused had Mr. Rocca's sin been not homosexual acts, but say: serial rape?

The question now is: will the visit with Kim Davis be Pope Francis' "humane vitae" moment? Will the media now turn on the Pope? Will the neo-modernist adulterist and homosexualist churchmen abandon any hope in manipulating him along the path they wish to lead the Church and join with the media in destroying him as they destroyed Pope Benedict?

Pray for the Pope: that he, in the words of his predecessor not "succumb to the wolves". In fact, Pope Francis again and again, at every talk in America, ended with these words:"...and please, don't forget to pray for me".

Is he telling us something?
Posted by Barona at 11:43

yes i believe he is trying to tell us something. as Our Lady told us to pray, for the Holy Father and Lord Jesus told us " pray much for the Holy father, he has much to suffer," lil Blessed Jacentia was non stop praying for him. she saw the Pope kneeling and crying, and people were shouting at him! was this pope benedict or Pope Francis in dire need of prayer and Benedict. the only strange thing is hes asking athiest if possible to pray for him. and why is God allowing him to be accepted by the world? why is he speaking the language of the world? you know its so strange, He is one of the very bishops that actually responded to Fr Gruners letters. and He maintained adm promoted devotions to Our Lady of Fatima. whats going on? only Lord Jesus knows. we should just obey Our Lord and do the praying, and let the Lord deal with it.