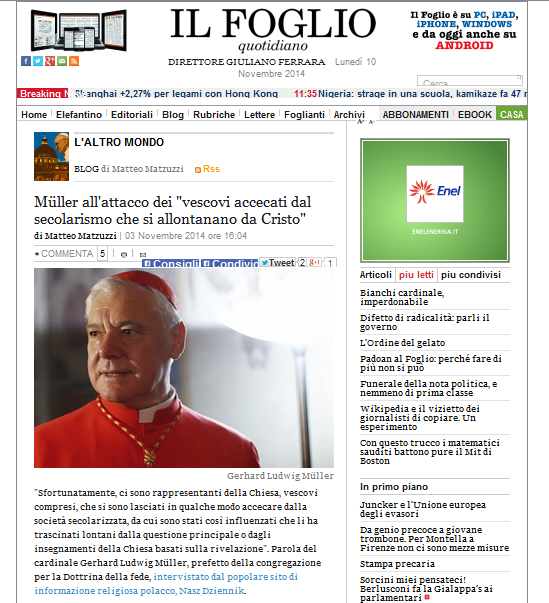 Prior to the rise of the internet, information for Catholics was restricted to the Archdiocesan newspaper, print magazines, journals, and the like. It all involved cash and manpower. Not any more. Now, a small handful, or even one or two intrepid, hard working people can have a reach that is as large or even far larger than, for example an Archdiocesan newspaper.

With the freeing up of information via the internet, especially through social media and blogs, Catholics are getting access to information that would have been impossible before. Take the recent Synod on the Family. The real truth about what happened and  how it happened only became available from "unofficial" Catholic sources. Catholics did not learn from the local diocesan newspaper that the Synod was manipulated, nor that the passages on homosexuality from the interim relatio were inserted surreptitiously by Archbishop Bruno Forte, nor that these same passages were objectively evil (indeed they were told by "official" Catholic agencies that these passages were to be applauded), nor that giving Holy Communion to a divorced and civilly remarried person (an adulterer) is a very bad thing etc. etc. 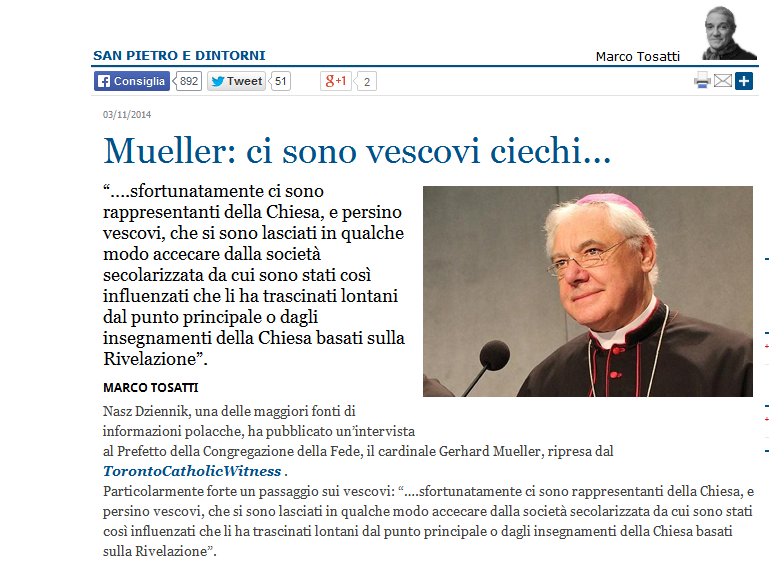 They did not learn that, for example, the Polish bishops Conference rigorously opposes any compromise with the schemes and plots of the Adulterist and Homosexualist parties. Along with a number of other distinguished prelates, the Polish bishops have been one of the few voices in the Church consistently pointing out the evils of homosexuality and the giving of Holy Communion to unrepentant adulterers. As such, the strong words of Archbishop Stanislaw Gadecki will not make their way into the "official" English language Catholic press, dominated, as they are by the innovators. How many are aware that the Archbishop said these very words: "at the Synod there were bishops who wished to erase the truth". Will this be tweeted by America Magazine, or Salt and Light? I think not. 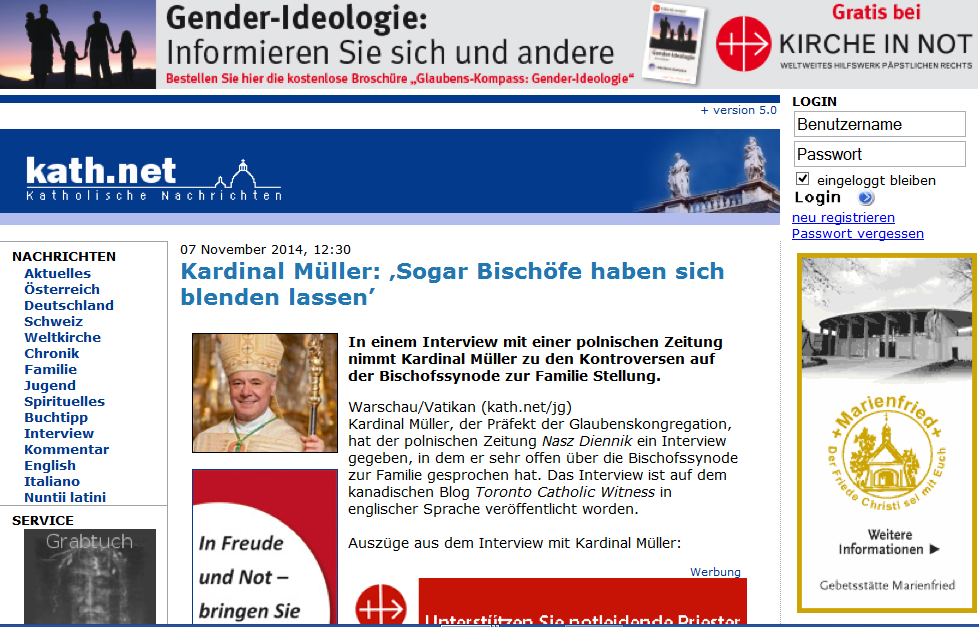 It is this revealing of the truth that is causing prominent, and not so prominent churchmen to become - so it would seem - quite distressed when the light is shone on the true intentions of the Adulterist and Homosexualist Parties within the Church, who wish to overturn doctrine, all the while claiming not to do so. It is possible that this motivated Fr. Thomas Rosica's recent strange tweet? One can only guess.  We do know that his organization, supports the positions held by the interim relatio (c.f. The Agenda, Vatican Values). We also know he reads La Stampa; he may well have read that this blog featured prominently in a recent article. 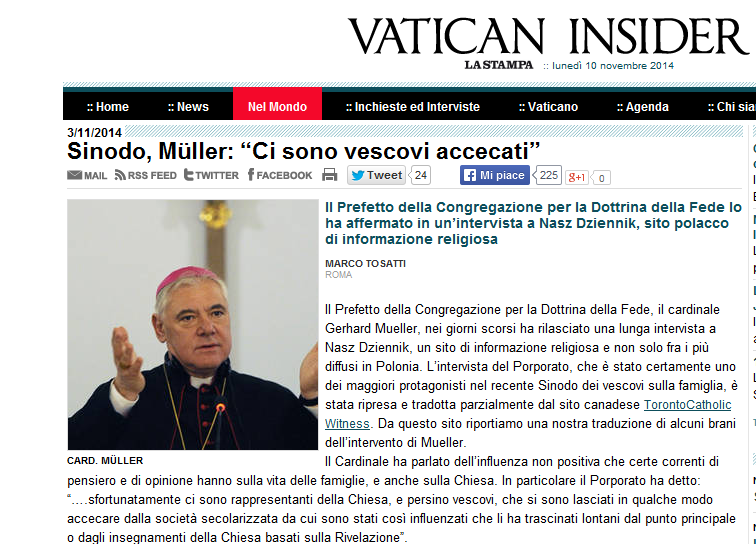 And why did we do so? Simply because Catholic "officialdom" did not deem it necessary (censorship, in other words) to reveal to Catholics what the Head of the Congregation of the Doctrine and Faith had to say; because Cardinal Muller opposes the Adulterist and Homosexualist parties. The news spread on the web, building a pressure that eventually major news agencies (including in Germany) carried the news via an exclusive English language translation provided by this blog.


As such, be prepared for an increase in angry, incoherent outbursts from distressed churchmen, who realize that they no longer control information, that Catholics will not be cowed by a neopagan, clericalist, ecclesiastical clique. The anger over the next few months, from these churchmen - mark my words - will become more hysterical and shrill. As their gnostic schemes and plots are exposed, their anger and hostility will be laid bare for all to see. They will realize that Catholics have no intention of offering incense to the idols of cohabitation, of adultery, or homosexuality.

Our bishops are a "monkey see monkey do" lot. They will do what is "safe". They are terrified of the mainstream media, a secularized paganism, that, to a large extent has become a neo-church, a substitute magisterium. In other words, in determining what to believe and how to behave, the media has taken over the position that Church leaders have historically held. But, thanks to brave bloggers such as yourself, there is another message, a Catholic one. Keep it up.

what has been said in the above article is the __absolute__ truth.. the Vatican's Agenda__ is to replace the truths. ___which have been handed down, since Apostolic times __-and replace them with<>< lies, distortions, ---in other words...as Sr. Lucia of Fatima said...'diabolical disorientation'<><.....you cannot change the truth...if you do----THEN, IT'S NO LONGER THE TRUTH, IS IT!...this man and many others, I believe are starting to see the ---hairline cracks---of a major _schism_ within the Catholic Church...when that happens, you will see two camps__-one for the truth and Tradition___and the other, sadly, will be the _reformists_who want nothing to do with truth or tradition...who are quite comfortable living a lie....that's the view from here....i think time will prove me right...

That's what I like to hear, the apostates being challenged and circumventing the controlled Catholic media via the internet.

Great Post, Barona. Well written and very insightful. Yes, we need to be grateful for publications like yours, which will expose the truth even if it's not the nice picture that the official church wants reported. I am quite happy to see the liberal agenda exposed. What is revealed to the Light can be healed. I have watched this junk foment underground for 40 years. I'm tired of evil hiding in the Church basement. Let's blow the roof off! Let in the Light of Christ. God bless you. Susan Fox www.christsfaithfulwitness.com