BREAKING NEWS: Report from Warsaw on the Conference, "The Synodal Eathquake", featuring Roberto de Mattei: "you must defend the Faith received in baptism against heresy...the synod....a ceasefire..."

The compass and guide for us simple faithful should always be the sensus fidei. One must defend the faith received in baptism against heresy, both in theory and in practice. We also have an obligation to deepen our faith " appealed Professor Roberto de Mattei during the Warsaw conference, "The Synodal earthquake" 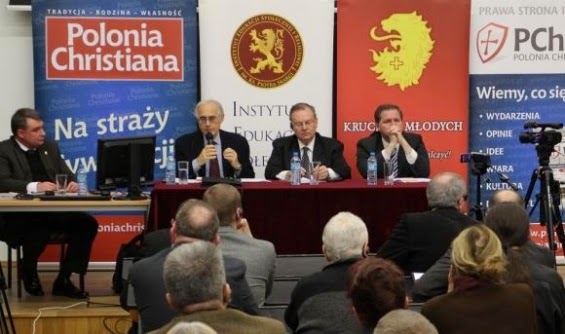 The following is a translation of a report on the Conference,"The Synodal Earthquake", November, 25th at the University of Warsaw. Special guest presenter was the renowned Italian historian, Professor Roberto de Mattei.

Organized by the Institute of Father Piotr Skarga, the conference was attended by Italian historian and editor-in-chief of "Radici Christiana", Professor Roberto de Mattei, Professor Grzegorz Kucharczyk and Julio Loredo, head of the Italian TFP. The full capacity audience gathered in the Auditorium Maximum of the Warsaw University. The meeting was chaired by Slawomir Skiba, editor-in-chief of the magazine "Polonia Christiana".

At the outset, Professor de Mattei outlined the history of the completed sessional work of the Synod of the Family: the starting point was the report of Cardinal Kasper, the rejection - and contained in the Vatican distributed survey responses - by the German, Austrian and Swiss Catholics - of Catholic moral teaching. In the opinion of those who responded there is a need to adapt doctrine to practice.

According to Professor. de Mattei, "what has been adopted at the session of the Synod can not be regarded as a victory. This is a temporary ceasefire. The discussion will be continued until the next session next year."

"It turns out that the position, let's call it the traditional opinion, is regarded as part of the community, but not the actual teaching of the Church",  said the speaker [de Mattei]. In his opinion, "the Synod led to the disclosure of the problem. Until October 2015, we all need to take advantage of the fact that our voices need to begin to be heard. We have to show what they think, how they live and what they believe; those Catholics who defend the family and marriage according to the rights of God".

In a later part of the Conference, Julio Loredo spoke. He responded to a number of important questions. The Church is to be a light to the world and the salt of the earth. One must ask, is the Church to take the example of the world, what world would they mean? The world that rejects Catholic principles, promotes abortion and homosexual relationships? The belief that this narrative has something to teach us, leads to a denial of absolute truth and moral. To this world the Church is to give herself ? asked the head of the Italian TFP.

With reference to the title of a book by Ralph Wiltgen, "The Rhine flows into the Tiber", it was stated that "Rome is moving towards the Rhine, not to say the Elbe. We are witnessing history in, for which he faced concrete actions and human decisions. "

"What happened during the session of the Synod of the Family is a part of a long-term crisis. We deal - similar as at the time of  the Second Vatican Council - with a  contemporary relapse", pointed out Professor Kucharczyk.

The speaker devoted a large part of his presentation to the German influence on theology and spirituality upon the contemporary Church. He opposed strongly the position of Cardinal Walter Kasper, yet prized by Pope Francis, and yet in the books of the German cleric one can identify disconcerting things.

"The Church in Germany for about twenty years has remained in schism to the teaching of eternal Rome, and this teaching is the one they are trying to impose", said Professor Kucharczyk.

Also, in his speech, Professor Kucharczyk raised questions about what is happening in the Holy See: did Rome not see the hundreds of thousands of demonstrators in France and Spain in defense of the family? Why does it not see the picture of empty churches in Germany?

After the end of the panel discussion, the large audience had the opportunity to ask questions of the guests invited to the conference.

"The teachings of Jesus Christ are very simple: who leaves his wife, sins. Do you consent to this act as an act of mercy of which is talked so much today? Is there a doctor who would be compassionate in hiding a patient's disease, and not offering decisive action? Mercy is to tell the truth, and not to gain popularity through relativization", said Julio Loredo.

To the repeated questions of what should a saddened and concerned Catholic do regarding the Synod, Professor de Mattei said that "our compass, this compass  should be our sensus fidei. The faith, received at baptism must be defended against heresy, both in theory and in practice. We also have an obligation to depend our faith. Errors spread when they are not attacked and struck down. If you leave them alone, then they quickly multiply. The Synod missed an opportunity and did not condemn, for example, gender ideology. These uncondemned errors invaded the debate", said the Italian at the Warsaw conference.

In his opinion, to questions from the audience Professor Kucharczyk responded: "we are dealing with an attempt to redefine the papacy, the danger of functionalization. It has had an impact on both the abdication of Benedict XVI and the introduction of a new style by Pope Francis."

Concluding the conference, editor, Slawomir Skiba, stated, "remember that in our attitudes and statements concerning the Church love and care about Her fate must guide us".