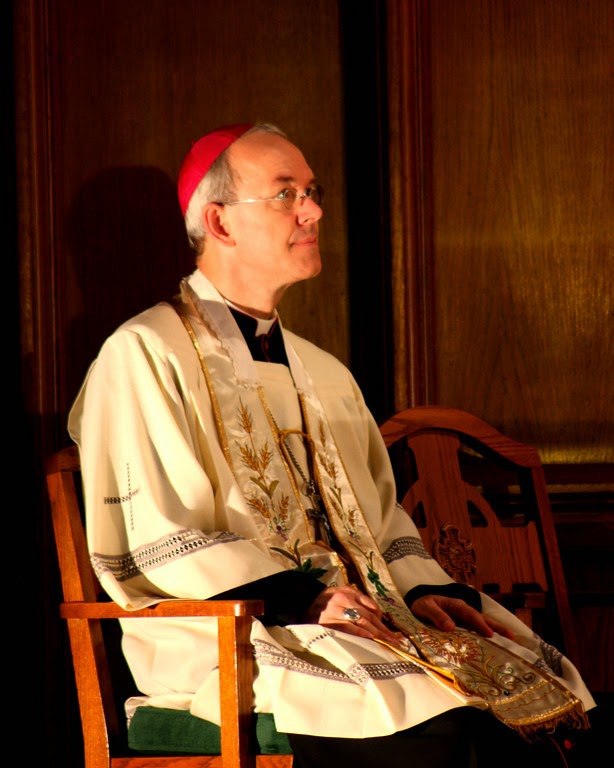 Thank God for St. Pope John Paul II and the Catholic legacy he has left in Poland. Once again, a Polish Catholic news agency comes to the rescue of Catholics who are being kept deliberately in the dark by "official" or "semi-official" Catholic news agencies. It pays to be able to read and write Polish during these dark times for the Church. This blog will continue to monitor, on a daily basis, Catholic news from Poland, and publish accordingly for English language readers.

The excellent Polonia Christiana 24 carries an extensive interview with H.E. Bishop Athanasius Schneider on the recent Synod of the Family. The interview is profoundly disturbing and shocking, showing us the depth of spiritual confusion and corruption within the body of bishops, and in Rome herself.

We are in a very, very serious crisis - perhaps even more grave than during the Protestant revolt. 2014, in my estimation, is even more dangerous than 1517.

Key points, as I see them, on the Synod by Bishop Schneider, include:

During the Synod there had been moments of obvious manipulation on the part of some clerics who held key positions in the editorial and governing structure of the Synod. The interim report (Relatio post disceptationem) was clearly a prefabricated text with no reference to the actual statements of the Synod fathers. In the sections on homosexuality, sexuality and “divorced and remarried” with their admittance to the sacraments the text represents a radical neo-pagan ideology.

This is the first time in Church history that such a heterodox text was actually published as a document of an official meeting of Catholic bishops under the guidance of a pope, even though the text only had a preliminary character.

3.  On admitting the divorced and civilly remarried to Holy Communion:

A person who still has the indissoluble sacramental marriage bond and who in spite of this lives in a stable marital cohabitation with another person, by Divine law cannot be admitted to Holy Communion. To do so would be a public statement by the Church nefariously legitimizing a denial of the indissolubility of the Christian marriage and at the same time repealing the sixth commandment of God: “Thou shalt not commit adultery".

4. Gnostic clerical arrogance with regards to overthrowing the Divine Deposit of the Faith

This fact is in itself grievous and represents an attitude of clerical arrogance towards the Divine truth of the Word of God. The attempt to put the Divine truth and the Divine Word to a vote is unworthy of those who as representatives of the Magisterium have to hand over zealously as good and faithful rules (cf. Math 24, 45) the Divine deposit. By admitting the “divorced and remarried” to Holy Communion those bishops establish a new tradition on their own volition and transgressing thereby the commandment of God, as Christ once rebuked the Pharisees and Scribes (cf. Math 15: 3). And what is still aggravating, is the fact that such bishops try to legitimize their infidelity to Christ’s word by means of arguments such as “pastoral need”, “mercy”, “openness to the Holy Spirit”. Moreover they have no fear and no scruples to pervert in a Gnostic manner the real meaning of these words labeling at the same time those who oppose them and defend the immutable Divine commandment and the true non-human tradition as rigid, scrupulous or traditionalist.

5. The real pharisees are the innovators:

In fact the bishops who support Holy Communion for “divorced remarried” are the new Pharisees and Scribes because they neglect the commandment of God, contributing to the fact that out of the body and of the heart of the “divorced remarried” continue to “proceed adulteries” (Math 15: 19)...

6. On the final relatio's continued equivocation regarding Holy Communion for the "divorced remarried":

The final Relatio of the Synod also unfortunately contains the paragraph with the vote on the issue of Holy Communion for “divorced remarried”. Even though it has not achieved the required two third of the votes, there remains nevertheless the worrying and astonishing fact that the absolute majority of the present bishops voted in favor of Holy Communion for the “divorced and remarried”,  a sad reflection on the spiritual quality of the catholic episcopacy in our days

7. The Church is being purified:

In this extraordinarily difficult time Christ is purifying our Catholic faith so that through this trial the Church will shine brighter and be really light and salt for the insipid neo-pagan world thanks to the fidelity and the pure and simple faith firstly of the faithful...

8. The Polish reaction against the adulterist and homosexualist advocates:

It is certainly an honor for Polish Catholicism that the President of the Catholic episcopate, His Excellency Archbishop Gądecki, defended with clarity and courage the truth of Christ about marriage and human sexuality, thus revealing himself to be a true spiritual son of Saint John Paul II.

I was was pleased to see that some Catholic journalists and internet bloggers behaved as good soldiers of Christ and drew attention to this clerical agenda of undermining the perennial teaching of Our Lord.

10. Catholics must refuse to follow false teachers; even if they be a bishop

Catholic young people have to say to themselves: I refuse to conform to the neo-pagan spirit of this world, even when this spirit is spread by some bishops and cardinals; I will not accept their fallacious and perverse use of holy Divine mercy and of “new Pentecost”; I refuse to throw grains of incense before the statue of the idol of the gender ideology, before the idol of second marriages, of concubinage, even if my bishop would do so, I will not do so; with the grace of God I will choose to suffer rather than betray the whole truth of Christ on human sexuality and on marriage.