"Father Joseph...came here in absolute poverty and lived as a beggar, driven by a burning desire to draw people to Christ".
Pope John Paul II 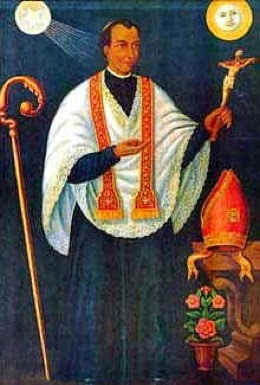 The Oratorian priest, Joseph Vaz was canonized on January 14th by Pope Francis. With near universal apathy and apostasy, Saint Joseph is a perfect example for us Catholics on how to live our lives. Faced with persecution by the Dutch authorities, Joseph surreptitiously re-entered the Island of Sir Lanka to continue his apostolate without any human support to speak of. In doing so, he lived those words of John Henry Newman: "to be an angel of peace, a preacher of truth in his own place.

The primary task of the Christian is to seek sanctification where he is; and to try to sanctify the people and places oin his  daily activity. Where you are, is where God wants you to be. "I am a link in a chain, said Newman, "a bond of connection between persons. He has not created me for naught. I shall do good, I shall do his work; I shall be an angel of peace, a preacher of truth in my own place". (Meditations and Devotions).

"What is the message of Joseph Vaz? Blessed Joseph should inspire you to be tireless and spirit-filled witnesses to the Gospel in your families and in your communities" (Pope John Paul II, Homily of Beatification)

Saint Joseph realized that sanctification begins at "home". When obstructed by the Authorities, he knew that he had to return "home" to continue to spread the Gospel to those who had no one to bring it to them. Our religion is incarnational; it does not come from books, but from hearing the Word of God. The Apostles were commanded to "go out and teach...".  They were not asked to be lecturers or writers. Primarily Catholicism comes from witnessing, living and speaking the Gospel. The study of the Gospels is secondary, or more rightly, subsumed into the living of the Gospel.

Blessed John Henry Newman was - as is every saint - intimately aware of being a witness. His scholarly activity (much lauded by the world) was secondary to his holy, pastoral life as a priest, and not the reason for his elevation to the altar. Pope Benedict XVI noted this during the Mass of Beatification, when he spoke of Blessed John Henry with words that equally apply to Blessed Joseph:

...I prefer on this occasion to conclude with a brief reflection on his life as a priest, a pastor of souls. The warmth and humanity underlying his appreciation of the pastoral ministry is beautifully expressed in another of his famous sermons: “Had Angels been your priests, my brethren, they could not have consoled with you, sympathized with you, have had compassion on you, felt tenderly for you, and made allowances for you, as we can; they could not have been your patterns and guides, and have led you on from your old selves into a new life, as they can who come from the midst of you” (“Men, not Angels: the Priests of the Gospel”, Discourses to Mixed Congregations, 3

I end in closing that today, on Saint Joseph Vaz's Feast Day, Mary Wagner was visited by a son of St.Philip, a son of Saint Joseph Vaz. It is only fitting to pray with, to bless a prisoner who is held for the love of Jesus Christ on the Feast Day of Saint Joseph. For he too, was arrested and held prisoner. Under the evil inspiration of a protestant, the local Hindu king held the saint in custody. St. Joseph was freed when the king discovered the saint's true intent. Let us pray that the Canadian authorities will recognize the truth about Mary, and Linda.

To close in the words of Pope Francis on the occasion of Joseph's canonization:

I encourage each of you to look to Saint Joseph as a sure guide. He teaches us how to go out to the peripheries, to make Jesus Christ everywhere known and loved. He is also an example of patient suffering in the cause of the Gospel, an example of obedience to our superiors, an example of loving care for the Church of God (cf. Acts 20:28). Like ourselves, Saint Joseph Vaz lived in a period of rapid and profound transformation; Catholics were a minority, and often divided within; there was occasional hostility, even persecution, from without. And yet, because he was constantly united with the crucified Lord in prayer, he could become for all people a living icon of God’s mercy and reconciling love.
Posted by Barona at 17:29