Canadian Conference of Catholic Bishops: does it really matter if one believes in Jesus Christ? Not according to these heresiarchs! 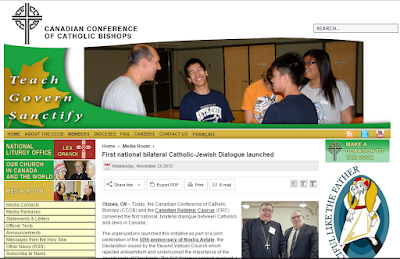 This blog excoriates those who push the terrible poison of religious indifferentism. Why? Religious indifferentism is the key dogma of Freemasonry; it is the key to all the Church's woes over the past 200 or so years. Further, we have witnessed the monstrous and blasphemous "Light Show" projected onto St. Peter's Basilica, on the great Feast of the Immaculate Conception. The theme of this "Light Show" was "global warming".

We can see how deeply imbued so many of the Roman authorities are with religious indifferentism which has led them onto this pantheistic venture with powerful, agnostic, deistic and atheistic globalist forces who wish nothing more than the utter destruction of the Catholic Church. For details on this abomination, I encourage readers to visit Vox Cantoris, where the Vox provided the tragic details of this great public sin. It was even openly Masonic.

Since the French Revolution, the poison of liberalism has seeped into society and into the Church. The Church has always resisted: the Syllabus of Errors, Pascendi, Quas Primas - these hallmark Magisterial documents are a roadblock against religious indifferentism. They are the litmus test of one's Catholicism. Quas Primas has even been called the forgotten encyclical of the 20th century; yet, it is arguably the most important.

Sadly, we have bishop after bishop rejecting the teachings of the Church. At least implicitly. This foolish, empty "dialogue" by the bishops in Canada is ultimately saying: "you have your "god", we have our "god"; it does not really matter. What matters is that we have "luv" in our hearts (and mush in our heads); perhaps a nice, chocolate feeling....   The problem is, without Jesus Christ this love is false.

The Canadian Conference of Catholic Bishops (CCCB) in their vacuous "dialogue" with a group of Jews admits discretely that there are some differences, but that we can move onto other things; collaborating in building up our "democracy". But on what underpinnings, Your Excellencies: Our Lord?

No, "Democracy" (so-called): and there is the new religion. It is the religion of Freemasonry. The underpinning of society is not Our Lord, but "democracy". Blasphemy! It is time for bishops to repudiate this bureaucratic entity that has no canonical standing and no accountability!

These bishops seem to have no concern that Jews do not recognize Our Lord Jesus Christ as the Messiah; the only Name under Heaven by which we are saved. When Our Lord died on the Cross, and the Curtain of the Temple was torn in two; it signified an end to the Old Covenant, because it was fulfilled in Christ Jesus. One can no longer be saved in the old Mosaic religion.

The Apostle to the Gentiles wrote:

Catholics should also read and study St. John Chrysostom's 19th Homily on the 11th chapter of the Book of Romans, wherein the saint discusses the true meaning and tragedy of the Jews' refusal to believe in Christ, as written by the Jewish convert, St. Paul, inspired by the Holy Spirit.

What does Sacred Scripture say? Let us remember that all of the New Testament writers were Jews, with the exception of St. Luke. And Luke was really the scribe of the Jew, St. Peter. So let us turn to these Jews for instruction on how important it is that ALL men - Jew and Gentile alike - turn to Our Lord Jesus Christ (a Jew of the House of David) and convert. Here are but a few examples:

"Go therefore and make disciples of all nations, baptizing them in the name of the Father and of the Son and of the Holy Spirit" (Mt. 28:19)

“Repent and be baptized every one of you in the name of Jesus Christ for the forgiveness of your sins, and you will receive the gift of the Holy Spirit. (Acts 2:38)

"And there is salvation in no one else, for there is no other name under heaven given among men by which we must be saved.” (Acts 4:12)

Freemasonry is controlled by Jews:

Heresy is a sin against Faith. A heretic automatically excommunicates himself from the Catholic Church and is no longer a member of the Mystical Body of Christ. Whether he be pope, or the humblest of laymen, matters not. A heretic cannot be Pope formaliter.
The Catholic Church is indefectible and infallible. The Catholic Church cannot teach error, or anything harmful to the salvation of souls.
The battle is between lucifer and Christ. Judeo-masonry worships lucifer. They have infiltrated the Church in an attempt to destroy it. Bergoglio wears the insignia of the Patriarch of the World. He is a member of the Third Masonic Trinity together with lucifer and the Emperor of the World. This is fact - like it, or not.
The novus ordo church is not Catholic. Bergoglio is not Pope formaliter. The false novus ordo religion is the religion of judeo-masonry. Shake the novus ordo dust from your shoes.

Important observations from an excellent blog.

A minor correction; I would like to hi-lite the following key point:

"This foolish, empty "dialogue" by the bishops in Canada is ultimately saying: "you have your "god", we have our "god"; it does not really matter."

I think it would be more accurate to conclude that they are saying: "You have your god, and he is one of our gods too".

To acknowledge their "god(s)" is to cease being a Christian; to cease worshiping God. It is to cease following Jesus Christ; The Word; God made flesh. It is to become Apostate.

Our God is a jealous God and He excludes all other Gods completely and entirely, with not even a micrometer of tolerance for other gods. Jesus only is Lord.

Thanks again for this most excellent, useful ongoing commentary.

Dear friends, thank-you for your input and comments. Much appreciated. God bless you all.