Bishop Fred Henry of Calgary: "totalitarianism...the madness of relativism" has taken over Canada

When a Bishop or priest stands up for Our Lord Jesus Christ and His Church, we must stand with him! The evil homosexual juggernaut continues its demonic advance across Canada. However, one bishop has made a stand: how many Catholics will stand with him?

Saddening is the fact that while Bishop Henry is waging a near one man defensive struggle against unnatural sexual vice, a heresiarch Cardinal in Rome, Gianfranco Ravasi, is distinguishing himself in praising a now dead sexual deviant and occultist. 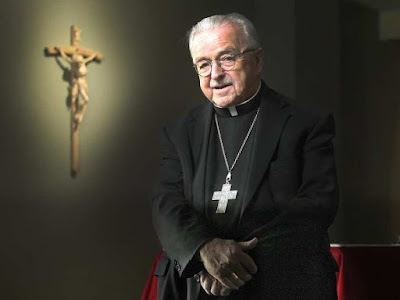 From Bishop Fred Henry of Calgary:

My Dear Brothers and Sisters in Christ

Prior to becoming Pope, Cardinal Jorge Bergoglio on May 25, 2012 gave a "Te Deum" homily commemorating the establishment of Argentina's first national government following the revolution of 1810. The major thrust of his homily was that only the commandment of love, in all of its simplicity - steady, unassuming, but firm in conviction and in commitment to others - can save us.  We need to re-root ourselves in a sovereign love that is simple and deep, to love God above all else and our neighbour as ourselves.

Two forms of deception impede the realization of any plan as a nation, i.e., the madness of relativism and the madness of power as a monolithic ideology.

"Relativism, under the guise of respect for differences, is homogenized into transgression and demagoguery; it allows anything, because it wishes to avoid being burdened by all the inconveniences required of a mature courage to uphold values and principles. Relativism, is curiously, absolutist and totalitarian. Relativism does not allow for any differing opinion. In no way does it differ from an attitude of "shut up" or "don't get involved."'

Power as a monolithic ideology is another lie which accentuates narrow-mindedness and seeks dominance over others. Consequently, social trust, the root and fruit of love is eroded.

On November 5, 2015, David Eggen, the Minister of Education issued an edict to Boards Chairs of Public, Separate, Francophone and Charter School Boards re learning environments that respect diversity and foster a sense of belonging. Board policies are to be shared with him, together with the required regulations or procedures by March 31, 2016.

"It is important to specifically address the board's responsibility as it relates to the LBTQ community.... As part of my review, I will also be looking for evidence of policy and regulations or procedures related specifically to Section 16.1 of the School Act and the support for the establishment of gay-straight alliances (GSAs) and queer-straight alliances (QSAs)..."

The Alberta Government "Guidelines" issued on January 13th show no evidence of consultation with or sensitivity to the Catholic community. They breathe pure secularism.

This approach and directive smack of the madness of relativism and the forceful imposition of a particular narrow-minded anti-Catholic ideology. Such a totalitarian approach is not in accordance with the Supreme Court of Canada opinion (Loyola) delivered on March19, 2015 and must be rejected.

Catholic schools share a foundational belief that all children are loved by God, are individually unique and that the school has a mission to help each student to fulfill their God-given potential in all aspects of their persons: physically, academically, socially, morally and spiritually.

Our Catholic schools are committed to supporting inclusive communities that teach care and compassion for every person, regardless of age, race, sex, gender or sexual orientation, and require that every person be treated with dignity and respect.

Our teaching is rather simple and direct. God created beings as male and female. In doing so, he gave equal dignity to both man and woman. In his plan, men and women should respect and accept their sexual identity. God created both the body and sex as good. Hence, we do not approach sexuality with fear or with hostility to the flesh. It is a gift of God by which men and women participate in his saving plan and respond to his call to grow in holiness.

The Catechism of the Catholic Church states that sexuality involves the whole person. "Sexuality affects all aspects of the human person in the unity of his body and soul. It especially concerns affectivity, the capacity to love and procreate, and in a more general way the aptitude of forming bonds of communion with others" (CCC, no.2332).
All persons - married, single, religious and ordained - need to acquire the virtue of chastity. "Chastity means the successful integration of sexuality within the person and thus, the inner unity of man in his bodily and spiritual being."(CCC, no.2337).

Chastity unites our sexuality with our entire human nature. It approaches sexuality as related to our spiritual natures so that sex is seen as more than a physical act. Sexuality affects the whole person because of the unity of body and soul. Jesus is the model of chastity.

"Chastity includes an apprenticeship in self-mastery which is a training in human freedom"(CCC, no.2339). The acquisition of chastity depends on self-discipline and leads to internal freedom, which enables human beings to temper sexual desires according to God's plan for the appropriate expression of love in the marital relationship of a man and a woman..

GSAs and QSAs are highly politicized ideological clubs which seek to cure society of "homophobia" and "heterosexism," and which accept the idea that all forms of consensual sexual expression are legitimate. The view of sexuality that they espouse is not Catholic.

The Supreme Court held that "to tell a Catholic school how to explain its faith undermines the liberty of the members of its community who have chosen to give effect to the collective dimension of their religious beliefs by participating in a denominational school"(para.62), "ìt amounts to requiring a Catholic institution to speak about Catholicism in terms defined by the state rather than by its own understanding of Catholicism" (par.63), and "ìt also interferes with the rights of parents to transmit the Catholic faith to their children" and the "rights of parents to guide their children's religious upbringing"(para. 64 & 65).

This makes me so sad. I have 2 little kids not quite school age and am so confused about where to send them to school! I lean towards the Public school so at least they won't get a confused sense of Catholicism. No religious talk at school and then I will teach them how to be a good Catholic, and make sure they have a good faith background. I am not sure what is the answer. Bishop Henry is a wonderful Bishop. God bless him.

My father is very much at peace about this alarming protest, since the Bishop is practlcally alone in this position. How many Catholic orgAnizations do you know would speak with that clarity? Almost none. It is one of those advantages of my father's successful project of weakening that institution's identity. -Screwtape

When the Lord returns, He will find one good Bishop here, who did as he was told and fed His sheep. God bless this good Bishop. He will find many unfaithful servants, who found it more to their liking to abandon Catholicism and let the sheep go to Hell, for all they care.
Most of our Catholic Bishops have abandoned us. Most of the Cardinals. Priests do not have the power to take it on. They could, any of them could, but it would end their careers in many cases.
The worst part of all this is the silence, so I thank this good Bishop for refusing to remain silent.

Canada is lost. It has become a land of progressive tyranny. The people will not enjoy where they end up.

Oh, Anonymous, homeschool your child. Does Canada allow it? Or does the government fear homeschooling because they must get their hooks into children and brainwash them from the beginning. If not, find the best school you can and move near it if you must. The environment for our children is everything. You can't expect your child to be surrounded by rabid secularism and not become a rabid secularist. We are greatly influenced by our school, and even more so now as the government has taken advantage of the opportunity for propagandizing and enculturation of innocent children. There are online courses you can get. It is not as hard as people think.

Depending where you live there might be another option though often it would be a private school. Check out St Timothy's and Maryvale academies in Ottawa (I don't know if they might know of other similar schools across Canada if you contact them). Augustine College is also amazing for a homeschooler's grade 12 year or a gap year before or after anyone's undergrad to provide a foundation in Christan thought