The Poisoning of the American Mind: Pius XI on capitalism ~ " "free competition has destroyed itself...economic dictatorship has supplanted the free market..." 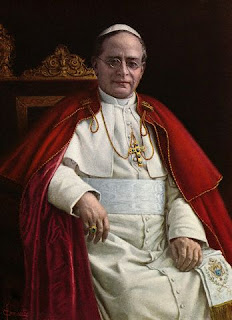 I may be wrong, but the only prominent American Catholic layman who is ringing the alarm bell on the foundational errors and dangers of the American experiment, is Michael Voris. America is founded on Liberty, not truth, A big, big, capitol error, that has come home to roost. Religion then, comes under the "god" of religious liberty, irrespective of truth. Hence, Catholic truth is put on the same level as protestant error, Jewish perfidy, Islamic infidelism, and even satanism. Everyone has the "right" to religious liberty". A grave error - the halfway house to atheism.

America is now imploding because of her foundation on Freemasonry and protestantism. The figures of America's two greatest influences loom large: Henry VIII, and the conduit of the effects of his  break with Rome, the philosopher of liberalism, John Locke. It would be from the poisoned well of Locke (though not exclusively) that the "founding fathers" imbibed their philosophy, setting the stage for America's inevitable slow poisoning.

Let us now briefly review the contradiction between the capitalist system - so beloved of poisoned American Catholics' minds - and the Catholic view of economics.

Yet when the State brings private ownership into harmony with the needs of the common good, it does not commit a hostile act against private owners but rather does them a friendly service; for it thereby effectively prevents the private possession of goods, which the Author of nature in His most wise providence ordained for the support of human life, from causing intolerable evils and thus rushing to its own destruction; it does not destroy private possessions, but safeguards them; and it does not weaken private property rights, but strengthens them.

Furthermore, a person's superfluous income, that is, income which he does not need to sustain life fittingly and with dignity, is not left wholly to his own free determination. Rather the Sacred Scriptures and the Fathers of the Church constantly declare in the most explicit language that the rich are bound by a very grave precept to practice almsgiving.

The ultimate consequences of the individualist spirit in economic life are these: free competition has destroyed itself; economic dictatorship has supplanted the free market; unbridled ambition for power has likewise succeeded greed for gain; all economic life has become tragically hard, inexorable, and cruel. The State, which although it ought to sit on high supreme, free from all partiality and intent upon the one common good and justice, is become a slave, surrendered and delivered to the passions and greed of men. And as to international relations, two different streams have issued from the one fountain-head: On the one hand, economic nationalism or even economic imperialism; on the other, a no less deadly and accursed internationalism of finance or international imperialism whose country is where profit is.

A market unrestricted by any law opens to everybody attracts large numbers to buying and selling goods, and they, their one aim being to make quick profits with the least expenditure of work, raise or lower prices by their uncontrolled business dealings so rapidly according to their own caprice and greed that they nullify the wisest forecasts of producers. The laws passed to promote corporate business, while dividing and limiting the risk of business, have given occasion to the most sordid license. Observe that consciences are little affected by this reduced obligation of accountability; that furthermore, by hiding under the shelter of a joint name, the worst of injustices and frauds are penetrated; and that, too, directors of business companies, forgetful of their trust, betray the rights of those whose savings they have undertaken to administer.

Restraint enforced vigorously by governmental authority could have banished these enormous evils and even forestalled them; this restraint, however, has too often been sadly lacking.There quickly developed a body of economic teaching far removed from the true moral law, and, as a result, completely free rein was given to human passions.

Dr. John Rao was onto this long before Voris. See http://jcrao.freeshell.org/index.html

You're correct about the corrupt foundation of America and its democratic political system. And this needs to be talked about much more than it is.

But I'm sorry, Pius XI, as well as Leo XIII before him, was wrong on so many points about capitalism I won't even begin to pick apart how he has misunderstood how it works (or is supposed to work). The Popes' misunderstanding of economics has contributed directly to the absolute evil of socialism and leftism that so pervades the Church and the rest of society today.

Anonymous: you make the exact same argument as those dissenters on Humanae vitae. Pius XI denounced social Modernism as rigorously as dogmatic Modernism. A capitalist exploiter is just as sinful perhaps even more so, than a base fornicating woman using contraceptives. Indeed, his evil exploitation of his employees may play a role in her decision to use contraception and/or abortion.

Further, I find it interesting that you denounce those Popes, yet fail to produce one error. If you are Catholic, you need to return in humility to what the Church teaches and submit yourself to the sweet yoke of Christ. If you are an American visitor, you need to ask yourself: am I a Christian first, or an American?

I meant America's political foundation, not its economic system, which is shared by many other countries and did originate with America. And what is a "capitalist exploiter"? Do they even exist today? It's just an imaginary scarecrow mostly used by the Michael Moore agitators of society. Perhaps in the 19th century they existed but today, "restraint enforced by government authority", or taking someone's "superfluous income" aka. socialism, as advocated by Pius XI, actually results in more poverty than less. The Scriptures does not advocate this either. He is correct that the rich are bound in charity to be generous with their wealth, as Christ said, but this is their own choice, and never, ever should be forced by the state simply taking away what it decides is "superfluous". That is what evil leaders like Obama and Castro do.

I believe one day we will get a Pope with a much better grasp of economics, who will make a more informed, valuable contribution to Catholic social teaching. But I do applaud Michael Voris for raising the problem of America's Masonic, deistic foundation.

My friend, please read and meditate on this.

The commercial world consists of two tiers of entities -- individuals and corporations. When individuals collude in criminal enterprises, they can be apprehended and prosecuted. In the case of corporations however, when they form criminal cartels, the situation is far more difficult. Apprehending individuals leaves the corporation intact. Even destroying whole countries, as was the case with Nazi Germany, didn't slow down I.G. Farben and its ilk. The corporations just opened foreign subsidiaries. The problem is fascism (i.e. corporatism), not capitalism. Corporations have become amoral, lawless, and out of control. They have no soul. They cannot be saved. They are essentially secret societies, with all the characteristics of freemasonry -- corrupting, cultish, demonic.