"James Martin S.J. blocked you" ~ how homosexual obsessed priest is trying to silence a young Catholic 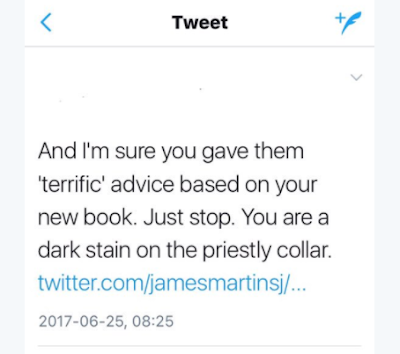 On Monday of this week, James Martin S. J., arguably America's most prominent dissenter on homosexuality, blocked a young Catholic - "Irenaeus" on Twitter - for daring to tweet to him regarding the Jesuit priest's promotion of, and excusing of, homosexual behaviour. 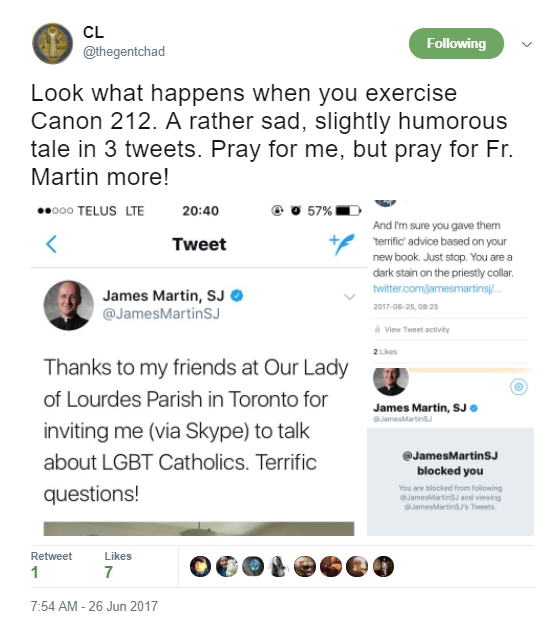 James Martin S.J. needs to come clean and explain why he is obsessed with homosexuality.

I have news for James Martin S.J.

He will NOT silence Irenaeus.
Posted by Barona at 11:47

This non-catholic demon possessed lunatic told someone I know
"Many Catholic Saints were LQTBQ.
You will be surprised how many homosexual people are in Heaven"
I promise you this happened as the individual I know showed me their Facebook feed.(I promise this is true)
For a brief moment I was somewhat shocked.(very difficult to shock western people in 2017)
I left the Novus Ordo 3 yrs ago and had no idea it had sunk to this low in just 3 yrs.
Maybe I am wrong but it seems like we're living in the last days.
This lunatic is causing young novus ordo ppl to continue in their mortally sinful lifestyles.I am not perfect nor am I a Saint.
Thank God our valid priest reminds us weekly that mortal sin is an intolerable abomination that leads us to eternal Hell.