Rainbow flags, shout-outs for abortion, promotion of women as priests etc. Now who would be doing such a thing, you may ask? A radical dissident group that has been excommunicated?

Sadly, you would be mistaken. No, the open promoters of homosexuality and these other evils, are the Ontario English Catholic Teachers Association (OECTA). This militant Union is aided and abetted by the various school Boards in the Province of Ontario. In Toronto, this would be the Toronto District Catholic School Board (TDCSB).  The Boards cheer on OECTA in its ongoing campaign to corrupt innocent children with - well, you guess it - SILENCE.

Not the TDCSB to remove Rainbow Flags from schools, not the TDCSB to insist on the teaching of Catholic doctrine. No, the Boards are complicit and active co-conspirators with OECTA in corrupting children. The Boards know children are being fed spiritual poison, but do nothing. 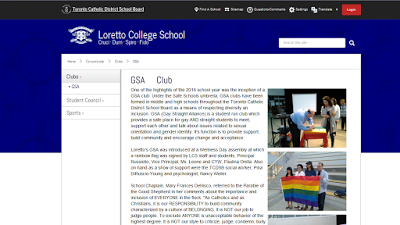 But it goes worse, far worse. What if I told you that the rot goes as far as the official Archdiocesan newspaper, the Catholic Register? What if I told you to spend a few minutes reviewing the recent issues of the Register to see their promotion of the Catholic publicly funded system as a truly Catholic education system? Gay-straight "alliances"(in truth homosexual affirming clubs - after all, why the Rainbow flags in schools?), dissent on doctrine, silence on the extremely hard left Twitter feeds of leading OECTA members, including President Ann Hawkins and so on.

The most recent outrage is the Register's article promoting "Friends of Catholic Education". Rest assured dear readers, the Register may promote Hawkins as a "friend" of Catholic education, but she is no friend.

All of this is a grave insult to Cardinal Collins who is fighting - it would seem at times - a virtual one man battle against immorality.

Bishop Michael Power would not be proud. He would - and I am sure he is - ashamed of the treachery in the Archdiocese of Toronto. Be assured, Bishop Power would not be an ecumenical zealot, he would not promote homosexuality, or sit idly by, he would not allow our children to be corrupted, he would not sit on his hands with teachers advocating priestesses, or abortion. He would not hold a dinner in which the Master of Ceremonies was a politician who brought in legislation that resulted in the death of millions of babies. He would not be silent if his teachers dared to invite an open arch-heretic like ex-priest Gregory Baum (a self-admitted practicing homosexual) to address them.

Bishop Power, please move the hearts of the Cardinal his auxiliary bishops, his priests to truly stand up for Christ and His Church, in season and out of season.

The Boards are scared. The Dufferin-Peel Catholic District School Board definitely is. So many of my classmates have gone astray.

The salient question here is WHY is the cardinal silent.

This is what needs to be done here in Toronto. Search the news archives over the last 30 years for sexual scandals in the archdiocese of toronto. You won't find anything. How is it that a police raid of St Augustine seminary in the 80's went unreported? What about the charges against auxiliary bishop John Knight? Did the secrets of former police chief (and buddy of Cardinal Ambrozic) Bill McCormack die with him? http://www.catholic-hierarchy.org/bishop/bknight.html

When the truth is buried it grows and it chokes. It strains to free itself and find its natural place in the light. When it finally breaks free it explodes with such a force that on the day it bursts out, it obliterates everything that worked to suppress it.

The Cardinal is not only the boss, he is the owner. He owns it all as a corporation sole. He will be held accountable for this and it won't be pleasant going.

Is it just me or did they publish another front page "story" about that "poet-priest" again?

Things to do with The Catholic Register that are perfectly legal and fully justified:

-use it as a rag to clean windows.

-use it to line your kitty box.

-use it as kindling (but must be wrapped up).

"The Boards are scared. The Dufferin-Peel Catholic District School Board definitely is. So many of my classmates have gone astray."

What are they really scared about?? Not the Bishops.. Please clarify