Patricia Minnan-Wong, the President of the Toronto Elementary Catholic Teachers (TECT) attended yesterday's "gay pride parade" in Toronto. She is the President of an organization that has spiritual and intellectual control over innocent, young children, as "educators". That is the bad news.

The good news is, that with all her efforts to get teachers down to the parade - a parade featuring full nudity, sacrilege, blasphemy, simulated and real sexual acts - barely a handful turned out. Interestingly, photo analysis of the crowds put the real estimate of attendance around the 50,000 range; and a large percentage themselves were mere amoral curiosity seekers, not homosexuals or lesbians themselves.

Even a memo - abusively sent out as President of the TECT - failed to obtain the desired turnout.

To try to increase OECTA participation, Minnan-Wong axtually sent out a memo via email to teachers on Tuesday, June, 20th, 2017 to try to cajole them into attending the gay pride parade.

This memo to all "Assocation Representatives" was a gross misuse of her office.

As a Catholic she is obligated before God and Christ's Church to defend true morality, not denigrate it by supporting (on tax payers money and time) so-called "gay pride". She should immediately resign, as should other executive members of OECTA units, such as Angela Tersigni, of TSU.

Minnan-Wong, who according to the Province's "Sunshine List", earns in excess of $143,000 per year.  An increase of over 13% from the previous year. So there we are: $ 143,000 plus for NOT upholding the Catholic Faith! A massive, corrupt gravy train.

It is believed that more and more teachers and Catholics are reading this blog (and other  blogs and Twitter Feeds), as we continue to expose the Ontario English Catholic Teachers Assocation (OECTA), as nothing but a militant, hard-left secular union. 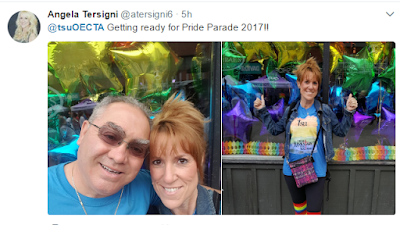 This blog, and others, have already exposed the ongoing scandal of not teaching the Catholic Faith in its purity. (e.g. we know that for years OECTA heretically supports the delusional idea AND HERETICAL PROPOSITION of trying to "ordain" women to the sacred priesthood). *

We have also exposed leading OECTA members who support for election to office pro-abortion candidates, re-tweet pro-abortion propaganda, tweet and/or re-tweet LGBT propoganda, and so on.

Readers will know that last week, the Toronto Secondary Unit-OECTA (TSU) attempted to - unsuccessfully - block me on Twitter.

Unfortunately for them, their social media skills are not savy (to say nothing of their ignorance of the technical aspects of how Twitter works). As such, their psychopathic cravings to control yet another person failed. Indeed, teachers are visiting this blog more and more to learn the real truth about OECTA: its dissent, its lies, its fraudulent so-called Catholicism.

Be assured, dear readers, this blog (and others) will continue to expose OECTA for what it is: a dyspeptic, vile, secular union, that has abandoned the Catholic Faith for a humanist ideology consisting of a veneer of horizontal Christianity. This horizontalism has long been denounced by the Church (whom OECTA heretically terms "official spokespersons").

3.111 That the Association support equal opportunity and treatment of all members of
the Roman Catholic church, including women and men, in matters pertaining to
service as a member of the clergy

4.15.11.5 to make recommendations to eliminate gender discrimination in clergy ordination