Open Letter to the Prime Minister of Canada by the Ukrainian charity, "For Human Diginity" on behalf of Mary Wagner 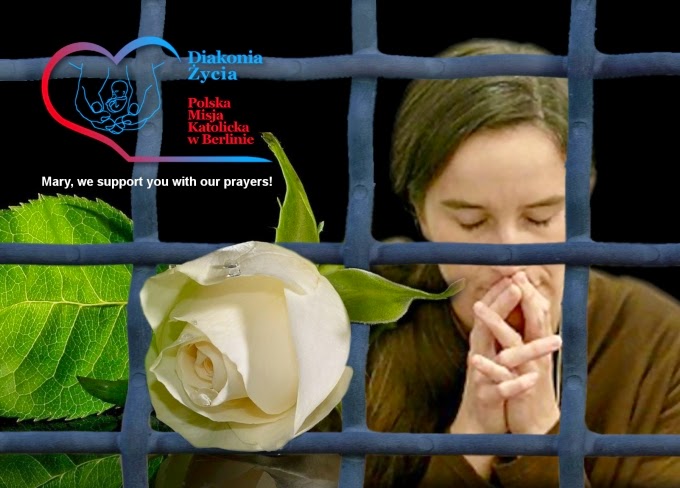 Today, on Mary Wagner's birthday, public demonstrations in favour of life are taking place in Warsaw and Kiev. The Rosary is being prayed, the truth is being brought to light... updates on these events will become available later today.

The following is the English translation of the text that will be submitted to the Canadian Embassy in Kiev:


On February 12, 2015, we gathered near the Canadian Embassy in Kyiv, the capital of Ukraine, to express our support for Mary Wagner, a prisoner of conscience and an imprisoned Christian.

Mary Wagner has spent over two years in Canadian prisons and is currently serving time in a female prison in Milton, Ontario. Her ‘guilt’ lies in the fact that she would enter abortion clinics and tell pregnant women where they can find organizations helping women to maintain their pregnancy and avoid killing a child in the mother’s womb.

Undoubtedly, Mary Wagner’s sentence is a shameful act! Dear Mr. Prime Minister, please, do not let this shame fall onto your country!

Abortion means destroying a human life in the womb, both from the scientific and the Christian points of view. There is no principal difference between killing a fetus before birth or a child after.

Russia was the first country in the world to officially legalize abortion. The Nazis legalized killing based on the racial and national principles. The communists would kill based on the social criteria.

Human life has indisputable value not only for a person, but also for the State which is built by people. The practice of abortion violates the human right to life. The law entitling one person to take the life of another leads our citizens to breach the Lord’s commandment ‘You shall not murder’. The state that issues such a law is devoid of God’s blessings and the future!

Mr. Prime Minister! Please, use the power vested with you to defend human life from the moment of conception. We urge you to restore justice and assist in the immediate release of Mary Wagner!

On behalf of the meeting participants
Posted by Barona at 09:43