REAL NAZIS? Why was the US and EU supporting Nazis in the Ukraine?

We have heard a lot about Nazis in recent days. What we have not heard about is the strange support of REAL Nazis from the most unlikeliest of places. Take Senator John McCain for example.  He did not think twice about supporting the various neo-Nazi organizations in the Ukraine.


Nor did Victoria Nudelman (Nuland). A Jewish neo-con, she actively got involved in supporting Nazis that were highly active in the attempted Maidan putsch. Unfortunately for Nudelman and McCain, more sensible heads prevailed, and even Ukrainians in their vast majority rejected the loathsome Nazis who were striving for a full-scale coup in Kiev.


When will the various elected officials and high ranking government bureaucrats renounce UNCONDITIONALLY their support of Ukrainian Nazism?

It is fascinating how neo-con outfits - such as CNN - denounce the "bad" Nazis (KKK and other red-neck losers), while supporting the "good" Nazis (the internationally financed with billions, the Ukrainian Svoboda and other Nazi affiliated and sympathetic parties). People have such short memories.


Friends, learn your history. Stepan Bandera and his OUN-UPA fascists and other Nazis and their sympathizers are the real McCoy, not assorted white trash and ignorant red-necks running around in bed-sheets waving Nazi flags.

Stepan Bandera, the "hero" of so-called Ukrainian nationalists, was a sadistic and bestial murderer of well over one hundred thousand Poles. His military Nazi units also were responsible for exterminating at least 9000 Jews in 1941.  His fanaticism also led his debased followers to even murder Ukrainians who did not approve of his vile activities.

This loathsome creature is presently receiving a posthumous hero's welcome in Kiev. American Senator, John McCain, who distinguishes himself in outrageous foreign buffoonery, outdid himself this past January, by sharing the stage in Kiev with "Banderowscy". 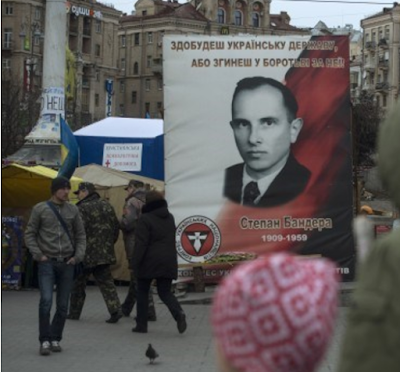 The Banderites still have not only very strong support in the Ukraine, but also amongst many of Ukrainian descent living in Canada and the US. One apologist for these people is none other than Canadian foreign Minister, Chrystia Freeland. She is typical of the Ukrainian Nazi collaborators and apologists living in Canada.

Having watched the video, you now know what REAL NAZIS are like!

Now you know why Russia deals so firmly with these despicable, evil fascists and Nazis.

Please pray for reconciliation in eastern Europe. Our Lord Jesus Christ overcomes every hatred and evil. As I also wrote in 2014, "peace be unto the Ukraine". May that sad nation be reconciled with Poland and Russia. May a Nazi and communist free Ukraine take her place amongst free Nations. May she reject the false allure of materialism offered by America and western Europe.

The Ukrainians are far too great a people to be pawns of the country that is under the domination of the Nation that rejected and crucified their greatest countryman and King: Our Lord Jesus Christ.
Posted by Barona at 17:36