Basilian Order being sued by former Altar Boy for sexual abuse ~ are there any more victims? 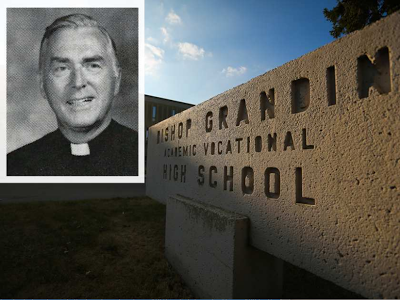 The Basilian Order is being sued by a former Altar Boy in Calgary.

On Wednesday, a lawsuit was filed in Calgary court against a religious order of the Catholic church, alleging decades-old sexual abuse at the hands of a Calgary priest and teacher at Bishop Grandin High School that left a former Calgary resident permanently scarred.

None of the allegations have been proven in court. Postmedia has agreed not to publish the plaintiff’s full name.

The 53-year-old plaintiff is a former head altar boy, Catholic youth group member and Bishop Grandin student who alleges he was repeatedly abused by Father Frederick Cahill for several months in 1981.

Robert Talach, the plaintiff’s London, Ont.-based lawyer, has represented abuse victims across Canada for the last 15 years. He says his client “is just trying to make something good out of something bad, and perhaps embolden other victims to come forward.”

This Order has had its share of molesters and committers of physical violence. Readers may wish to review Sylvia's Site for further information.

The abuse of children is a particularly diabolical sin. The abuse of boys by homosexual priests is particularly fiendish. Robert Talach, the plaintiff's lawyer rightly calls upon other men to step forward.

If there are any more victims, I encourage them to seek help, to approach the police: make a stand!

Do NOT allow a Judas-priest to live off the widow's mite; to blood-suck on the Church.

The abuse of children must stop, homosexual pederasts must be exposed and driven out of the Church.

This is particularly sad for me, as I was educated by Basilians. I knew a number of very fine outstanding priests. These abusers not only disgrace Christ, but they profane His Church and besmirch the sacred honour of good and holy priests.

However, it would seem that the days of the Basilians are over. With virtually no vocations, and a growing betrayal of their original charism (e.g. the collapse of St. Michael's College at the University of Toronto, where the Basilians are opposing Cardinal Collins' attempts to wrest control of the College away from them) it is only a matter of time before they are no more.

Given the crimes of a number of their members, it is only Divine Justice that they disappear.