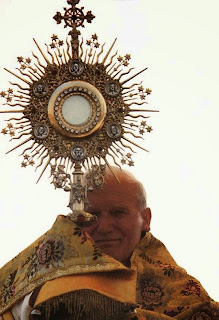 Who can deny that our age is one marked by a great crisis, which appears above all as a profound "crisis of truth"?
St. Pope John Paul II


With the invitation (by whom?) of a Catholic couple to address the Synod of the Family, we hear that they gravely insulted the assembled Fathers and the Holy Father by calling for welcoming of homosexual partnerships". How is this possible? Who could have invited such people? However, God can draw good from evil: this scandal only underscores the utter failure of catechesis; the rejection by most of the world's bishops to preach an integral sexual ethics, as called for years ago by now St. Pope John Paul II, and reiterated by his venerable successor, Pope Benedict XVI.

In his last book (Memory and Identity), St. Pope John Paul wrote about the call for homosexual unions as an alternative type of family, as follows:

It comes from, as the Holy Father pointed out, a warped concept of God as Creator, and the perversion of the human person as the arbiter of good and evil...it is a crisis of truth (as Pope Benedict on numerous occasions pointed out).

Terrible forces have been unleashed since the resignation of BXVI. This is a manifestation of the "whom am I to judge" umbrella we are now living in our church. I have great fear and anxiety about our Church leadership, at least in the past I had implicit trust in the Successor to Peter, now for the first time in my 56 years of life I am left with great doubts about our Pope. But I do pray for him every day. JMJ have mercy on us

Luciano,
So Pope Francis is not chanting Gregorian and isn't doing the EF or sound in like any other Trad Hero, but Christ always promised us Satan will never get the church (Matt 16:18) and the doctrine of infallibility still stands. Else the Church is a lie. Just because pastorally his approached is biased from his time in South America and he was educated at the peak of Vatican II, does not mean we should flee the church for greener pastures with another Christian group or The SSPX or sedevacantists. Finally, don't give into the Devil's temptation of despair. It's the sister sin of sloth/acacia and he wants you to spiritually die out and leave the Church. Don't give up on hope!

Friends, let us not forget that though the Pope is His Vicar, Christ the Lord is the Head of the Church. Even now, the modernists are being defeated at the Synod: bishop after bishop reaffirms Matrimony; the innovators are put to flight: the filth (much of it in certain elements in Rome .e.g. the Holy See Press Office) is being exposed!

As to the form of Mass for Latin Rite Catholics: patient! Within a generation or two the New Mass will be dead. It will be replaced by a Mass that actually represented the minds of the Council Fathers; as well, as the ever living Carolingian-Gregorian Mass, otherwise known as the Tridentine (let us not forget, and pray for the restoration of the many Roman Rite usages).

We should also refrain from the use of "Trad Hero" "Glad Trad" "Bad Trad" etc., etc., - or any and various assorted slogans.

we all err in this, but we must recall ourselves as to why we post: not just to our own "crowd", but perhaps the wayward, the searcher.... what will he or she find? That is why I adjusted my post pertaining to poor Fr. Thomas Rosica. The right way to identify his error is not to one up him, but to quietly, but accurately point out his error/s during this most solemn occasion of the Extraordinary Synod.

Last night's appearance of Cardinal Burke on EWTN is a case in point. He refused to be drawn into polemics, but we understood that the Kasperian proposal is already be torpedoed by the vast majority of bishops. We will not hear of this from the Holy See Press Office (as they have unofficially become spokesmen for this heresy), but they are already backing off some of their extreme positions (check Fr. Rosica's Twitter feed to see the nuances) and will continue to back peddle to save themselves. The question post-Synod is: will the Pope clean house? This is very difficult. We know that both prior Popes were unable to do so.

I typed in an poorly lit room, hence the few above typos.

What did Luciano's remarks have to do with Gregorian chant or the Traditional Missal? He said nothing of the kind. He cannot sing in either liturgy; Pope Benedict did not celebrate, publicly since he was a Cardinal, the old Mass. So what?

Luciano's comments are quite valid and from his heart. He is distressed at what he sees and hears coming from Rome since the renouncement of the papacy by our beloved Papa Ratzinger.

You are drawing a non sequitur!

Yes, the Church will stand in spite of heretical statements from some Cardinals and confusion from this current Bishop of Rome.

You are correct on this as Barona indicated, the Missal of Paul VI will one day be revoked. There will be truly two forms of one Roman Rite. A Latin version which is essentially the current and a vernacular-simplified version which is essentially the '65 interim missal. The pre-reformed, pre-1955 Holy Week will be restored for the Latin and vernacular with the current "hours" and there will be a common calendar and lectionary primarily from the old but with some adaptations of the new.

The last 50 years will be seen as a dark period in the Church but a necessary scourging.

I also agree with Barona, the "trad" bashing is an unnecessary and unproductive diversion.

We hang together friend, or we hang separately.

You know where to reach me.