Holy See Press Office's Thomas Rosica exposed as not a servant of the synod Fathers, but an active agent of the innovators

Fr. Thomas Rosica, English language spokesman for the now notoriously manipulative and deceitful, Holy See Press Office, has let his guard down and re-tweeted a strange tweet claiming what the "conservatives" want, their "panic" etc.

It would be bad enough for a priest of Jesus Christ to harbour the dissident views jammed into the relatio; it is surely wrong for a priest, at the service of the Holy See, to actively manifest bias in favour of the heresies spouted on Monday.

Given the open bias and censorship imposed by the HSPO upon the bishops - how can we trust anything coming out of Thomas Rosica's mouth, when he openly favours the innovators?

So, we are left with gagged bishops, and dissenters in charge of the HSPO; manipulating the Synod and decapitating this Papacy. As Freyr and I discussed and agreed yesterday: without a strong statement in favour of orthodoxy by Pope Francis, his Papacy is dead. We will be looking at a re-run of the the post Humanae vitae disaster that plagued the Church through the seventies. We want a Pope who will act decisively, not commit himself into the position of a "lameduck" Pope. For if he permits ambiguity to continue for another year, he will have transformed himself into a spiritual eunuch. 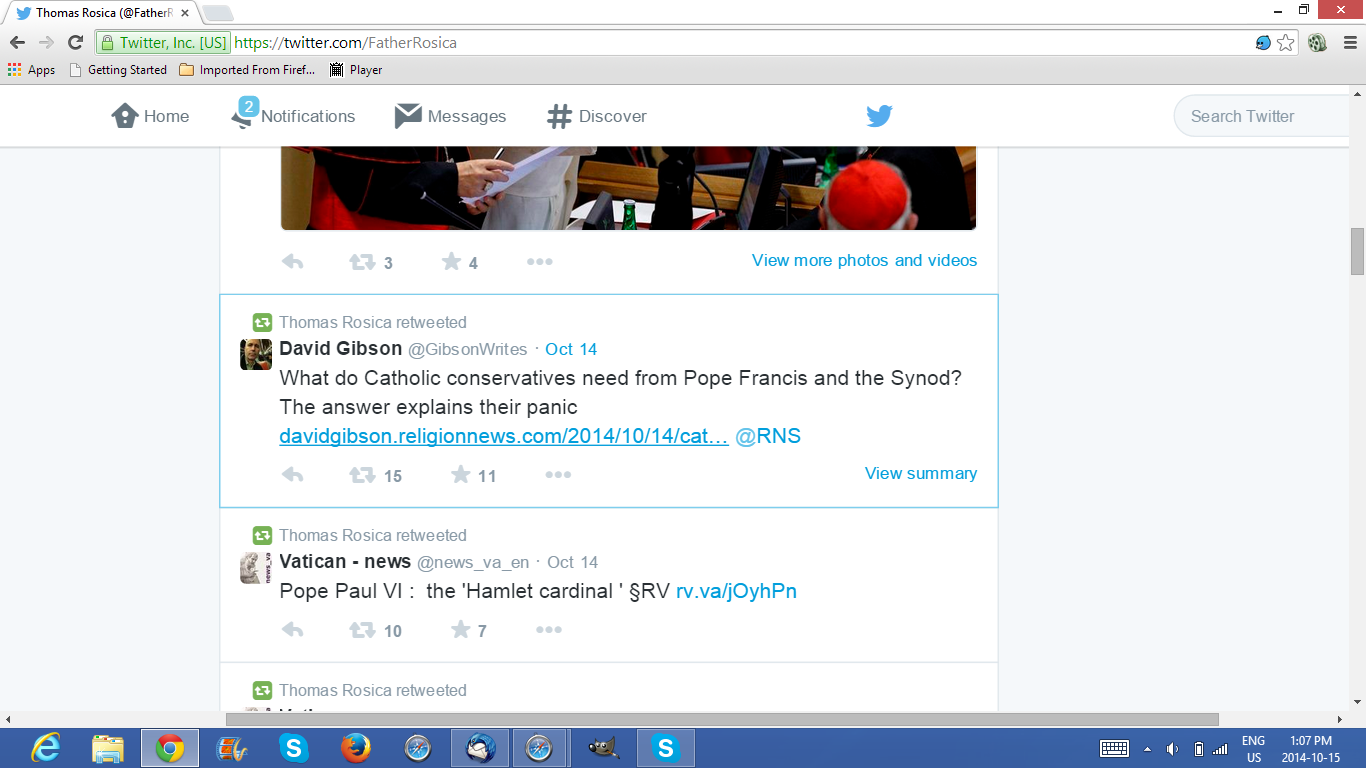 If the Holy See is capable of giving Rosica such high responsibility after publicly lauding the famed dissenter Mr Baum, than this Catholic no longer trusts the Holy See. Having this careerist there who is liberal to the core is a disaster. This synod and this papacy has lost me. Something I never thought would happen in my lifetime. St JPII please pray that this nightmare will end. JMJ have mercy on us.

The Holy Spirit and the presence of Christ in her midst guarantees the Church's indefectability. The fact that the Church is composed of sinners guarantees that there are often some unsavory characters in positions of authority.
"Simon, Simon, behold Satan has desired to have you, that he may sift you as wheat. But I have prayed for thee that thy faith may not fail; and when once thou hast turned again, strengthen thy brethren."

Michael Voris uncovers treachery in the press office as that relatio was not seen by the bishops before it was released to the media. I think we should pray for Pope Francis as this situation must be weighing on him terribly. God bless you. Susan Fox www.christsfaithfulwitness.com

Before I read this, I have been trying to put together a long comment on on =e of the videos of Salt and light's coverage of this synod about how they are not authentically Catholic The The faithfulness of it's CEO is suspect in my eyes with Fr, Rosica's gushing praises of the excommunicated former priest, Gregory Baum, who married a divorced ex-nun and is ori abortuion, pro same sex marriage, pro artificial contraception, pro sex outside of marriage and on and on and on. And Fr Rosica eyes glistenas he excitedly talks about the 'spirit of Vatican II'. I mean, talk about a great deception! Satan could not have engineered such a 'faithful ' Catholic viewpoint himself....cuz he did engineer it, When I found out about Rosica being the English spokesperson(during the conclave) it made me ill . I made so many comments that simply could not be posted..it brings out a shameful combination of redneck and sailor personality in me.... and alas, it is only the faith that is orotected not the practice of it (as we have seen) or the teaching of it 9as we have also already seen.... I know I was innocently one of those Sporot of Vatican II believers myself for much of my life,,,I say innocent because that is what my Catholic school education and friendship with the nuns taught me. I was misled and had NO idea that this was NOT the Catholic faith. But for the grace of God, there go I as one of the nuns on the bus or a radical leader of the LCWR...thank you Lord that I did NOT become a Sr. of Mercy....I do not see how I would have escaped my blindness. For the life of me, though, I cannot understand why the 'spirit of Vatican II fols want to remake the Catholic Church into what the Anglican Church has become....There is already an Anglican Church and she wants YOU, Spirit of Vatican II crowd.. It seems to me that the freat apostacy cimes from WITHIN our own Church ....but the gates of Hell will not prevail but for a time I fear that it will certainly look and seem like they are prevailing. However, as long as I draw breath, I will not abandon Christ's Church to the wolves.... Sirry abour being melodramatic here. It has been a long week and longer still since I woke up to the truth. The battle rages on...

I do not know that it is decapitating the papacy . It could be doing the papacy's business...
https://www.lifesitenews.com/blogs/pope-francis-revealing-his-take-on-synod-controversies-in-his-private-homil