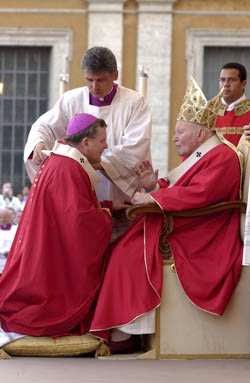 Nasz Dziennik, in an interview published on 16th, October with His Eminence, Raymond Cardinal Burke, reveals to us a number of gravely disturbing facts about the Synod, and the interim relatio.

The original Polish, may be read here.

Question: Your Eminence*, alarming information reaches to Poland about the existing work of the Synod and some content that appears there...

Cardinal Burke:  I agree with the opinion expressed by the President of the Polish Bishops' Conference,  Archbishop Stanislaw Gądecki. The text presented on Monday, "Relatio post disceptationem", that summarized the work of the synod, strikes at Catholic marriage. Discussion on the granting of Holy Communion divorced persons is very dangerous. It directly undermines the institution of marriage and its indissolubility and sacredness. The text of the  "Relatio" has many errors, and even, I would say even faulty and harmful.

Q: Currently bishops are working in groups on specific points of the working document. What results can you see, Your Eminence ?


Cardinal Burke: I hope and even believe that what will be developed in these small groups will be treated with all seriousness. So far, the work of the synod was completely dominated by the General Secretariat of the Synod. Meanwhile, it is a time of discussion, in which you have to hear each of the bishops. Most do not like is how the proceedings were conducted. Similarly, the vast majority of bishops with whom I spoke do not agree with the presented document on Monday. I expect and hope that it will be thoroughly revised and completely corrected.

Q: The final Synodal document will be published at the end of the second session next year. Does Your Eminence * think that something will change during this time?