Catholic Education Crisis: TCDSB elections in Toronto is about the fight for the souls of our children !


In a few weeks time Catholics will have an opportunity to elect Trustees who will stand up for the Faith against an increasingly aggressive, anti-Christian, secular world.

The stakes of this election are not monetary, logistical, or a debate about pedagogy per se.

The stakes are the souls of children.

Therefore, Catholics are bound before God to elect only those, who uphold, without equivocation, the entirety of the Catholic Faith. For, as St. Augustine warned Catholics of his day, to abandon one doctrine, one actually abandons all doctrine.

But all is not lost for Catholic parents in Ward Four, where I live.

We DO have an excellent candidate:
TERESA LUBINSKI 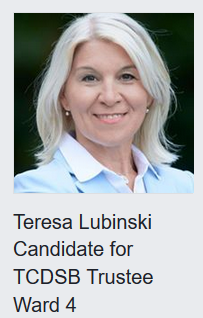 "I am a practicing Catholic who lives the faith in my family and community life. I am an active parishioner, along with my husband Mark and our children."

Diana Alpeza is a Liberal Party activist, and donor ($1548.00 - see below - is just one of many examples). Her Party affiliation is not mentioned on any of her literature. When I spoke with her and asked her whether she was affiliated with any political party, she was very evasive, and refused to answer. (Why, if you have nothing to hide? In point of fact, Alpeza has a long history of donating and working for Liberals, including the failed Provincial Liberal Party candidate, Sylvia Watson, when the latter was a Toronto City Councillor). Strike One.

When I asked her what the issues concerning Catholic education were, especially given the youth do not know their Faith, her replies were completely secular. Strike Two.

She claimed we had to go along with the State's edicts about our schools. I informed her that going along with State ideology that is against the Catholic Faith is acquiescing to fascism. She was speechless and looked confused. Strike Three.

Asked what she proposed to do about the pushing of the "LGBT" agenda in our schools, her reply was one of supporting this ideology and not answering my question about upholding Catholic teaching that homosexuality was "intrinsically disordered". Strike Four.

When I again pressed her about belonging to a political party, she again refused to reply, and claimed political allegiance was irrelevant. I countered that it is absolutely relevant, because one's ideology will influence one's activity at the School Board. Strike Five.

I then explained this by challenging her on active Liberal membership, support and why she was involved in the 2014 Election campaign, as a campaign writer, for a Party that included  euthanasia and marijuana in its Platform. Again, she was silent. Strike Six.

When I revealed to her that I knew about her very substantial donation of $1548.00 to the militantly pro-abortion, pro-"LGBT", pro-euthanasia, pro-marijuana, Liberal Party, she ended the conversation and departed hurriedly.


Luksic has been identified by Campaign Life Coalition as pro-abortion. It should be noted that all new candidates for the Liberal Party of Canada were required to be pro-abortion.

The contrast in candidates could never be bolder.

That is why is it VERY IMPORTANT that Catholics get out and VOTE for TERESA LUBINSKI.
Posted by Barona at 15:40

We hope voters support candidates like Teresa. For too long now, Catholic trustees have forgotten their duty: to defend and protect Catholic education, not the interest of activists, the unions or the government. Thank you for covering this important issue that voters sadly don’t take seriously enough.