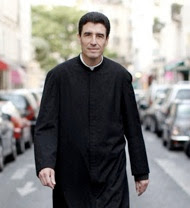 Fr. Michel Marie Zanotti Sorkine a French priest, who is also Jewish, is an extraordinary man. Inspired by Christ, this modern-day St. Paul served the faithful and all who would approach him in Marseilles.  I first came across Fr. Sorkine a number of years ago, reading about his incredible pastoral activities in a local Catholic journal, The Michael. What struck me was how Fr. Sorkine walked the streets of Marseilles in his cassock, the door of his rectory open every night until eleven. "Office hours", so prevalent amongst lukewarm priests after the Second Vatican Council, was not for Fr. Sorkine. Like his Jewish forebear, St. Paul, he portrayed that tenacity that had a messianic streak of the once chosen people.

Fr. Sorkine even established the Priestly Society of the Holy Apostles. His Society soon made its way to Belgium, at the invitation of Archbishop Leonard. Sadly, the ultra-modernist Cardinal Danneels (also publicly known for his fraternization with Freemasons) set his sights on destroying the Jewish priest's little Society. The new Archbishop, neo-modernist, De Kesel expelled the Society, whilst setting up an Islamic prayer centre at Catholic (??) schools. The Society, has finally been demolished by ultra neo-modernists in Rome: the executioners, Cardinal Beniamino Stella and Msgr. Domenico Mamberti. In late 2017, Stella obtained a decree of dissolution from the Pope.

Whatever you do, dear friends, stay with the Church during this very dark hour of error, confusion, evil and betrayal. Stay with the Church as She is scourged and crucified by the leaders of the Church, just as Christ was scourged and crucified by the leaders of the one, true religion of His time. Do not wander off to some schismatic Synagogue of Satan. There is one Church and She is the one, and only Mystical Body of Christ. Stay by the side of your Mother, the Church. Love her, stay with her, be Loyal to her and run the good race to your eternal salvation.
Posted by Barona at 18:37

Where is the cry of Antisemitism? A jew is persecuted because he loves God of Abraham, his ancestor, and His Son, Our Lord Jesus Christ.

If Christ is in absolute total control of His Church, ( And how could he not be?), then we are looking at at His permissive Will being done. It would seem that He would wants priests like this serving Him, but we cannot know His ways. I suggest that we take a quick look at the Book of the Apocalypse Chapter 22, Verse 11. Now this may not be the end of days, but His judgement is being handed down on our times and it doesn’t look like we have pleased Him by our lives. Maybe Isaiah Chapter 1, Verses 13 to 31 paints the picture that we need to see. As for the excuse for the Pope’s behavior being the Geraldine defense i.e. “The devils made him do it!” well I would suggest that he read James, Chapter 4, Verse 7. As for us, I suggest Ephesians, Chapter 6, Verse 11, ‘cause we’re gonna need it.