Pope John Paul I: "What happiness to die for Jesus Christ!" 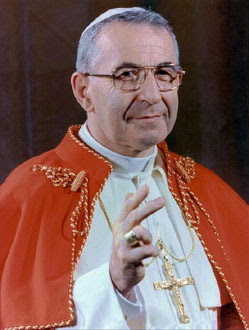 In his first Angelus Address, Pope John Paul I, spoke of St. Pius X's beatification of the Carmelites of Compiègne, who were martyred under the brutal tyranny of the masonic, so-called "French Revolution". The saintly Pope recalled how one holy nun proclaimed prior to being guillotined, "what happiness to die for Jesus Christ!". Within weeks, the holy pope too would happily die for Jesus Christ. Did the Pope prophecy his own imminent death?

Pius X, in 1906, right here in Rome, had beatified the sixteen Carmelites of Compiègne, martyrs during the French revolution. During the trial they were condemned "to death for fanaticism". And one of them asked in her simplicity: "Your Honour, what does fanaticism mean?" And the judge: "It is your foolish membership of religion." "Oh, Sisters, she then said, did you hear, we are condemned for our attachment to faith. What happiness to die for Jesus Christ!"

They were brought out of the prison of the Conciergerie, and made to climb into the fatal cart. On the way they sang hymns; when they reached the guillotine, one after the other knelt before the Prioress and renewed the vow of obedience. Then they struck up "Veni Creator"; the song, however, became weaker and weaker, as the heads of the poor Sisters fell, one by one, under the guillotine.

The Prioress, Sister Theresa of St Augustine, was the last, and her last words were the following: "Love will always be victorious, love can do everything." That was the right word, not violence, but love, can do everything. Let us ask the Lord for the grace that a new wave of love for our neighbour may sweep over this poor world.

Pope John Paul I, pray for us

There is a story told about Pope John Paul I.

I am reading a biography of Jeanne Jugan, one of my favourite saints.
Saint Mother Jugan, who had something of the simplicity of Pope John Paul I, expressed her love of the Lord in the same direct manner.

Jeanne was born in Brittany, France, in 1792.
Her whole life was lived under the shadow of the French Revolution with its fierce anti-clericalism.
The Church had to struggle for its survival.
Yet she founded the Little Sisters of the Poor after seeing a blind elderly woman who was homeless in the streets.
Jeanne took the old lady into her convent, gave her a home and friendship, and soon took in other homeless women of all ages.
The younger women Jeanne saved from prostitution.

Saint Jeanne Jugan lived to a ripe old age, though only one photograph of her is known.
Like Pope John Paul I, she shone with the joy of her salvation in Jesus Christ.
Her plain rosary beads are on display in the town where she was born.